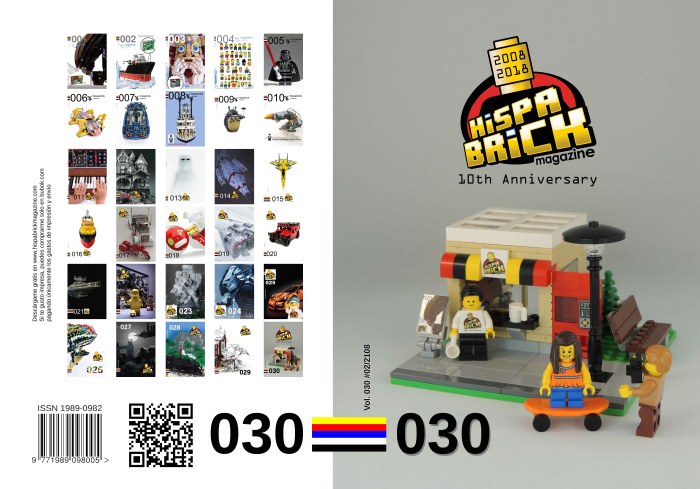 Today, is HispaBrick’s Tenth Anniversary: and Issue #30 is now available for Download:

It’s our anniversary! In this edition of HispaBrick Magazine we celebrate our 10th Anniversary with a couple of surprises.

To celebrate the occasion, we offer you the article on Alien by the arvo brothers that we published in our first issue and that you have asked to be published in English. We also interview Carlos Méndez, the AFOL who proposed the idea of HispaBrick Magazine ten years ago.

Some distinguished personalities in the AFOL world and from the LEGO Company have congratulated us on our anniversary. You will also find a timeline of the ten years of the magazine and interviews with the current staff members. In addition, we proudly present a set that was specially designed for the occasion: 1001 – HispaBrick Magazine Kiosk.

Andrea Valcanover shows us how to build a beautiful tree, Pau Padrós explains the secrets behind Modular buildings, we interview the LEGO Technic team and we offer you a report of our latest event in Mungia (Bilbao).

Of course we also have tutorials, reviews, and our usual sections, including the comic strip Desmontados, and Benny celebrating our anniversary in his space station.

Keep an eye on our Facebook page over the next few days. We have a few surprises in store for you!

HispaBrick Magazine can be downloaded free of charge in Spanish and English, so… download your copy now and celebrate our 10th Anniversary with us!

The Team at HispaBrick Magazine kindly sent me a copy of the 10th Anniversary Commemorative set – the Magazine Kiosk. The set is a limited edition (mine is 30 of 50). Consisting of a number of fairly common pieces you can probably build it too, with pieces from your own collection. Instructions can be found inside Issue 30. You can also check out some opportunities below for an opportunity to purchase the set at auction over the next few months..

The set was designed by Lluís Gibert, a member of the magazine’s editorial team. The set, depicted on the cover of HispaBrick Magazine #30, consists of a Magazine stand, and a public bicycle hire station, a common sight around the cities of Spain.

It is a quick and straight forward build, but there are some details I would like to draw your attention to:

The awning of the stand features red, yellow and black arches, the colours of the Magazine’s logo.  The roof of the kiosk is constructed from two doors, and fits on around the studs at the top of the building.

The coffee machine inside the kiosk is a gorgeous version of this kiosk essential, and the computerised point of sale unit (we used to call them cash registers) is right beside it.

The red vending machine has some elegant SNOT work to generate a half plate offset, using 1×1 corner panels and some ‘Headlight Bricks’ 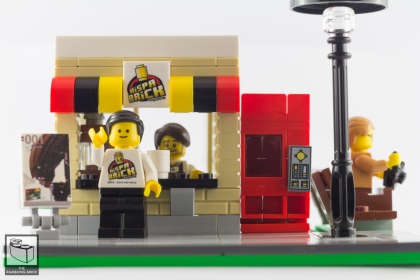 The Gorgeous printing: the HispaBrick Magazine tile and Torso, and the printed cover of Hispabrick Magazine #1.

The Bicycle stand has three medium azure bicycles, attached to the rack, waiting for our figures to hire them.

The set comes with 3 mini figures: a girl riding a skateboard; an man with a camera and the HispaBrick Magazine Mascot. It is scaled nicely to fit in with a LEGO City.  As Lluís discusses in the magazine, the bicycle stand was selected because, while becoming more common around Europe, they are yet to be featured in an official LEGO Set.

This was a fun little build and a great way to celebrate this milestone for the community.

Would you like a chance to own this set?  There will be several copies coming up for auction over the next few months: One at the Japan Brickfest in Kobe next month; another at the Skærbæk Fan Weekend, and another on auction site Caterwiki, with funds raised going to support these communities run by volunteers. Keep an eye open for them, and bid!

I have been a long time fan of HispaBrick Magazine, and was excited to meet Lluís and Jetro,  members of the Editorial Team, at the Recognised LEGO Fan Media Days last year.  It has been my pleasure to collaborate with the team on several occasions.

I would like to congratulate the team on reaching their 10 year anniversary, and maintaining an ongoing magazine format in the Internet Age. I hope that Hispabrick Magazine continues long into the future.

Have you been a reader of HispaBrick Magazine? The great news is that if you haven’t there are ten years of back issues available to download for free from hispabrickmagazine.com.