Skip to content
HomeBring Adventure to the Skies over Elvendale: Aira’s Airship and Amulet Chase 41184

Ever since I first saw the previews for 2017’s Elves sets, I knew there was one set I would want to get ahead of all others: Aira’s Airship and Amulet Chase.  This set features an Elven Airship, piloted by Aira Windwhistler; Emily Jones riding  Crossbow and Dukelin the Goblin, with his own magical flying post box…

There are two reasons I unpacked this set, and put it together quickly after bringing it home: the Goblin – this was my first experience with such a LEGO® character – and the airship, especially all of the new golden recolours.  And the curlicue.  It turns out however, that in my haste to get it put together, I failed to pick up on the elements in other colors which are relatively new. That said, these new golden elements could be well repurposed in to a steampunk construction.

The model was engaging to complete: How does the propellor work? What about the wings? What are the Goblins like? Why has Emily Jones never carried a crossbow before? Why am I attaching things to the wings? What will the play feature be?
But before we go too far, lets look at the figures we have here.

Aira: another new print with this wave, with lots of feathers around her neck, and a new color for her dress. Dukelin the Goblin, about whom we had some discussion last week. And Emily Jones: Emily now has her amulet as a separate piece, rather than printed over her shirt. I suppose this now makes it something the Goblin King can steal. This year she is wearing a sand blue skirt over her leggings.  She now has magenta shoes. Otherwise her face is one we have seen before.  But never as serious as it appears when she is holding a crossbow!

We start our build with Dukelin’s flying box, which comes across as an evil flying post box. With handles.  Dukelin can take hold and fly like a mobile best box, if such a service exists in Elvendale.

Following up on this we construct the base of the airship, complete with hidden compartment in the floor, taken directly from the Han Solo School of Contraband Smuggling. Books, maps and snacks can be hidden away in here.  A compass tucked into the repurposed hero factory shoulder pad helps the team to find direction.

Two vertical poles click into the frame for the balloon,
and allow for a more plausible method of propulsion than that permitted by the Ninjago Sky Pirate’s Airship included in the Raid Zeppelin set (70603). Always good to see the airship filled with flammable gas is not on fire…

Another aspect of this set that I prefer over the Zeppelin raid is the absence of greebles/control screens and the like leaves adequate room for the entire group of Elven friends on deck. 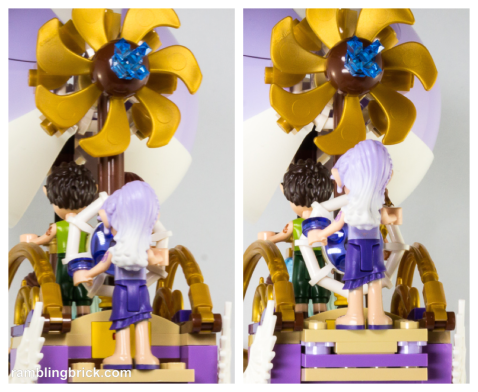 While I admire the design of this Airship – the color balance, the use of wings and propellors, and deck space – I do have a gripe. Little consideration has been given to the health and safety of the pilot of the vessel.  All of the passengers are surrounded by safety rails, however when the set is built as designed, there are no rear safety rails for the pilot AND the pilot is unable to see past the steering wheel.  Of course, you can build up the poop deck to allow Aira to see where she is going, BUT THEN you put her head a little too close to the propellor, putting her further at risk. There is no doubt that this improves the view though.

As the rear deck was put together, it became apparent that we are constructing a mechanism for allowing a flapping movement of the wings.  I cannot describe how absolutely cool this  looks and feels in action. So here is a gif…

This feels like a smoother, more gentle version of the Ninjago Raid Zeppelin from last year, although as I built it, I felt as if the ship needed more offensive weaponry – like a cannon, laser turret or even a flick fire missile.  I appreciate this may not be a key element of the Elves Aesthetic however.

That said, what the airship lacks in heavy armaments is somewhat compensated for by the light weapons carried by Emily and Aira. They have more firepower between them than has ever previously been seen in an Elves or Friends set: Emily is wielding a tile shooting crossbow, and Aira is armed with a medium lavender boomerang.

In fact against this level of weaponry, Dukelin seems to have the odds stacked against him.  Plainly Emily is a quite upset with the goblins having kidnapped her little sister. They would be well advised to return Sophie to Emily and the Elves, or face the retribution likely to be inflicted upon them.  Has nobody warned them of the dangers of upsetting a teenage girl? Perhaps this explains how Dukelin lost his eye. All of a sudden I find myself curious to see the tone that the Netflix series adopts later in the year…it could get quite dark…

Perhaps they are merely in pursuit to track down the Goblin King’s castle, hoping that Dukelin will lead them to where Sophie is held captive. By the looks of things, Cronan the Goblin King will need the power of his dragon to overcome the forthcoming raids from the elves.

What is it with Goblin Leaders not being the same kind of creature as the Goblins?

This leads me to another question concerning the nature of goblins and their kings. In two other

examples of goblins and their kings from popular culture: Jareth in Labyrinth, the Great Goblin in the Hobbit and now Our new Goblin king- none of them appear to be the same race as the goblins themselves.  In the Elves mythology, this Cronan the Goblin King uses a shadow amulet and mind control,  and is actually an evil elf.  In the Webisodes, Naida seems to be a little bit infatuated with this bad boy. Likewise, Jareth in Labyrinth is also a charismatic character, having kidnapped Sarah’s younger brother.  However, the Goblin king in the Hobbit movie is certainly far from charismatic, charming or good looking. Even in LEGO® form. I don’t expect to find the origin of this particular trop in the contents of a LEGO® Set, however the question needed to be asked.

This set was one of the ‘Must Have’ sets of the Elves/Goblins wave for me, and it does not disappoint.  Once again, the Elves sets bring a brilliant design aesthetic to the table.  The elegant golden railing work on the airship is a highlight.  The arming of Emily Jones with a cross bow leaves me intrigued as to the darkness in this series if Elves.  I appreciate that all of the Elves, as well as emily, can fit on the Airship comfortably, as they do in the webisodes of the animated series.  Even Dukelin’s flying post box is an interesting single person flyer, and is quite swooshable.

If elves has even the faintest bit of interest to you, I would recommend this set.  If airships are your thing, buy it and fill it with minifigures!