Or how I decided to curb my spending, in the face of conflicting desires. 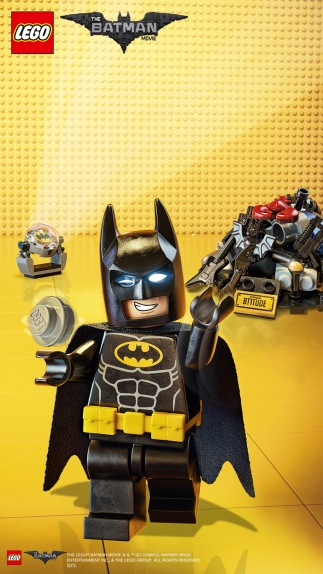 The first wave of sets have recently arrived on the shelves here, and I have found myself trying to work out how to balance my LEGO® Batman™ Movie needs (favorite characters and vehicles) against my other LEGO® desires (Elves with goblins; some classic sets and possibly even the Boost robotics system) and my basic human requirements: food,  coffee, deodorant, etc…

I have added up the retail prices of all the currently available LEGO® Batman™ Movie Sets (70900-70911) – excluding polybags, as they are rarely available here – and added in the not yet formally announced(70912-70917) with speculated Australian pricing.  This came to a total of approximately $AUD1775, recommended retail price.  Your local retailers’ pricing may vary. This is a little more than I wanted to pay out on one theme.  Even if I could get 20% off everything it would cost $1400

The sets all look really smart: the cardboard feels a little heavier than the rest of the sets on the shelves at present, and also a little glossier.  All of the sets these days have tape sealing the box, rather than punch out corners- making them easy to open without damaging the box. This makes them all the more attractive.

I just don’t think I can afford to get ’em all!

So, how shall I decide which sets to buy?

There are lots of reasons people choose to buy the sets that they do:

There are over 30 different figures in these sets, but even if you chase all Batman costume variants, it could be a challenge. Especially with poly bags involved. At least there is a standard LEGO Batman, unlike the Pirates of the Caribbean sets a few years ago, where every set had a Jack Sparrow Variant. But there are quite a few costume variants in the Movie sets, as a running joke. Most are Collectable minifigures, and in the Batcave set, but there are also a few in poly bags around the place. ( and this week,  The Disco Batman -Tears of a Batman 30607 polybags become available as a free with purchase gift through the (European/UK/Australian/New Zealand ) LEGO stores- online and bricks and mortar. America will have to wait, but not long. I may need to place an order, just so I can complete my Bat-Santa for this year! If only he had a red cape. (Wait, that’s what Superman figures are for…)

This series also allows a subtheme collection, with several sets featuring components of the Gotham Energy facility this requires the Joker Balloon Escape(70900), Mr. Freeze Ice Attack (70902), Scarecrow Special Delivery (70910), Scarecrow Fearful Face Off (70913) and Bane Toxic Truck Attack (70914).  Perhaps that layout would work well, but two Scarecrows?
Most of the time,If I am chasing down a minifigure, I generally want to put it in context. So I look to find the most appealing way to obtain it as part of a set.

My first challenge is to try and work out which characters do I really want to get, and why?  There will always be regrets.  I sure that I will regret, once again, not buying an Arkham Asylum set.  I do not, however, especially want seven extra variant villains in prison jump suits. This may well just me however, and you can get what ever you like.

I love the Batman™ Collectible MiniFigure(CMF) series. Twenty unique heroes and villains. The sets feature another 30 named characters, a few henchpersons and some characters appearing in multiple variations ( curse you Arkham Asylum and multiple novelty bat costumes!) . And this does not  include the characters appearing only in polybags.

I haven’t even started and there are around 50 mini figures to collect!

As I have already obtained a complete set of the CMF series (71017), I feel I should limit my spending on the LEGO® Batman™ Movie sets. From here, I wish to maximise my yield of characters that I really want, without plunging into downright coimpletionism!  The full range of Batvehicles is appealing, but in reality, they won’t really fit in my city layout. Or my house.  I also tend to build more using the LEGO® Friends and Elves colour palette rather than black, or even very dark grey.

How I determined my necessary purchases…

I grew up in the 1970’s and 80’s.  Repeats of the  1966 Batman series featuring Adam West and Burt Ward were a staple of after school television viewing.  So I have decided to collect my favourite characters from that series, even though I could have picked most of them up with the Classic Batcave Set (76052).  However Batgirl was not part of the minifigure lineup with that set.

The short list isn’t too hard, to start off with: Batman, Robin, Batgirl – They are all a given. From the world of the villains, I would always run with Joker, Catwoman and Penguin. I may have a Joker from previous years ago but some how I have missed out on any variation of Catwoman and Penguin (with the exception of last year’s Mighty Micros)!

While there is  a polybag with the Joker’s training ground (30523) available overseas, I am not patient enough to rely on this as a way to get a character who is otherwise present in the cheapest box set. It is only around $AUD6-8, plus shipping, so worth considering if the balloon escape doesn’t appeal. And you reduce your excess Batman count by one.

Penguin comes in two sets: the Batcave break in and the arctic roller. I am aiming to complete my ‘must haves’ as easily and cheaply as possible. While the batcave also has Bruce Wayne and Alfred, and multiple batsuits, as well as the penguin it’s is significantly more expensive than the Arctic roller, and doesn’t have nearly as good use of the white balloon panel!

But then sentiment gets involved:

Mr Freeze and the Riddler also played a significant role in the classic television series.  The Mr Freeze set features the new mechsuit cockpit, as well as appropriately scaled hands.  The Riddler features a hat with hair and a slew of minor villains as a bonus in his set. These are both  among the next cheapest sets in the first wave.

Then there are other, less obvious choices:

I discovered comics, as a tertiary student, through the gritty, dystopic, mutant gang ridden Gotham that was the setting of Frank Miller’s “The Dark Knight Returns.”

I then became a regular reader in the run up to the ‘Knightfall’ storyline, where a venom fueled Bane breaks every villain out of Arkham, and then literally breaks Batman. The bigfig Bane harks back to  Kelley Jones’ unrealistically proportioned artwork of the series, and is certainly appealing.

And then Clayface: as a character in the animated series of the 1990’s, he was a tragic character, and has moved on to find redemption in the current pages of Detective Comics.

I admit, the scarecrow figure in the second wave looks great, possibly the best version of this character that we have seen for sometime(And this will make three in twelve months), but I have never really found him an appealing character.

The first few choices: Batman, Robin, Catwoman,  Joker, Catwoman and Penguin can be achieved for less than $AUD110- Maybe less if you can cheaply source the Joker polybag. Add Mr Freeze ($35) and the Riddler ($55) and we are at $200. Gulp!

But in reality,  the Riddler has no appeal to me in this iteration (70903), and the B-list crooks aren’t a deal maker for me.  I have a Riddler in my collection, bothering the Flash in his Dragster (76012 Batman™: The Riddler Chase).

I also have a Mr Freeze minifigure from his days in the Arctic with Aquaman and Batman (76000: Arctic Batman™ vs Mr. Freeze™: Aquaman™ on Ice),although I covet his new hands for mech suit construction with Lance’s mechsuit cockpit.

Bane and the mutant fugures, due to be released later in the year in 70914: Bane Toxic Truck Attack for approx $AUD85 are quite exciting, but the vehicle holds little appeal to me.

I rarely purchase minifigs using Bricklink.com, eBay or even from vendors at shows. But these guys may be the place to start. I also lack an Alfred from any source over the years. Perhaps the bricklink price of around $8 isn’t so bad…

I’ll probably look at Clayface in the near future: the brick built villain just looks fantastically organic… and all that medium nougat.

Does this mean I don’t find the Batcave(70909) or Arkham Asylum(70912) appealing? Not at all.  I also think the Scuttler is an fantastic and intriguing looking vehicle.  The Speedwagon Batmobile is remarkable for its parallel parking prowess.

I just don’t think they will represent value for me.  I’m not really a collector.  All I seem to have a collection is  sets I haven’t yet built, and incompletely sorted pieces. I am unlikely to seek them them all, as by personality I tend to be a hoarder. I just threw out my 30 year old first year university notes last weekend. If I were to become a completionist I would run out of space too quickly.

So I am happy for the big sets to sit on the shelves and be picked up by somebody  who really wants them. I fear that once I step on the road to completionism, I won’t be able to get off. We are already aware of at least 50 different minifigures associated with the movie. I suspect more shall appear. So I shall allow myself to be happy with just the few that I have justified to you all today.

The bigger sets look fantastic if you are a fan of the vehicles, and are looking for a source of pieces with which to build something exciting in black, or very, very dark grey!

Of course, this may change for me after the movie opens. Which won’t be until the end of March in Australia.

9 thoughts on “The LEGO Batman Movie Sets: Seeking Moderation in the Interests of Balancing the Household Budget.”