Last week we looked at the 2×4 brick, and talked about the fact that it’s a bit harder to come by in new sets than it was back in the ‘olden days’.  I was a little surprised to discover it had made its natural home in the world of Minecraft, rather than in the Classic theme.

Classic become the primary non specific  ‘creative play’ LEGO® theme in 2014, following on from Bricks and More, Make and Create and in turn, early Creator sets. One of the things that has distinguished Classic from the earlier themes is the variety of colours in the overall LEGO® palette. Over 30 colours may appear in some of these sets (the creative building boxes have around 500-600 pieces each, and recently have featured latest 35 colours over the last few years.

Many Doors and Windows

I recently picked up a copy of the 2017 Creative Building Box 10703, with the box proclaiming ‘many doors and windows…’ Indeed, at least 29 windows, and 5 doors.(This is the volume otherwise occupied by 156 and 120 1×1 bricks respectively.)  Last year’s set was a little light on for these features, so I thought an opportunity to increase my supply might be a good thing. I thought this might allow me to rapidly deploy some buildings into my Town landscape.

With 503 pieces, 37 different colours and a RRP of £19.99, €24.00, $AUD39.99 and yet to hit the US market at this stage – but 10702 from 2016 cost $USD29.99; this is certainly a colourful box, with all of the suggested models being buildings.  This is a set devoid of wheels or eye-tiles, both of which we had a variety of in last year’s equivalent set.  The majority of parts in this set are basic bricks, plates , sloped bricks and windows.  There are also a variety of doors – including two angled doors; angled bricks, greebly parts, tiles, fences and arches.   END_OF_DOCUMENT_TOKEN_TO_BE_REPLACED

When LEGO rebooted their ‘generic brick’ sets last year as ‘Classic’ I was pretty excited.  Whilst I enjoy the creator and mini figure containing sets, the building often feels a little bit constrained. It’s like we aren’t being encouraged to experiment too much with building any more.  Now, my early experiences with lego were before the release of the mini figure, and in those early days, box art would often demonstrate alternative builds without instructions.  So the classic sets are available in a variety of sizes and price points, from $AU25 (224 bricks) through to the $90, 1500 piece, creatively named ‘Large Creative Box’.  In between are a variety of building sets and also ‘supplement sets’ these $AU30 sets come without wheels or plates, but a variety of bricks, as well as some ‘eye tiles’.  There is even a ‘bright’ supplement set: featuring much of the Friends color palette. I would love a ‘landscape supplement’ full of greys, greens and browns, but leaving out the purples and trans red and so forth…

The box is shaped like an old school toy box, made of corrugated cardboard and  contains several transparent poly bags, filled according to color family.

These images show us all the colour, and representative of the parts selection. I ran out of space in my light box so… 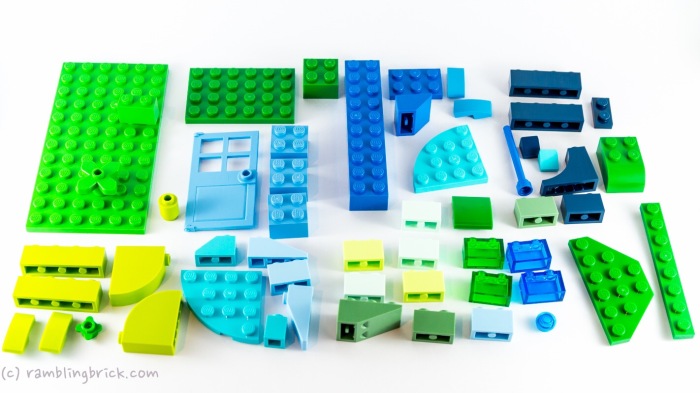