Let me take you back to Fabuland.  First released in 1979, this was one of the first themes for which story telling was central. Fabuland was the first theme to be released in parallel with a series of books and was supported later by an animated television series.  Designed to fit into the range somewhere between Duplo and ‘normal’ LEGO Bricks,  Fabuland sets continued to be available until 1989.

With around one hundred sets produced over this time, there were over eighty different figures produced. The sets were designed to be able to be assembled by children as young as three, and as such developed larger elements compared standard building bricks during the course of their run.

In the best story telling traditions established at Marvel Comics, the majority of the Characters have alliterative names: that is to say their first and second names started with the same sound: – Leonard Lion, Morty Mouse and so forth. (Marvel characters often follow similar naming conventions: for example: Peter Parker, Stephen Strange, Reed Richards, Sue Storm and Bruce Banner, to name but a few.) Earlier examples of anthropomorphic alliterative names would include Mickey Mouse and Donald Duck (also known as ‘Anders And’ in Denmark)

I was recently sent an old print advertisement for Fabuland, produced around 1984/1985.

As I read through it, several things became apparent:

Of interest, the tag line associated with the Fabuland logo translates to “Stories/Fairy Tales you can build.  For children from 3”

I was surprised at how many of the animal names were extremely similar to their English counterparts: Lejon-Lion; Valross – Walross; Katt – Cat; Hund – Hound/Dog; Mud – Mouse; Krokodil – Crocodile. At the same time, there are plenty which do not: Gris – Pig; Kanin – Rabbit; Papergoja – Parrot; Björn – Bear; Räv – Fox; Mås – Gull and Flodhäst –  Hippopotamus (interestingly enough –  Flodhäst is a compound word: literally River horse)

With help from the usual suspects: Brickset’s database of sets, as well as their archive of catalogues, Bricklink, and some unusual suspects such as fan site Fabuland.net, which gives a list of names, along with images ; as well as the LEGO History Website, which also has a list of all the (official) English Names of the Fabuland characters, I set about comparing the names listed in the old print advertisement with those we names we knew in English: 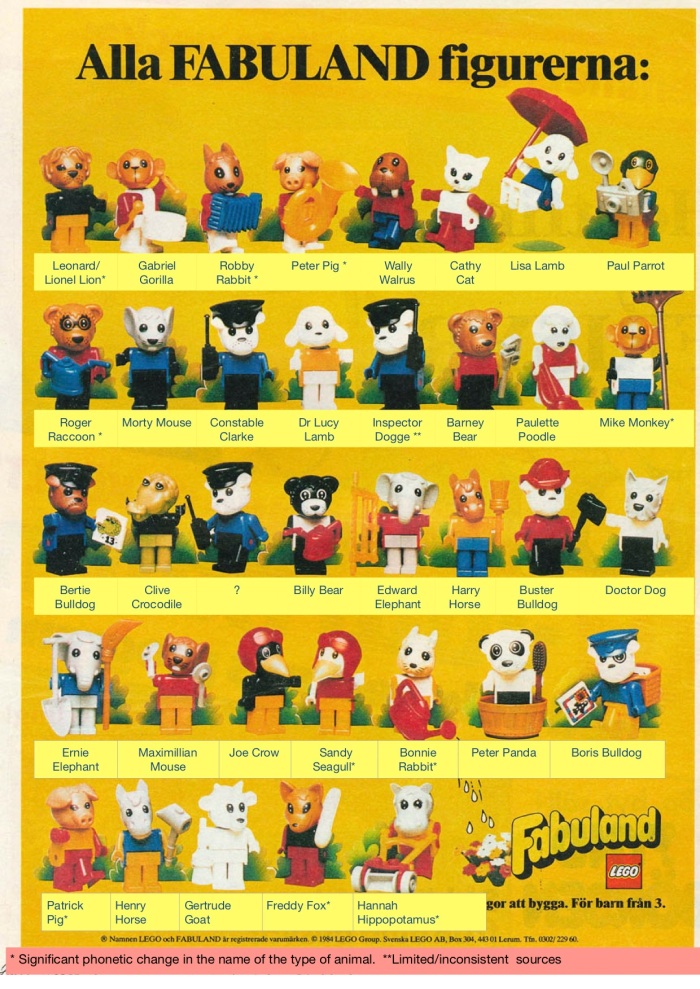 The animals listed above, with significant changes between Swedish and English spelling  – Gris, Kanin, Räv, Mås and Flodhäst – have undergone significant renaming to maintain alliteration.  Other than the policemen, the only ‘non-alliterative names’  still involve a degree of word play: Joe Crow is a rhyming name (I suppose it could have been made Joe Jackdaw, however) and Bonnie Rabbit  – Which becomes a suitable pun, given the similarities in sound between ‘Bonnie’ and ‘Bunny’

Leonard Lion is the Mayor of Fabuland, in the 1980 LEGO catalog; however Lionel Lion is the only Lion’s name appearing on the ‘Official English names List.’ The name Lionel does appear as a teacher in the 1979 UK Catalog: Lionel Lion’s Classroom 3647.

Also of interest in this advert is the large number of similar white bulldogs: The Swedish advertisement ( and possibly there TV series and books) have a much wider variety of names on offer than the official LEGO list ( note – some of the unused names on the official list belong to fireman/bulldogs)

In summary, I found it interesting that the need for alliterative names resulted in some significant name changes along the way. If you grew up in a market with a different language to those seen here, did any characters have a significantly different name?

By the way, next year will see the 40th Anniversary of LEGO Fabuland’s first release.  How would you like to see it commemorated? A re-release? Collectable minifigures? Some other tribute? Why not leave a note below. I will come back to look at some of the Storytelling used in LEGO Sets and beyond in a future post.  Until next time,