Have I been dragon my feet?

I appear to have been discussing LEGO Dragons on this blog a little more than I do in real life.  I have no good explanation for this.  Of interest, dragons appear in LEGO sets a little more often than they appear in real life.  Coincidence? I think not.  Dragons are creatures inspired over the years by human imagination, and LEGO bricks are intended to inspire the human imagination.  Earlier this year, I looked at the Fire Dragon’s Lava cave: Part of the Elves Dragon’s Series this set contained some great scenery, but the brick built head was not entirely to my taste at the time.   Kai’s Elemental Dragon (70602) was an impressive dragon, and the head featured interesting use of arches.  However, the final effect was fairly large compared with the Elves Dragon’s heads. 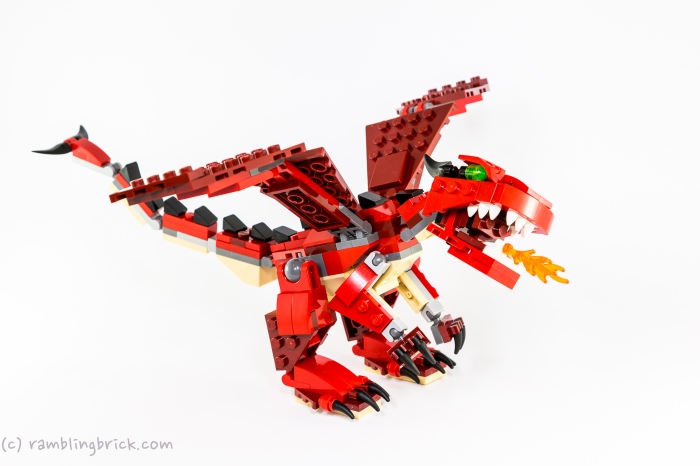 Red Creatures (31032) was released at the start of 2015 (this means anytime between early December 2014 and February 2015, depending on where in the world you happen to be standing.) At the time of its release, it was overshadowed somewhat by the release of 31031 – the Rainforest Animals.  This colourful Creator Set featured a brick built parrot, with a controversial play feature. I didn’t see red creatures around the department stores in Australia, but it may have been on limited release around some of the independent toy sellers.  There always appear to be a couple of small Creator sets on shop.lego.com that don’t get general release on this side of the globe.  The current Park Animals (31044) and Future Flyers (31034)would both appear to be in this category [NOTE: this is a tip for anyone seeing them in an airport, or overseas, wondering what sets to buy for their LEGO fans back home in Australia.]

This set is relatively inexpensive as creator sets go: it is still available from shop.LEGO.com for $AU19.99.  With 221 pieces, it is just under the $AU0.10 per piece.  The majority of pieces are either red or dark red – predominantly plates and wedge plates – but there are also red tiles 1×2 with a single stud and curved slopes. Bionicle and Mixel type ball joints once again appear in dark bluish grey (although the larger sockets appear in red, and smaller sockets in light blue grey). There are some tan plates and inverse slopes. Black tusks, teeth and cheese slopes also feature.  Plenty of click hinges allow of a high level of posability – with 19 points of articulation – ball joints are used for hips, shoulders, ankles and wrists, as well as the base of the skull.  Construction of the torso, limbs, wings and the tail are fairly straight forward.

Everything comes to a head…

Construction of the head is different to the rest of the build, however. 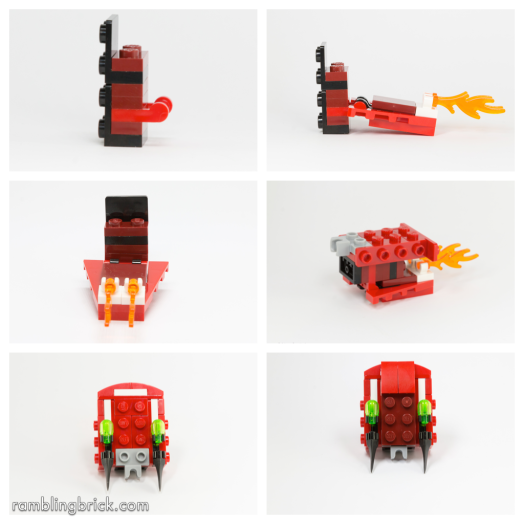 This is what drew my attention to this set, and I was not disappointed.  The core of the head is built around two 1×2/2×2 inverted brackets. This SNOT technique once again demonstrates the five plates high to two studs wide ratio.  The lower jaw hinges onto this core, with its shape given by red wedge plate 4×4.  White modified plates with clips on the lower act as teeth, and hold onto small flames. 1×2/1×4 brackets go to allow construction of the side of the face.  Wheel arches provide menacing brows over the eyes. 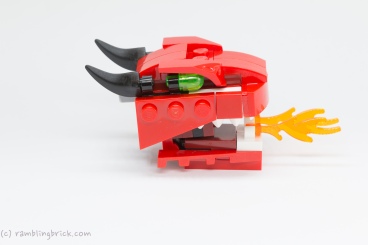 The head’s final dimensions are 4 studs wide, 5 studs long and 4 bricks (12 plates) high. It lacks the wedge shape of the elven dragon, but has a significant level of detail present.

The other featured models in this set are a scorpion and a serpent.  These alternate builds have not excited me in the same way as the primary build.

If you are a fan of dragons, or want to see a nice example of how to set design an animal head, I would recommend this set.  It also contains a great variety of red and dark red wedge plates: I suspect in the hands of an avid spacer, this could quite easily become part of a terrific dark red winged space craft…maybe even part of a microscale Red Dwarf – now that would be an inspirational alternative build.

The build demonstrates the use of click hinges to ensure the wings remain in position, some interesting SNOT techniques to ensure the shape of the head, and reminds us that larger ball joints are required for primary weight bearing limbs, as models increase size. The use of  tan pieces on the underside reminds us of the natural colouring patterns of reptiles.

I award this set 3.5 out of 5 Arbitrary Praise Units.  I love the dragon, and its ability to hold a pose; I also like the inspiration provided by the brick built (well, plate built) head.  I was not happy with its general lack of availability around australian retail stores, but inexpensive sets like this make it possible to easily bring our shop.lego.com purchases up to the $AU200 required for us to qualify for free shipping down when we only ordered $183 worth of LEGO…

What have you wished you were able to pick up in your local shops, rather than order from the other side of the world?  Why not comment below?