Santa pauses by the beach on his busiest night of the year. 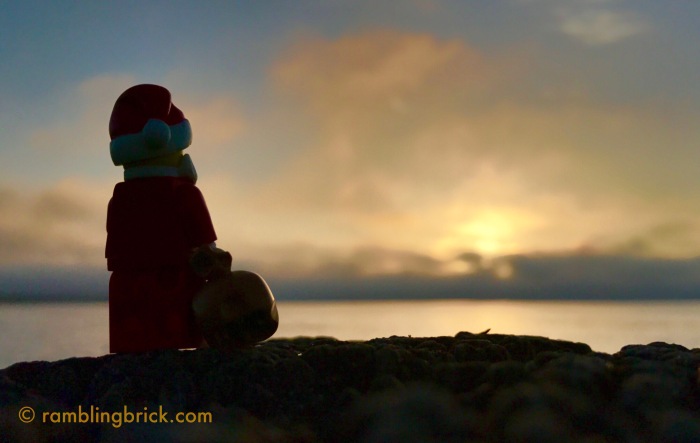 Well here we are… Christmas Eve. Have you been naughty or nice?

Today we pull apart our snowman, and our sleigh to build the Jolly Man in the Red Suit.

I have nothing to say about this other than this is a terrific ‘mini- miniland’ build. The detail of his beard and the arms, as well as the buttons on his ? Belt. ??coat?

And so many presents!

We at Rambling Brick Headquarters would like to wish our readers a Merry Christmas, happy holidays or seasons greetings as you so choose.

We will take a few days off, and probably be active on instagram over this time.

Enjoy your break if you have one.
Play well.

It’s the day before Christmas Eve.  If you are in the Northern Hemisphere (or indeed on Cradle Mountain in Tasmania), and it is cold and snowing, why not build a snowman.  Built around a SNOT Core, the head is rotated forty five degrees to the body and has two coal eyes and a carrot nose (well, an orange cone anyway!)

We have only one more build left after this one… Who could you possibly be hoping to see on Christmas Eve?

After a successful introduction in 2016, the Skyline Series of LEGO® Architecture sets return.  Three sets are being released in 2017: London 21034 – previewed at the Leicester Square flagship store opening ; Chicago 21033 and Sydney 21032.

Now, I am not particularly ornithologically inclined. So while I can recognise today’s build as a couple of birds, I am hard pressed to pick the actual species. Each bird is made of eight pieces, making today’s build amongst the simplest that we have seen in this particular series. With two days to go, and only one more model revealed on the box art, I am left wondering what is in store. It’s beginning to feel a bit exciting.

So… you know Christmas is on the way when Santa’s sleigh starts to get a mention.  Today’s model is a sleigh, with a few Christmas presents on.  But there is no one to pull it.

With around 27 pieces, there is no doubt as to what this represents.
Noone to pull it you say? What about yesterday’s dragon… minus an eye because we needed the light bright green plate for the present? 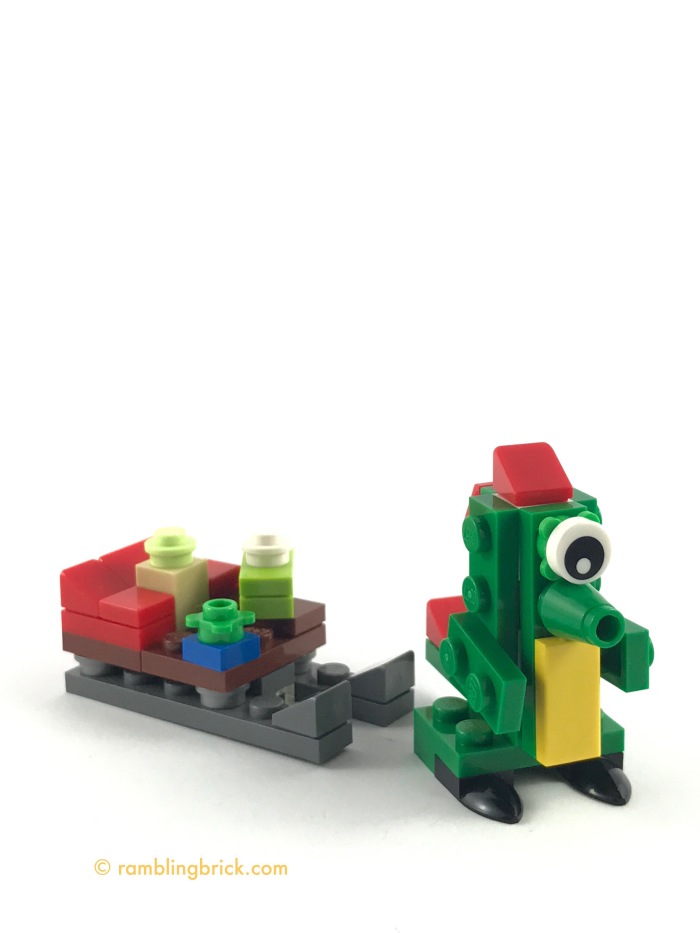 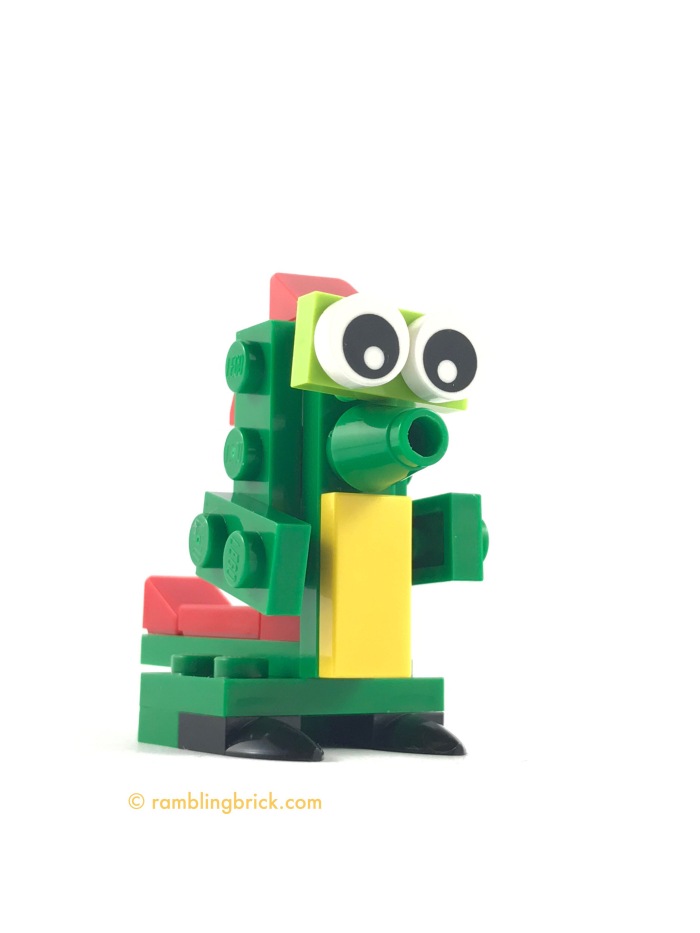 Our Christmas buildup continues today with a dragon. Or lizard man. Both are cool.

Great use of SNOT bricks, red cheese and green plates, to say nothing of the cone and mixel eyes, means that this character is just about perfect.

He compares pretty favourably with the lizard mascot figure from the collectable minifigures: 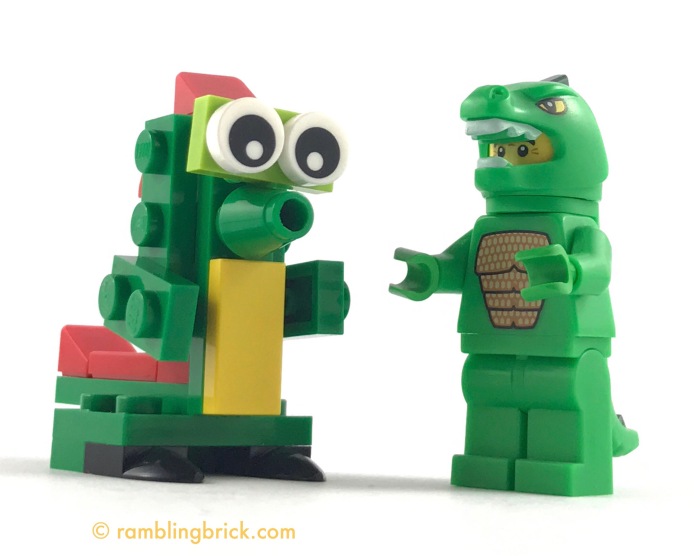 This build does many things right in many different ways. I give it 5 out of 5 arbitrary praise units.
Play well

During the holidays, people like to move around to catch up with their friends and family.  They may use boats (day 1); airplanes (day 7); Trains (day 16) or some form of road based vehicular transport, which is how I interpret today’s build.

Using round 1×1 plats as wheels, a transparent cheese slope and plate for the windows, you know you are really moving with this one! 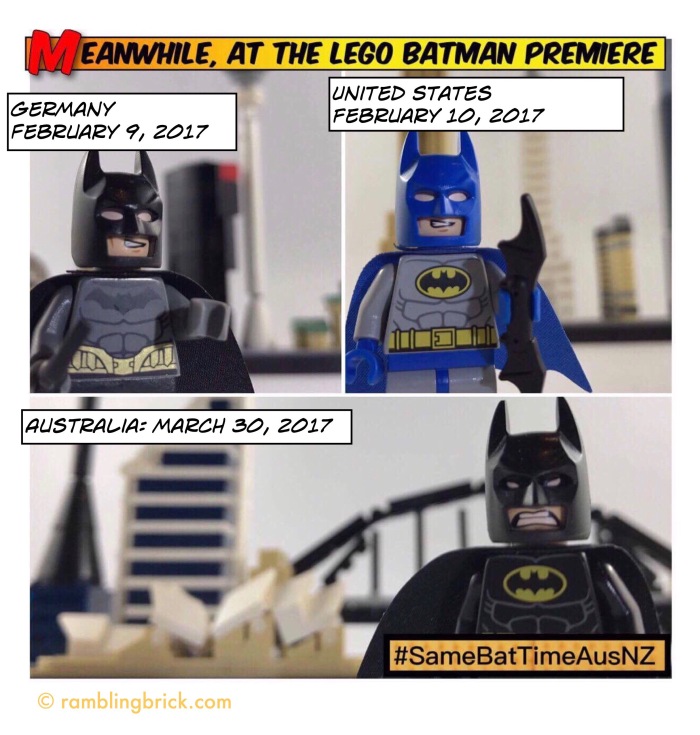 THE LEGO Batman movie looks like it could be the best Batman movie to be released  in 25 years. It is extremely disappointing that the Australasian release date has been pushed back to the end of March: forty eight days behind much of the rest of the world.

On top of this, Village Roadshow, one of the film’s production partners and distributer in Australia, have won an injunction in the Australian Federal Court to require all Aussie internet service providers to block the Pirate Bay and a number of other torrent/ movie streaming sites of dubious legitimacy by the end of January 2017.

Just in time to prevent early pirated copies of The LEGO Batman movie from being illegally downloaded by enthusiastic people, desperate to see the new film before all the spoilers spill into the internet over the next FORTYEIGHT days before the Australasian release!

In 2014 at a forum on Digital Piracy,the Co-CEO of Village Roadshow Graham Burke, spoke of the mistake made when The LEGO Movie was released after a two month wait, costing Village Roadshow around five million dollars.  He spoke of a desire to bring Australian release dates in line with US release dates and that it was not right to delay release of this Australian produced film ( animated at Animal Logic in Sydney) in Australia.

This does not appear to be a concern on this occasion however!

This court decision is staunchly defending the rights of the distributors and content creators. I have no issue with this. However, I wonder if they will be able to get an injunction to block online spoilers from reaching Australia?

A number of the Australian LEGO blogs and Instagrammers have launched #SameBatTimeAusNZ as a social media tag to raise awareness and pressure Village Roadshow into reducing the delay between International and the Australian release dates.

#SameBatTimeAusNZ is not about piracy. It is about globalised distribution, the opportunity to enjoy the film before online spoilers flood the online environment and corporate honesty.

Let Village Roadshow know that we are unimpressed with the decision to delay the release of The LEGO Batman movie for 48 days after the international release.

Day Eighteen has a nineteen 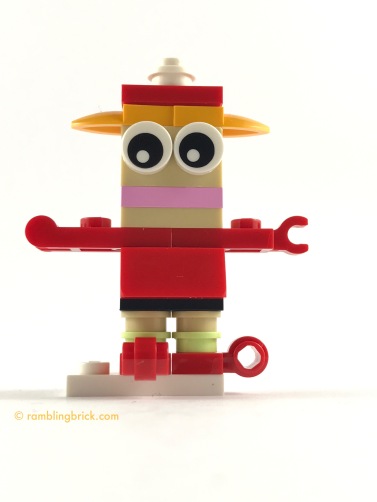 piece build which goes where none of the builds in this set have gone before.

I see a child, with a beanie on, blonde pigtails in a skirt, with what appear to be impractical shoes for snow play.  A great brick built figure, this is elegant in its simplicity!

This is a whole new style of build for the set, and I wonder if we will see a few more before Christmas arrives.