Skip to content
HomeArchitecture Skylines Go Down Under: 21032 Sydney

After a successful introduction in 2016, the Skyline Series of LEGO® Architecture sets return.  Three sets are being released in 2017: London 21034 – previewed at the Leicester Square flagship store opening ; Chicago 21033 and Sydney 21032.

As with the previous LEGO® Architecture and Ideas sets, the Sydney Skyline comes in a sturdy cardboard box.  The parts are in four polybags inside. Once again the instruction book is a beauty to behold:  As with others sets of this type, the first few pages of the book are filled with lovely photos of the buildings in the wild, as well as a little about their history.  The youngest of cities referred to in skyline sets to date, all of the buildings in the Sydney set are from 1936 or later.

The buildings represented (in order of age) are:

Of these, the Opera House and Harbour Bridge are truly iconic buildings. Both  instantly recognisable as part of the international image of Australia. Sydney Tower, and Deutsche Bank Place are both distinctive in the Sydney skyline, and there inclusion here is understandable.

Under the harbour bridge there are two double tooth pieces, representative of the sails of yachts, frequently seen sailing in Sydney Harbour. They break up the lines of the base nicely.

There are a number of elements which appear to be new for 2017, some of which may be exclusive for the time being. These are essentially recolours of existing components. 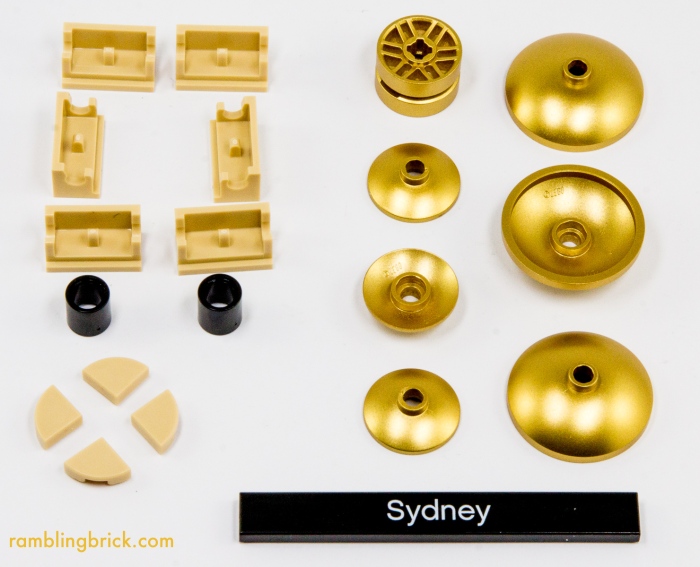 The 1×1 tile, quarter circle, appears for the first time in 2017 in tan (BL)/ Brick yellow(TLG) This tile appears as sliced fruit in 2016, and now we have it postively unadorned!

We get a solitary wheel in metallic gold, which may well be the same as featured in the Joker’s Notorious Lowrider (70906). Also appearing in this colour for the first time are 2×2 and 3×3 parabolic dish’s (radar dishes)

There are 2 ‘tubes’ – listed as 1 stud technic girder, these accept a stud at either end: serving as a way to reverse the directions studs may be facing.

And of course there is the printed tile, featuring the word ‘Sydney’

The build is relatively straight forward. I’ll look at all buildings in turn, but first we start by constructing the base: ultimately covered in water, it measures 23 studs wide, and 4 studs deep for the bulk of the model, although the Opera House sits out a little to the front.

After construction the star of the piers at both ends, we then add the span.  The span features two clips at each end, and six offset plates. ‘Wands’ of varying lengths are used to simulate the upward girders, with a clipped together modified plates work to approximate the curve of the bridge. 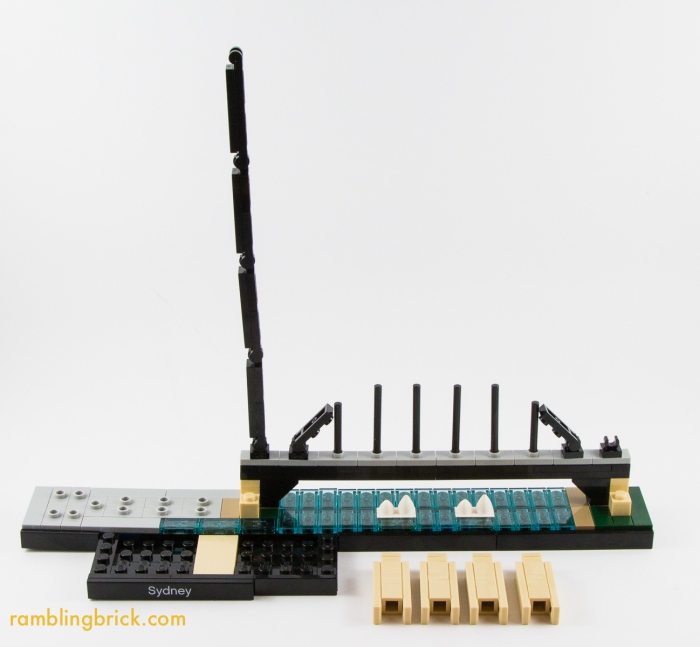 There are 2 yachts racing each other under the bridge.The pillars at either end are constructed using tan bricks with 2 studs on the side.

These pillars produce an extremely satisfying finish to the bridge.

Next we build the Deutsche Bank: Essentially a stack of clips and plates. The combination of dark blue and white works well together.

At the top, the building narrows  – which in real life is to reduce the shadows cast over the central business district.  This is represented satisfactorily by shorter plates, and the staves attaching to a clip and folding over to form the sleek lines of the roof. This part of the build is fiddle, but not complicated.  The result compares favourably with the source material.

The Sydney Tower, still referred to as ‘Centrepoint’ despite the naming rights changing several times, has been dominant over the Sydney skyline for over 35 years.  The cables which are intrinsic to its stability are represented here by cones.  The clever use of new Technic elements in the shaft allow studs in the upper part of the tower (the Observation Deck) to be inverted.  The alternating use of gold and black radar dishes gives the impression of the floors with windows, against the gold of the turret itself.

Fun Fact: the observation deck of Sydney Tower is operated by Merlin Entertainment, who own and operate the LEGOLand parks around the world.

At the base of the tower, layers of dark blue and transparent blue plates make up the shopping  and office complex.

This is the third representation of the Sydney Opera House in a LEGO® set.  And the Second in the Architecture range (previously seen in 21012)  The only building in the world to have had more than three representations in official LEGO® sets is Westminster Palace/ Elizabeth Tower/ Big Ben (21023,10253, the new  London Skyline 21034, and some of the Cars® sets – 5828 DUPLO Big Bentley; 8639 Big Bentley Bust Out). The Sydney Opera House is certainly one of the iconic buildings in Australia, recognised around the world.

We build a sturdy base for it, incorporating many offset elements first, and the set up the Opera House proper. 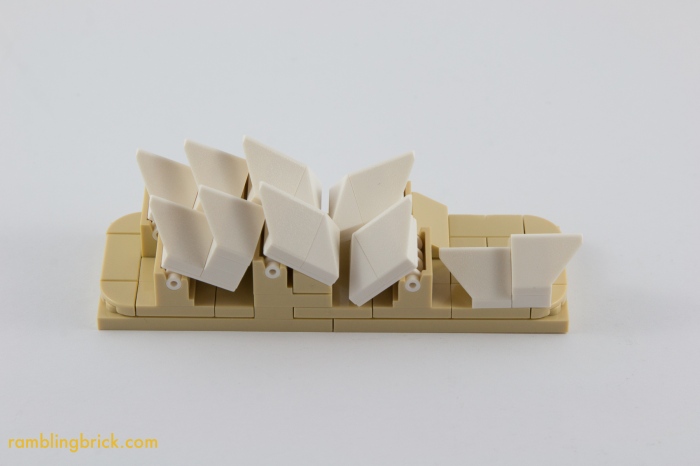 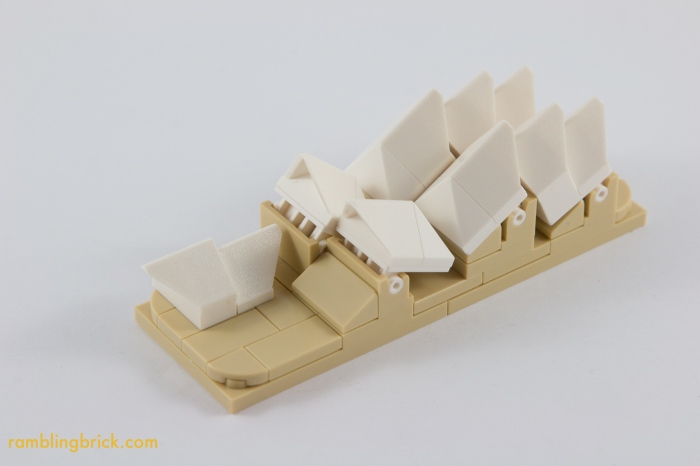 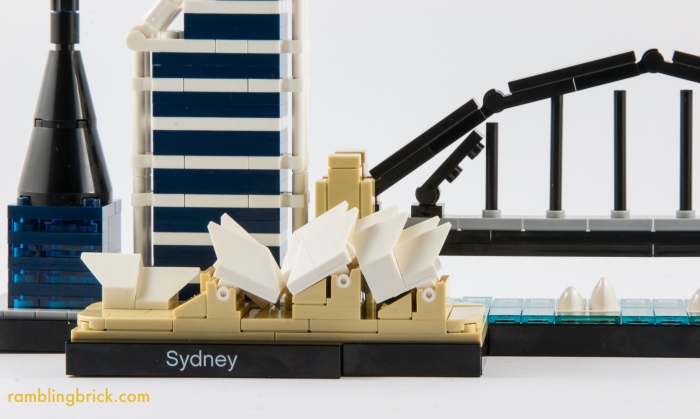 While the actual Opera House is almost entirely constructed of curved shell like shapes, the representation here is very straight and angular, using straight slopes.  The use of the tan hinges to angle these bricks is very effective, and the overall effect of the shape of the Opera House is maintained.

It is fantastic to have an Australian City recognised in the Architecture Skyline Series.  While it does feel a little like the Sydney Opera House is being revisited a bit too frequently, this new version is quite different in appearance to previous versions.

I like the design of the turret on the Sydney Tower, the lines of Deutsche Bank Place and the overall design of the Opera House. I especially appreciate placing the Sydney Opera House in front of the other buildings.  This gives a feeling of depth to the build, that was otherwise  lacking in some of the 2016 Skylines.

It is hard to represent all of these buildings in the same scale : in part this is because the Harbour Bridge is absolutely massive in real life.  It is almost as if an element of forced perspective has been incorporated in the model, with the left side of the model a larger scale than the left.

It is not a long build, taking less than an hour to complete. However it is a little fiddly, given the small elements involved in the construction.  The final effect is a great display piece, which sits nicely on its own, or next to the other Skylines.

It is great to have an expanded Australian Skyline incorporated in the LEGO® Architecture series.  The new elements for 2017 included in this set are interesting, and have the potential to be quite useful in MOCs.  Hopefully they will appear in other sets as well, to reduce their exclusivity.

As with other Skyline sets, this is simple enough for construction by the non LEGO enthusiast.  It holds great appeal as a souvenir of one of the worlds great cities.

As an Australian I am excited to see this set appear, and while I may prefer Melbourne as a city to live in, I cannot deny that the buildings chosen for this set are unlike anything elsewhere in the world (with the possible exception of Sydney Tower).  I enjoyed the build, and there was sufficient variation in the techniques used in putting the different buildings together to keep me interested.

I give this set three point five out of five Arbitrary Praise Units.  The Sydney Skyline goes on sale in 2017 and has 361 pieces.

Thanks to the LEGO® Community Engagement Team for providing an advance review copy.  All opinions are my own.

One thought on “Architecture Skylines Go Down Under: 21032 Sydney”