In which I supersede my soft light box with a quick trip to the local hardware shop, for less than the cost of medium size LEGO set…This gives me a place to take pictures of Voltron, who has learned some new moves.

Over the last couple of years, I have used a number of techniques to light and photograph LEGO Models and minifiugres here at the Rambling Brick.

I started out using a relatively minimalistic set up, using a phone, a foldable light with baking paper as a diffuser, and a piece of white paper.

Before too long, I started using a small, reliable ‘Soft box’ – with two compact fluorescent tubes, some diffusing fabric and folding up into a convenient carry case. This has been my mainstay of LEGO® photography over the last few years. It is pretty good for most smaller, which have a footprint of less than a square foot.

Voltron 31211: this set challenged my sensibilities with regard to what I could fit in the light box. In real life, I don’t have the space for a dedicated studio, with large lights. A bit of bench space in my build room is all I have. (you can read my review here)

But it was time to revisit my photographic setup, ideally while maintaining enough budget to pick up one of the new Powered Up trains. Perhaps I will need to look at the passenger train rather than the freight train now. I took my inspiration from my friend @frostbricks, who recently shared images of his kitchen table photo studio on Instagram.

END_OF_DOCUMENT_TOKEN_TO_BE_REPLACED

From days of long ago, from uncharted regions of the Universe comes a Legend: The Legend of Voltron, Defender of the Universe! A mighty robot, loved by Good, feared by Evil. As Voltron’s legend grew, peace settled across the galaxy….

During this review, we will build the lions, form Voltron, consider the lessons learned and finally , compare it with a prebuilt Voltron toy…

I was excited to be offered the opportunity to review LEGO Ideas 21311 – Voltron .  As I previously confessed, Voltron was not a major part of my upbringing. However, I have been catching up in recent days with the 1980’s cartoon series ( which in turn was based on the Japanese Anime ‘Beast King GoLion’). Others may prefer to take in the current Dream Works Series, Voltron: Legendary Defender, for a more contemporary tale, with a reduced serving of cheese.

After a quick revision of a parallel childhood, I felt qualified to look at the box.

It is a good sized box: similar in size to that which contained the Saturn V Ideas set, released just over twelve months ago. This box, however, contains 2321 elements, waiting to give a hefty dose of nostalgia to any child of the 80’s. In fact, you don’t have to wait to open the box for that feeling: the box art cries out 1984, with the background artwork shading from red to purple to the blue of a startled, with an underlying grid drawn in for good measure. Voltron, the giant, compound super robot almost fills the cover.  In fact, it is printed slightly smaller than actual size. The back of the box shows how Voltron is made up of the individual Lion elements, as well as highlight the sword and shield. The process of the LEGO Ideas program is also outlined.

On opening this set, I had a pleasant surprise. Many sets that I have opened this year seemed to have had their ‘contents settle during transport,’ with many boxes being barely half full of LEGO Bricks. This box appeared to be almost 80% full.  Excitedly, I emptied the box over the floor revealing the bags inside: all 16 of them!  These came with six manuals: One detailing the construction of each lion, and the final one showing how to build the shield and sword,  transform the five robot lions into Voltron, and provides some background information on the television series as well as some notes from the design team and the fan designer. The manuals came in a sealed plastic bag with a sticker sheet.  This sheet however, only had five stickers, for numbering the lions (as occurred occasionally in Voltron: Defender of the Universe, but not the original Japanese series). For the purposes of the review, I did not apply them. You could argue in favour of using printed elements here, but I suspect many will prefer the look without stickers.

In the cartoon, each of the lions is piloted by a human, and it is a little disappointing not seeing the pilots represented here. However given a variable crew roster, and uniforms not matching up to the colours of the lions, not to mention the relative scale of the lions to a human, a minifigure representation might not be entirely appropriate.  Indeed, there is not even space inside the heads of the lions to contain a microfigure. I’m sure someone out there will develop a creative solution.

END_OF_DOCUMENT_TOKEN_TO_BE_REPLACED 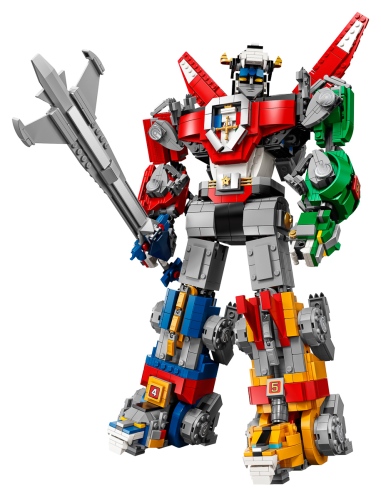 Back in 1984, a Tuesday if I recall correctly (lets be honest, some of these facts are lost to the mists of time), I was starting to get a little grown up. Or at least imagine that I was. Playing with LEGO® Bricks was not holding the appeal that it once did, and cartoons were starting to feel a little childish. I was on the edge of a slippery slope. As such, Voltron – Defender of the Universe passed me by. Well, not entirely: I knew it was there, but I didn’t feel compelled to dash home after school to watch it.

Fast forward to 2016, and my son sits me down in front of Netflix, and introduces me to Voltron- Legendary Defender. No longer compelled to be a cool 16 year old, I find it quite engaging, with occasional random cows.

A a couple of months before the new series debuted, Leandro Teyag (len_d69) submitted his version of the classic Voltron LEGO Ideas.   END_OF_DOCUMENT_TOKEN_TO_BE_REPLACED