In 2007, a new breed of LEGO set was released: the modular building.  The first offering, the Cafe Corner (10182) was revolutionary: the subject matter of Lego City, perhaps set in an older, simpler time, but with a scale that was appealing to AFOLS.  The design standard – specifying the placement of the technic bricks to bind adjacent models together, as well as defining the size of the footpath and alleyway at the back of the building – has inspired the theme as well as countless MOCs and LEGO cityscapes around the world.

That Very First Modular- the Cafe Corner had very little in the way of internal detail, but set a standard this has changed as the series has developed with detailed interiors for shops, homes and other miscellaneous  businesses one of the highlights of the series. In those early days, the LEGO Factory site referenced design ideas for interior design .

For me, seeing these sets at a public show is what dragged me out of my Dark Ages. I remember constructing the Green Grocer, a year or two later, and discovering new (to me) parts usage as well as special secrets that only the set’s builders would know about such as….(but that would be telling!)

Set up as three floors of shops/professional consulting suites, the businesses include: a bakery, florist and café; music store, photo studio and dental surgery and an upper level dance studio and an apartment featuring a rooftop terrace. Even at first glance, you can see some design cues taken from the older modular sets: 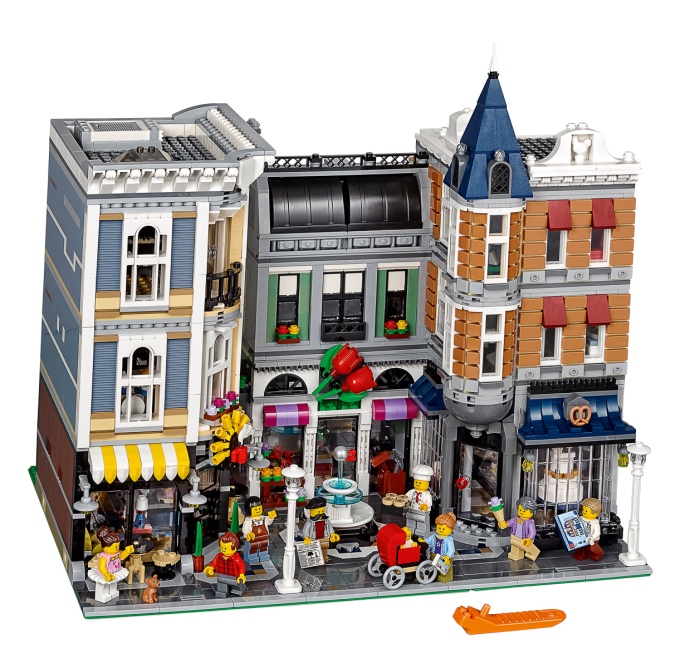 There are eight adult Minifigures and a baby included in this set. Like all Minifigures in the modular line, these feature the classic ‘smiley’ face. All of the mini figures have great characterisation, and there are lots of new elements to be found.  One of my favourite figures would have to be the musician, with his receding ‘Peter Venckman’ hair line.

There are also some terrific new elements to be seen in the designer video including :a

Recolours include a 1×1 tile in nougat; a silver 2×2 radar dish; a curved window arch with spokes in black; and a new window for the dentist’s office: “Prevent yellowing.”  Sound advice for those of you without ageing, sun damaged LEGO Bricks.

Read on to see the details from the Official LEGO Press Release, see some more images and read about some of the easter eggs that designer Jamie Berard has tucked away in this set for us to enjoy: END_OF_DOCUMENT_TOKEN_TO_BE_REPLACED