Skip to content
HomeConspiracy or Coincidence III: Helicopters- from Red Cross to the Star of Life [626/6626 vs 60179]

In which I look at a couple of helicopters, with 40 years between their release dates, consider what happens when a humanitarian organisation reclaims its trade mark and contemplate the special place that helicopters have in the world of LEGO® Vehicles… 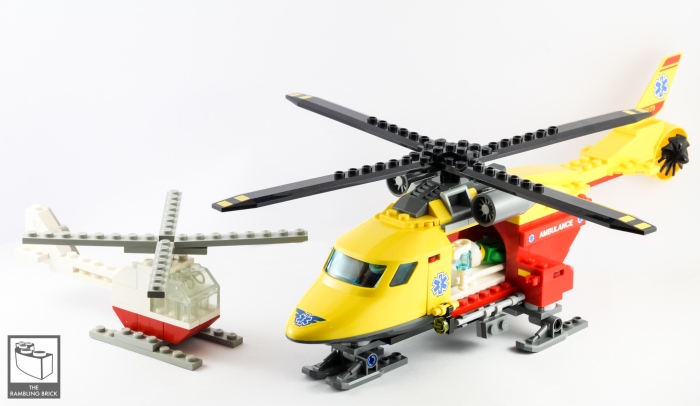 As has been previously discussed, this is a year for celebrations at the LEGO Group. We have seen sixty years of the LEGO Brick, forty years of the minifigure (celebrated with the release of the series 18 Collectable Minifigures), and twenty years of Mindstorms.

While we have the recurrent police theme (even with the new mountain setting), some , miners, as well as last year’s fantastic jungle theme still on the shelves, we also have the ‘Great Vehicles’ sub theme. Now, I recognise that there is a limit to just how many different vehicles might be presented in LEGO Set form over the years. This year however, we seem to have a number of sets that give more than a passing nod to sets that were released twenty, thirty and forty years ago. 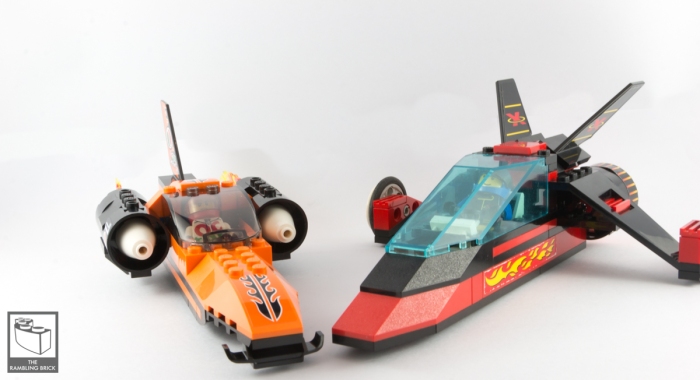 Here at the Rambling Brick, we would far rather believe in a conspiracy than a coincidence, and so I would like to believe that these might be a covert celebration of sets celebrating their decennial anniversaries this year. In recent months we have discussed the JetCar and the Helicopter Transport Truck. Today, I would like to compare some  helicopters- specifically the Red Cross Helicopter from 1978 and this year’s Emergency Helicopter. While the Helicopter from 1978 may not be as obvious counterpart to today’s set, compared to the the helicopter carrier and speed record car, there are a number of interesting comparisons between then and now that I would like to make today.

First, let us start with the change in the markings used…

From the Red Cross to the Star of Life

The Red Cross is a registered trademark of the International Movement of the Red Cross and Red Crescent.  The symbol of the Red Cross has been used on military medical installations/ vehicles and personnel to signify their humanitarian mission. Civilian use has been discouraged, however, outside the use for representing the Red Cross Society. The ‘Star of Life’ was created in the early 1970’s after the American Red Cross complained that the safety orange cross on many ambulances was too similar to its own symbol.  This emblem features a six pointed star, with the Rod of Asclepius (a healer in Ancient Greece) in the centre.

As you can see from the images of the 1978 sets: 606, 626 and 623, LEGO Town did not have a consistent scale. The original ‘ambulance’ (606) was 2 studs wide (plus wheels), and the supplied minifigure could not even sit inside.  The car (623) was 4 studs wide, and could seat a minifigure, but no casualties.  The helicopter (626) has a cabin which is three studs wide, and skids which are five studs apart.  A more ‘minifigure scale’ helicopter was produced in 1976 (Europe 386, US 770) and remained on the market for several years: this set also included an ambulance, as well as a number of the rigid ‘proto-minifigures’ and a stretcher made from a 2×8 plate. Perhaps it might have been a better subject for comparison, but it is not celebrating a 40th anniversary this year… 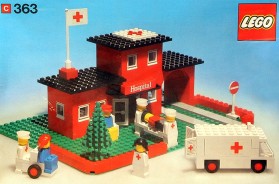 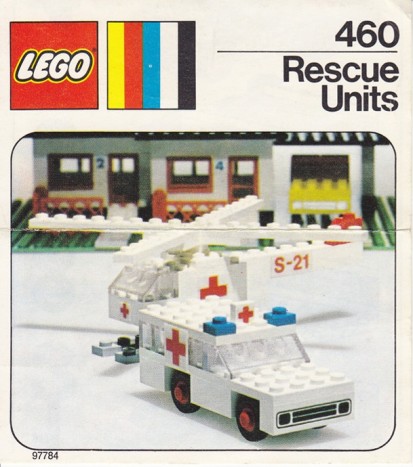 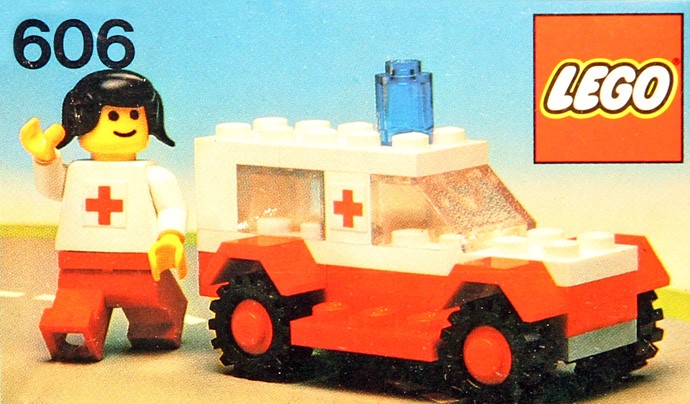 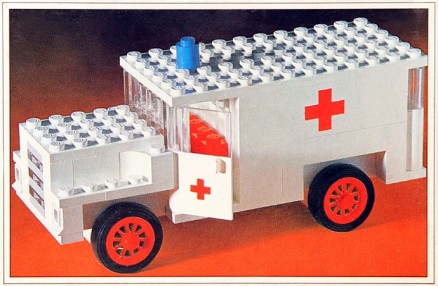 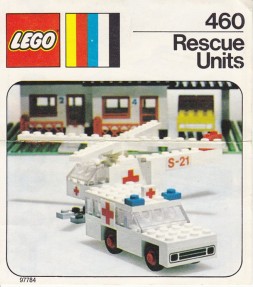 The Star of Life began to appear on LEGO Sets in 1994, on ambulances, helicopters, air planes and medical centres, in both system and Duple sets. 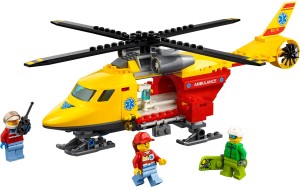 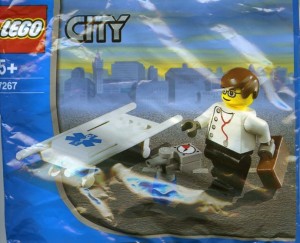 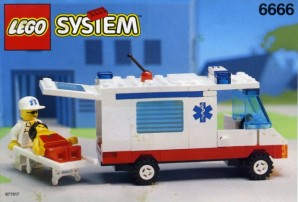 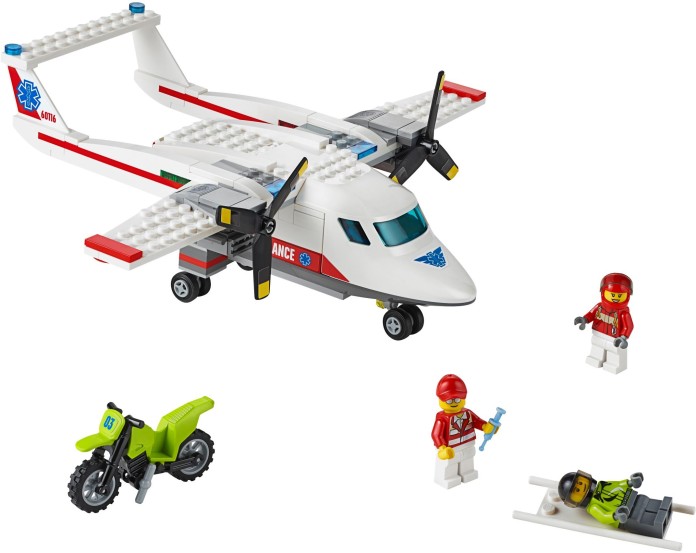 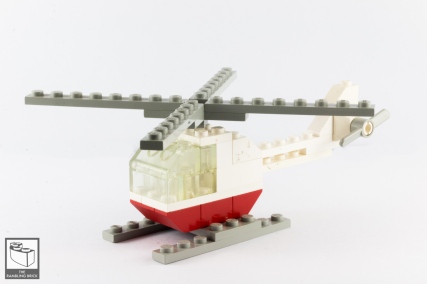 But this year is 2018, 40th anniversary of the minifigure, so I would like to focus on the Red Cross Helicopter 626, also celebrating its 40th Anniversary this year.

Released in 1978, this set has 37 pieces, and at the time had a price of $5.50.  I purchased a used set on Bricklink.com for similar price, and base my thoughts on that experience. My set arrived unassembled, in a ziplock plastic bag, with the original instruction sheet included.  Stickers had previously been applied to this set, and as such were not present: the drawback here being that the stickers were initially positioned in such a way that they covered several bricks, making dismantling the set a little challenging without destroying the sticker.

I had been planning to savour this build – stretch it out as long as I could.  However, there is a limit as to how long you can take to assemble a set consisting of thirty seven pieces.  This was a set designed to be but together quickly and easily, and played with as soon as possible.

Of interest was the layering technique used with the 1×2 and 2×2 bricks, overlapping to provide of strength.  The transparent elements have crazed a little over the years, increasing in opacity. this is to be expected.

The appearance of a drive shaft running through the tail boom to the tail rotor is simulated through the space between 2 plates, and I found it to be remarkably effective.  I thought it odd that in the premiere year for the LEGO Minifigure, this set is one of the few town sets where a figure is not absent, and the vehicle is quite off scale, as many vehicles were in those first few years of Classic Town!

As we pass through forty years, our LEGO Town has grown into LEGO City. The vehicles have also grown in size:  vehicles such as cars and trucks are  far more likely to be starting at six studs wide, rather than the original two to four, and so it is with the Ambulance Helicopter 60179. Resplendent in yellow and red, it bears more than a passing resemblance to rescue helicopters in service around Australian coastal airspace every summer. Of course, the model we see here is emblazoned with the Star of Life, rather than the real life financial institution that sponsors the service. As is the norm for many contemporary LEGO Aircraft, this one features a moulded nose piece (6x10x4). This is however, the first time it has appeared in Bright Yellow.

This helicopter looks great: lots of curves and angles, thanks to the nose, and the hull that fits underneath of it. The varied curves and slope on the back upper fuselage provide added realism. The yellow wedge plate that serves as part of the tail plane sits well, as does the tail fin and the rotor fan/turbine elements. Internal detail is provided through the addition of an IV flask and syringe pump; there are also external spotlights mounted on the sides.  The back wall of the cabin folds down, allowing the stretcher to be slid inside. Previous emergency helicopters, built at a similar scale, have not demonstrated the level of detail that we see with the internal fittings here, especially once stickers are applied.. 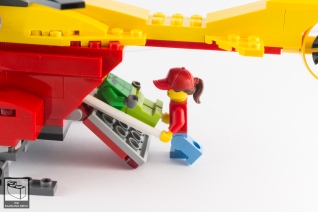 We have 3 minifigures in this set: a helicopter pilot/paramedic, a paramedic with a nifty ponytail poking through her cap and a snowboarder, who has come along for the purpose of having accidents, and providing the paramedics with something to do. The minifigures all have detailed printing on their torsos, single faces and have unprinted legs.

And it is possibly because of the minifigures that my main contention with the helicopter comes into play.  While the helicopter appears roomy on the inside, it is impossible to sit a minifigure up in the back cabin of the helicopter. How is our casualty going to be appropriately cared for?  It is only a plate or two’s thickness that prevents this from happening, and I would have thought that it might have been possible to somehow fit in, either at the top to the bottom. It might be possible to lower the floor a little, to allow our paramedic to fit, but it might affect the structural strength somewhat. Other than this, I cannot fault the design

Are we approaching the Helicopter Event Horizon? A critical mass of helicopters?

I admit, there is not a lot to compare between the helicopters I have presented today. In fact, LEGO Town helicopter models could barely get more different…

The new one is significantly larger than the 1978 model, but other helicopters released in the mid seventies, particularly set 386, have a similar size.  That set, however, was released before the minifigure first appeared, and has the stiff, faceless ‘proto-minifigures’ that debuted in 1975.

Similar sets were released  – such as 6691 in 1981: one of the last uses of the red cross; 6697 in 1985: a yellow fuselage, and neither red cross or star of life, but ready to drag you out of the ocean, none the less. It was perhaps not until 1998, with the ResQ helicopter 6462 that we saw another large helicopter, with space enough in the rear cabin.

In fact, today’s nostalgia ‘copter is completely unlike any which has appeared in Town or City subsequently: all subsequent helicopters have ensured that a minifigure can sit inside, whether four or six studs wide. 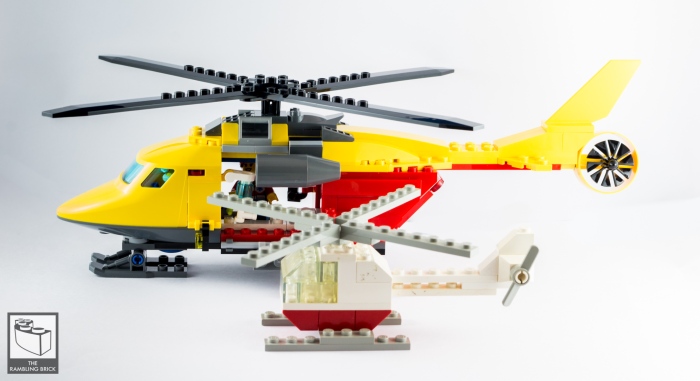 The appeal of helicopters as subjects for LEGO construction is undeniable. I believe that they are the ideal model to give a child, still learning about the way the world works:  If you are holding a truck, it looks a bit funny until you put it on the ground, and move it back and forth. But it can’t really go sideways. If you are holding a helicopter, you can hold it in the air or on the ground. You can hold it still, or move it in any direction: all of them are possible, and completely within the range of a real one.  Whether it is hovering, swooping or swooshing, or just plain stuck on the ground, a helicopter will never quite be out of place. Except looping: that might just be a little too perilous.

It feels as if every year there are more and more LEGO helicopters available to build. Perhaps there are. Have we reached Peak helicopter, with an annual level of steady state saturation? Or are we heading towards a LEGO Helicopter Event Horizon, where every LEGO set contains some form of helicopter? I am afraid to look right now, but perhaps I’ll look into it for a future post (how hard can multivariate mathematical modelling be, anyway?)

In summary, this is possibly the loosest thread holding together my ’40th Anniversary of LEGO Town/City revising old sets theory,’  The helicopters compared do not really occupy as a similar space in the market, or indeed the imagination.  One is solely for swooshing or display, while this year’s Emergency Helicopter acts as a display/swooshing piece, a source of role play material, with the 3 LEGO Figures.  Both have their strengths and weakness, and as such they both receive three out of five Arbitrary Praise units. However, I think this connection runs closer to coincidence than a covert conspiratorial celebration.  What do you think?

There are some other sets from ’78, 88 and 98 that I remain curious about, but I will come to discuss them once the Bricklink orders arrive.

With the LEGO Group teasing a new LORD OF THE RINGS themed set on social media today, I was reminded of this MOC that I exhibited at #Brickvention back in 2012. This was before the first range of sets had been revealed. I hope my building and photography skills have improved in the meantime. #lego #lordoftherings #legomoc #legolordoftherings #ramblingbrick #nostalgia
Now on the blog, our review of the 60384 Penguin Slushy Van
I was playing with 60384 Slushy Van, and wondered if Commander Cold might retire from oddysey base, and buy into a Slushy franchise? #lego #legocity #legoiceplanet2002 #febrovery #ramblingbrick #iceplanet #legospace #slushyvan
The RamblingBrick turned 7 this week.
Today we celebrate the 65th anniversary of the patent being filed for an interlocking building brick system. More on the blog later #legoday #legopatent #legoanniversary
Checkout our review of the sweet 40639 Bird’s Nest on the blog. https://ramblingbrick.com/2023/01/27/40639-birds-nest-hands-on-review/