Skip to content
HomeMay the Fourth Be With You: Tatooine Battle Pack Review

Today is May the Fourth, the day when a pun is allowed to take over marketing of Star Wars related LEGO® sets for a limited time only, with a variety of special offers in place, changing daily.  Check Shop.LEGO.com in your country for details.

“If there’s a bright centre of the galaxy, you are on the planet that it’s farthest from.” – Luke Skywalker

When Star Wars debuted in 1977, Tatooine was the first alien landscape we encountered. A harsh, unforgiving desert planet, bathed by the scorching heat of binary stars, we see people enter a daily struggle against the environment: farming moisture to survive; fending off hostile desert nomads and dealing with diminutive scavengers. We see a variety of exotic megafauna, some just skeletons, some utilized as low maintenance transport in an environment which treats life forms and machine with equal contempt. It is far from the attention of authority: smugglers, gangsters and fugitives make this planet their base of operations. We also see hope: cautious optimism in the face of a deadly environment, a place of refuge from the Empire, and spectacular twin sunsets! It was a long, long time ago, and the locale took us to a galaxy far, far away…

And yet with its exotic locations and importance to the overarching saga- events take place on Tatooine in five of the first six movies- the indigenous races: Jawas and Tusken Raiders remain shrouded in mystery. And indeed , in my opinion,  sadly underrepresented in LEGO Star Wars sets.

But was it just in LEGO sets, or was this a systemic problem for these characters?

Fast forward to a not so long time, a lot more closer to home. When Star Wars was first released (in those days, there was only one film!), Kenner released a range of Action Figures.  The first wave was simple and obvioius: Luke Skywalker, Darth Vader, Princess Leia Organa, Han Solo, C-3PO, R2-D2, Stormtroopers and Ben (Obi Wan) Kenobi.  The back of the blister pack offered something far more enticing to come: Death Star Commander, Jawas and Tusken Raiders.  There was probably another, but at the time I was too busy trying to fit Luke Skywalker into a LEGO X-wing Fighter which I had built to pay any attention.

We waited and waited for those Jawas and Tusken Raiders.  Eventually they hit the shelves.  By the time I had saved up the money and convinced my parents to drive me to the toy shop, they were all sold out.  I was 9 years old. This experience has been repeated time and again.  I am slowly learning the value of release day urgency.  Life does interfere, however.

Perhaps it is this experience. Perhaps it is the fact that Jawas and Tusken raiders are under represented in the LEGO Star Wars in general. Most likely, however, it is because Jawas and Tusken Raiders represent the ‘alien’ races first encountered by audiences in the original film that I was drawn to the 75198 Tatooine Battle Pack. Jawas have appeared in three sets and one advent calendar previously (10144 Sandcrawler; 75059 Sand Crawler; 75136 Droid Escape Pod and the 2015 LEGO Star Wars Advent Calendar. Tuscan Raiders have received slightly less love over the years: 7113 Tusken raider encounter, with printed heads, followed over a decade later with 75081 T-16 Skyhopper and 75173 Luke’s Land speeder following a new head sculpt in 2015.)

The two Jawas have different torsos, and both feature front and back printing.  They are both new in this set. They also carry stud shooter guns, with transparent light blue studs, to represent the ion blasters used to disable droids as they scavenge their way around the Jungland Wastes of Tatooine. Their heads are black, except for two yellow eyes, with a feint orange trim, and they have reddish brown hoods. There is no printing on the arms, or on the short legs.

The Tusken raider has a molded head with spikes.  I am not sure how I feel about this mold.  I prefer the idea of a printed head, as seen in 7113 back in the early days of this century. The torso has printing front and back (but not on the arms), and the printing extends to the legs on the from.  This appears to be the same figure that has been seen in several sets since 2015.  There is a Gaffi Stick, built from small elements. 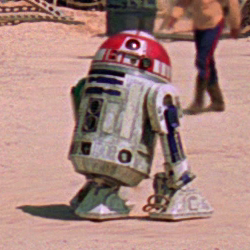 The astromech droid, R3-T2, has a red domed head, with printing all round.  The main body however, only features printing on the front.  This does leave the figure feeling a little lack lustre in my mind. This droid was seen in the original film/A New Hope/ Episode IV as Luke drives his land speeder into Mos Eisley.

The remaining elements go towards making a small, tracked vehicle: some sort of mini sand crawler.  These battle packs have come with a variety of constructibles in the past, from speeder bikes, to implausible gun emplacements.  In part, these are necessary.  While LEGO have the ‘construction toy licence’, Hasbro has the  licence for Star Wars Action Figures.  The constructible vehicle becomes necessary to ensure the lines do not become too muddied.

Fun Fact: around the time of the release of The Empire Strikes Back’s initial release, Kenner started to just invent vehicles for the action figures to battle and travel in. These vehicles bore no real relationship to any vehicle seen in the movies.  Are these Battle Pack models, in part, a nod to this heritage? Let me know what you think.

The Model is in part functional, able to role play a droid pick up and delivery to the main sandcrawler, While it feels a little small and forced, compared to the grandeur of the Jawas’ gargantuan Sand-crawler, it can carry the Jawas and the droid.  Just in time for them to be attacked by the Tusken Raider.

The figures are the standout for me in this set, although perhaps another Tusken Raider would be welcome.  I would have appreciated a spare handle element amongst the spare parts, but it is sadly lacking.  This means I still need to quest to replace the one munched by my dog, while I was building Thor’s Weapon Quest. This is not a truly relevant point.

The vehicle is a little ‘meh’ on first appearance, but after putting it together, I feel happy that it was a considered build, relevant to the subject matter. It adds to the play value of the set. I was less impressed, however, with the lack of rear printing on the astromech droid.

After forty one years, the Tusken Raiders and Jawas remain shrouded in mystery. Their relative scarcity over the years in LEGO Minifigure form makes this Battle Pack a welcome addition for fans of the desert setting of Tatooine. It would be easy to justify buying several copies. Admittedly, there are no actual documented battles between Jawas and Tusken Raiders, but the potential for an uneasy relationship between the two is hinted at in A New Hope, where Ben and Luke speculate on the possibility of the Sand People attacking and ransacking the Jawa Sand-crawler, before concluding that it was performed by Imperial Stormtroopers. I give the set 4 out of 5 arbitrary praise units.

What has been your favourite Battle Pack Build over the years? How are you going to commemorate May the Fourth this year? Building the UCS Y-Wing, Millennium Falcon or something simpler? Attending a screening or fan event? Why not share your plans in the comments below.