I am a fan of Lego. I have a room full of it

I am a fan of Batman: I have collected over 20 years of Batman/Detective Comics and other related titles (so: another room full of it…)

I should love Lego Batman.  But I don’t.  Don’t get me wrong: I love the idea, but for me, I have never really had the vision for a great Batman MOC, and haven’t been grabbed around the throat and shaken about while a set screams “BUY ME” as part of my internal monolog.

Getting a set with Batman in isn’t really that hard.

Getting a good set with Batman in is slightly harder.  I have picked up a random smattering of sets over the years.  But when I remove the cowl, I have always felt a little let down by the ‘Look, over there: Bruce Wayne is wearing a headband’ look (I should have made a Tennis Match MOC..note to self).

So today, I bought one of the cheapest Batman sets I have ever seen.  And I think it has the most Versatile Batman Head Ever in it.

I am talking about 76061: Mighty Micros: Batman vs. Catwoman. I picked this up at a local department store for $AUD17. It has a cartoonish inspired Batman and Catwoman, driving 2 teeny cars.  The Batmobile is mostly Black, with yellow highlights and rear fins: touches reaching back to the Tim Burton/Michael Keaton film of 1989. The front Spoiler is printed.  Catwoman, not ever really known for a novelty self branded vehicle since the 1960’s, has a little purple buggy, with a 3 way 1×2 slope, with printed eyes for a ‘nose cone’. And a Tail. ‘Cos she’s Catwoman.  The purple color pays tribute to the colour of Catwoman’s costume ‘back in the day’ – particularly the 1970s, as well as the launch issues of her ongoing series launched in the 1990’s.  There is also a carton of milk and a Diamond. 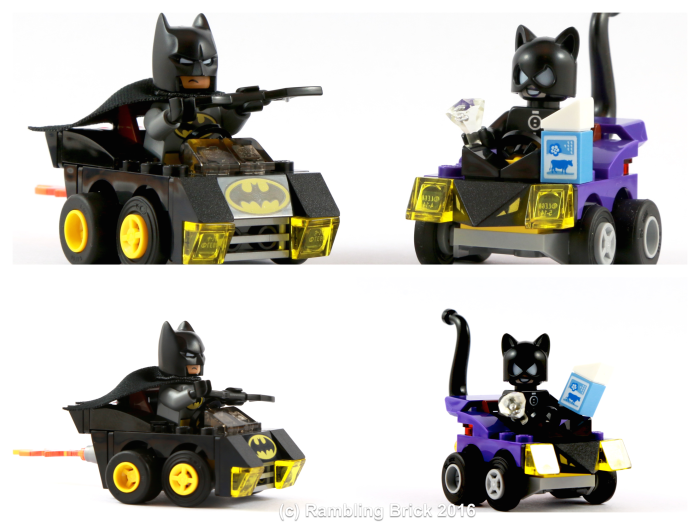 The Diamond is a no brainer: Catwoman stole it/ Batman is trying to get it back.  The milk: is it ‘Because she’s a cat’ or because the 1960’s Adam West version of Batman loved Milk and Cookies whenever out and about?

Here are the Vehicles.

Both figures have simplistic printing on their torsos, with their belts continuing around the back.  No muscles.  No Muscles on Muscles.  We should be glad the Minifigure designers haven’t attempted a Kelley Jones style abdominal muscle torso print. This one is quite refreshing in its simplicity (Dark Bley, no muscles and mini legs)

When you remove their masks, both have printed Black heads.  Catwoman has a white, eye mask, so she works even without her normal ‘over mask’.  Batman is seen to be… a black baclava with mirrored sunglasses (and an awesome smirk).

No head band with strange spots.

No white/glow in the dark balaclava with visible face.

No other variations (their are no alternative faces).

I have compared the Batman figures I own below.  they are from (Left to Right:10672 –  Juniors: Defend the Batcave; 70817- Lego Movie: Batman and Super Angry Kitty Attack; 76012: Batman the Riddler Chase; 76044Clash of the Heroes and today’s Special Feature:76061 Mighty Micros: Batman vs Catwoman.

This new Bat-head could be a hiker, skier, adrenaline juke, extremely cool stuntman or extreme dwarf.  Certainly a refreshing change from ‘Man with Sweaty Forehead.’ And he remains anonymous, even after removing his cowl.  I’ll have to admit, I don’t mind the glow in the dark balaclava. But incorporating glare from sunglasses into the eye sockets is kind of cool!

And he has the new ‘soft, spongy cape.’ No crush, and super flexible to fit into any vehicle.

I quite like this set.  It captures the essence of classic bat mobiles, and the figures have a presence.  I haven’t looked too hard at the other sets at this stage.

Its a quick fun build.  I like the simplicity of the Batmobile while nodding towards the 1989 model. The color of Catwoman’s buggy is a great nod to her past too.

And to think I didn’t want this set – I was after 76063- Flash vs. captain Cold, but this sets does not have quite arrived in Australia yet!

You should buy at least one of these sets.  Unless you really don’t want too!