Skip to content
HomeSeeking Inspiration With ‘NEXO Knights: Build Your Own Adventure’ [Review]

Every so often a builder runs out of ideas.  It doesn’t matter whether you are a child or an adult. Now and again you say to yourself ‘I don’t know what to build!’

This might be becoming a more and more frequent complaint as we enter a culture of building a set and leaving it built. The creative spark almost extinguished as the direct result of years of targeted marketing and passing through the education system and getting a job.

Certainly, entering life as an AFOL, I found it harder than I should have to dismantle sets that I had built from the instructions.  Some have never been dismantled.  Admittedly, included in this number are the Cafe Corner and Green Grocer, so some would suggest I would not be blamed for leaving them intact.  But I have accumulated a good number of city, and regular creator sets over that time to establish a functional supply of bricks. Sometimes I feel inspired to build,other days it is a hard slog.

And so, while I was failing to resolve a case of Builder’s Block under my own steam,  Penguin Random House sent me a copy of  NEXO Knights: Build Your Own Adventure.  It landed on my desk with a resounding thud, and provided appropriate inspiration.
Dorling Kindersley’s Build your own Adventure Books have been around for a couple of years now. They follow a tried and true format, with the goal of encouraging the reader to build models to fit in with the storyline described, and the latest offerings follow suit.

There is a small model, typically a mode of transport,  along with a minifigure.  The Minifigure may or may not be exclusive, or reconstructable from existing elements. We are introduced to the character and build the model.  We are then given an explanation as to how to use the book.  After an introduction to the AFOL who designed the models used in the book, we are given some advice regarding a classification for sorting our elements.  Then we are offered some advice about how to approach building in general: look to reference pictures for inspiration, don’t worry if your model doesn’t finish the way that you started: building is the important aspect, and try to build a model that is stable, and likely to stand up to a bit of play.

No instructions are included for models illustrated, as there is no way of predicting the elements you may happen to have at your disposal.  However, complicated mechanisms or unclear details of the build may have further explanation provided.

The book introduces us to Robin Underwood, the chief inventor for the NEXO Knights, who is still studying at the Knights’ Academy.  With this book, we also build a battle suit, which fills the gap left in the Battle Suit NEXO Knight’s sets released earlier in the year. Unlike the others however, Robin does not have a ‘Nexogon’ Shield.

And Then The Story Really Starts

Robin must reboot the Knighton Central Computer Server, after it is sabotaged by Jestro and Monstrous.  Amongst other things, this system grants the knights their NEXO powers.  Heading out with the other knights, he must complete his quest, visiting secondary servers hidden throughout the kingdom.  The team travel through villages, the Dark Forest, cross rivers, and visit the homes of the different knights.  There are many different buildings, and ideas for the reader to build their own version of.  As well as the environments, and rock monsters, there are lots of different forms of transport to build your own version of.

I found myself rather taken by a couple of the models shown in the book.  Now, my personal collection of NEXO Knights specific elements is a bit limited – limited to some of the ultimate figures, and one of the small flying craft (Aaron Fox’s Aero-Striker V2 70320) However, that gave me a good starting point for a couple of the models in the book.  As I couldn’t match pieces perfectly,either in quantity or colour, I had to improvise.

Being short of undecorated shields, I modified the design for Aaron’s Hover-Scooter in the book to allow for my own collection of pieces. It’s functional, and Aaron seems to be enjoying himself!

One of my favorite settings in the story  would be a tree house, concealing a computer server in it’s trunk.  I missed out on the Forestmen, back in the day, but this model had me thinking about such settings. 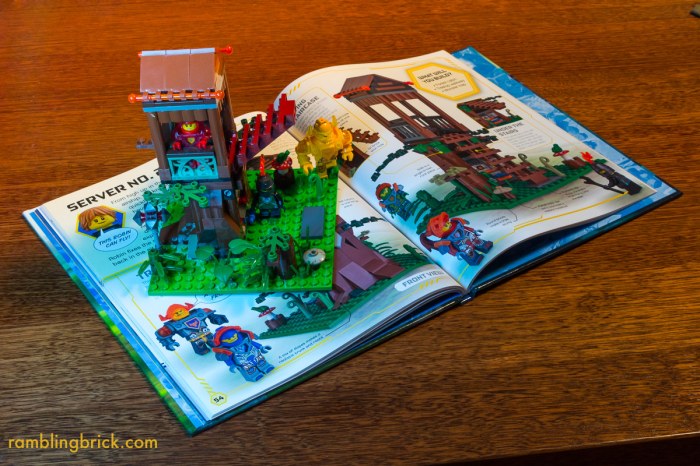 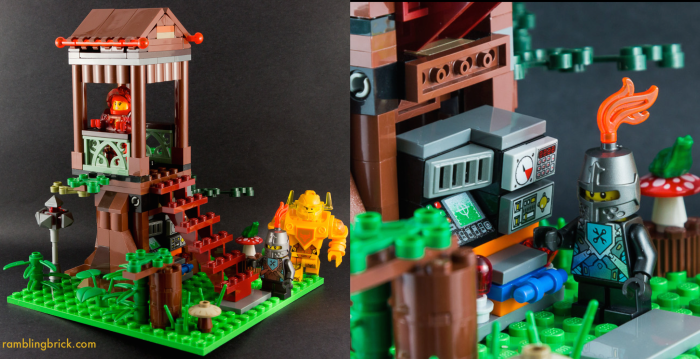 Because of the nature of the NEXO Knights World: with the hi-tech and castle elements combined, there are ideas for any Castle, Space or even City fan inside its pages. There are also ‘What would you build?’ boxes, which provide inspiration for other building projects.

While not employing complicated building techniques, the book provides plenty of inspiration. There are nifty building tips included, including some basic SNOT techniques involving bricks with studs on the sides, as well as an introduction to greebling techniques ( without referring to them as such)

The book is well laid out, in a style consistent with other BYOA books. All characters are equally involved in the story, so you can relate to the building ideas, even if you do not own all mini figures resembling each of the main characters. No instructions are provided, as the author has no expectations as to the nature of your LEGO brick collection.

The story is simple and engaging, and I wanted to take time to get involved in some building, knowing I would curse it shortly, as I am still attempting to sort my collection!

The Battle Suit is relatively simple compared with some of the others that have been built, but it provides all of the basics, as well as a fantastic printed, round 2×2 tile. I appreciate the hammer on one shoulder, and the spanner on the other. The minifigure of Robin Underwood is not, strictly speaking, unique.  All of the elements included have been previously available.  He most closely resembles Robin’s incarnation in 70326: The Black Knight Mech, but without the additional torso armour.

I enjoyed the build, as well as the story. The battle suit fits the scale of the other Battle suits.  It is not as adorned as those of the Knights, but has potential to be enhanced in almost any way you wish!

The style reminds me of the Classic 6000 Ideas Book, which took us on a fantastical journey with Bill and Mary back in the early days of minifigures: the story traverses a number of building styles and story elements.   A diverse collection of elements will allow you to construct a variation on many of the models, however if you have a good supply of NEXO Elements it will help. Especially when constructing living rocks!

The book has 80 pages; coincidently 80 pieces and dozens of great ideas.  This is a great way to complete your collection of Battle Suits, and to launch building ideas.  While the inspirational models shown in the book traverse a wide range of thematic material, I suspect it will be the NEXO Fans that really embrace this particular book.

Some hard to get elements, or even a smattering of ‘Classic Nexo Knight’ Elements may have been useful – for example the 1×1 square pyramid in flurescent orange and dark blue, as well as a few other elements in those colors, which may be in short supply.  Given Robin’s role as an engineer and inventor, I can understand why he was not given a ‘Nexogon’ shield, and this element is widely available in the polybags containing collectable NEXO Knight shields.

The story was engaging for the target market, and the clarity of photographs in the book offers clear ideas as far as building inspiration.  I give the book three point five Arbitrary Praise Units out of Five. It will be available from 21 August through major book retailers, and I am sure you can pre order it now.

I would like to thank Penguin Random House for providing the book for review. Opinions expressed here are all my own. Australian release is 28th August with RRP of $AUD39.99. It is available for preorder, and links to Australian retailers can be found here.

What do you think? Do you seek inspiration from books like this, or find yourself returning to 6000 from time to time? Do you hunt them down for the build, or the minifigure?  Why not leave a comment below, and follow the blog for new reviews, opinion and ideas.

4 thoughts on “Seeking Inspiration With ‘NEXO Knights: Build Your Own Adventure’ [Review]”