At last it has happened: I have pulled apart my Microlight Helicopter 42057 , torn down the Telehandler 42061, and dismantled the BMW Motorrad Concept Hoverbike, the B-model of 42063 .  I then sorted their component parts, in to compartmentalised boxes.

With Extreme Prejudice.  Lots of compartmentalised containers: connectors in one; beams in another; gears and axels and panels. And random, hard to define, parts all in one flat box. I could have probably worked with several more compartments, or indeed boxes, but the process seems to have worked.

So. Many. Elements. Between these sets, we end up with around 1060 pieces, give or take.  Of these, approximately 570 are used in this model. This is the first time I found myself with so many technic pieces in one place.  This was not helped by incorporating the other technic elements which had made their way into the house over the last few years. I was amazed at how few of these pieces were ‘gears’: I’m sure the the gears what I remembered being the big thing that distinguished those early technical sets from LEGOLand and universal building kits.

This is the first time that I have built from instructions for a set I don’t own, with parts so immaculately sorted. It was a strange feeling. Knowing that all the parts were there, having built the original models, and pulling them apart directly into the sorting box was  anathema to my normal building style.

Some suggest that I use this blog as a distraction technique to put off sorting my LEGO® building room.  Some suggest that the state of my LEGO® space is actively set up as a trap – waiting to cause someone to cry out in pain as they step on a brick.  Here at Rambling Brick HQ, I have learned to step on LEGO® bricks in bare feet as part of the creative building process. Not because I want to,  but because I have had to.

So suffice to say, this build went a little smoother, with 570 pieces, using a building system thatI am still trying to come to grips with, compared to the previous weeks reconstruction of the 40525 Volkswagen Beetle. 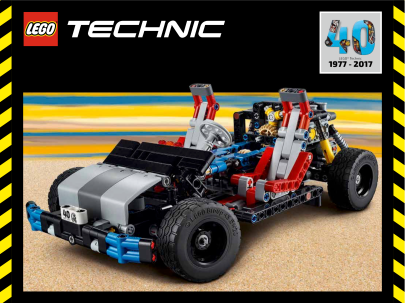 Let us quickly cover the elephant in the room.  While technical sets/Technic celebrates its 40th anniversary this year, 8860.  That set was not released until 1980.  It is however, considered to be THE big technical set of the era, and was featured in the catalog for around eight years. The instructions are available as a download from LEGO.com…

and you can find them here.  I am fond of the yellow and black ‘hazard markings’ around the edge of many pages.  This is a fantastic throwback to ‘the olden days’ where the manuals were frequently edged with such design.  I build with the instructions displayed on my tablet, rather than print out the 138 pages directly.

The build started with the engine block, finally putting the four cylinder heads into the one place, and moved forward, putting together the transmission and then the rest of the chassis.  The suspension rapidly took form and the steering.  Some of the mechanisms came together a little differently in a functional fashion compared to the original 8860 – but more on that later. I do not feel qualified to comment on whether of not there are any particularly ingenious build techniques in this model.  It doesn’t seem to offer me things I have not seen in the base models previously – with the exception of the gear box. 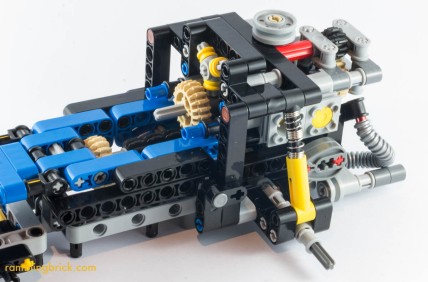 I am coming to terms with the more cubic geometry of Technic, which allows for conceptual simplicity as you move into three dimensions.  Making the studless beams/liftarms square in profile, rather than the standard 2:5 ratio of the 1xn brick, back in the mists of time, allows more time to be spent designing your mechanism rather than wrangling the inconsistent geometry.  Of course, it makes sense as a design concept, if only because gear wheels tend to be circular: an even distance in measuring units from centre to edge, whether you are looking horizontally or vertically, or even some compromise in between.  Some of the techniques I have seen for locking elements into place – constructing a subassembly in one direction, and then rotating it to snap it into place – still make me raise my eyebrows and say ‘Hey, that was neat!’  This habit is starting to annoy my family.

The 40th Anniversary beams are a highlight, an appear in multiple locations: front bumper, rear bumper and under the base of the chassis. 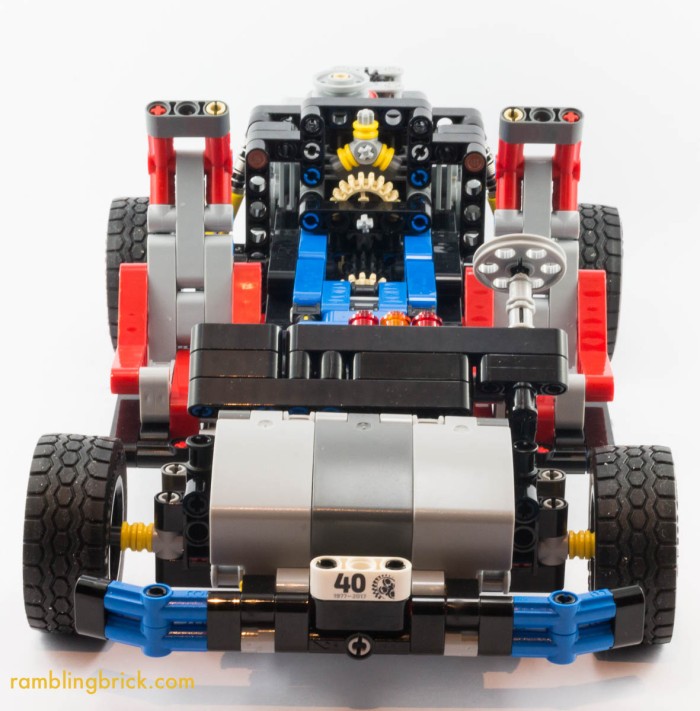 How does this compare with the original 8860? That original set, the most desirable set for Christmas 1980, had 668 parts.  It featured a flat four cylinder engine, a two speed gearbox, reclining seats, rack and pinion steering and a differential gear at the rear axle. The original 8860 holds a special place in my heart: it was the last big set I received before I entered my Dark Ages, but it received a lot of love, rebuilt and dismantled several times.  The remaining pieces currently remain with my parents, where some of them are in the form of the 852 Helicopter.  It would be wrong for me to not pull them apart again when I am next there!

This model maintains the shape an colour scheme of the original, but is scaled down considerably.  It measures 20 studs wide, and 36 long, compared with around 28 studs wide and 50 studs long. The original measurements are based on the original instructions, and may be out by one or 2 studs in either direction due to issues with isometric projection.

The features on this model,

are not quite functioning at the same level: the engine and gear box is there, as is the rear wheel suspension. The chassis is not as heave as the original 8860, and as such doesn’t weigh down on it at rest.  The steering is no longer rack and pinion, however the push-pull system works well.  The gearbox offers the same neutral – first – second gears of the original.  I am a little disappointed that the seats do not recline as the originals, and that their sliding back and forward is not mechanistic in nature, but relies on manual force to slide them along their rails.

The big thing that I found detracted from the play value of this model is the lack of a differential.  I never knew what a differential was until I built 8860: up until then, I had never heard of them. This was probably there first car that I have put together where the need for a differential was necessary. “But wait a minute,” I hear you cry,”I came to your blog for the video game reviews, building techniques and random reviews.  I know nothing of these differentials of which you speak”  So here is a quick explanation: when a car turns a corner, the inside wheel travels a shorter distance compared to the outside wheel. For example, in the new, reimagined chassis, the minimum turning circle has a diameter of 450 mm at the centre of the inside tyres, and 710mm at the centre of the outside tyres. So the inner wheels travel 1414mm during one tight circle, and the outer wheels travel 2231mm, whilst going around the same circle.  As the  whole car travels around the circle in the same period of time, the inner and outer wheels travel at different speeds.  As you might imagine, if both wheels are connected to the same axle, there can be significant stress put on the axle 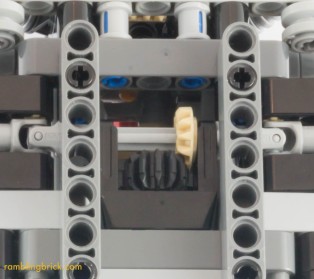 in this situation.  Ultimately the axle will break.
The differential allows both wheels to be connected to the drive shaft, but also allows them to move at different speeds of rotation, as in the tight cornering example shown.  This stress is apparent in this model, especially if you aim to play with it. Unfortunately, the space where a differential would fit in the chassis is not wide enough to reality allow the fitting of the standard LEGO Technic Differential.

This has been a bit of a journey for me: a reminder of how Technic has evolved over the last 40 years, and especially the last 35, since I entered my Dark Ages. I have revisited my first technical set, 852, and put together a small, contemporary helicopter set; explored the mechanisms in the telehandler and developed an understanding as to why motorcycles have been on high rotation through the technic catalog.  The building techniques, and even the planning of technic models, is quite different to standard system construction.  The dimensions of the beams, and therefore the intrinsic geometry offers a different way of thinking about the construction techniques, as well as the presence of different elements as well as the mechanical functions.  This has not been my first experience with Technic mechanisms since I returned to LEGO: a number of the Creator Sets have that honour, however this has been an enlightening experience.  I feel a little more confident with the idea of incorporating these elements into my MOCs, and will probably look at some new ways to introduce movement into my models.

The build experience with the re-imagined 8860 chassis was interesting, like a mystery, watching to see how each mechanism would develop, and compare with what I remembered from the original.  While not quite as large or complex as the original, it had much to demonstrate to the novice technic builder.

For the sake of completeness, I give the car chassis 4 Arbitrary praise units: it is fun to roll, has a functioning gear box as well as steering and moving pistons.  The lack of a rear wheel differential does make turning a corner feel a little harder than it should: I will probably disconnect the rear wheels from each to allow smoother cornering.  This will, however render the vehicle functionally a one wheel drive.

Will I return to university and study mechanical engineering as a direct result of this experience? No: in part because I love what I do otherwise.  But I shall probably look at incorporating more mechanisms into my MOC’s, and have a greater appreciation of what technic builders are achieving.