Skip to content
Home[Press Release] 75144: Star Wars UCS Snowspeeder to be released on May the Fourth…

Slightly earlier (April 29/4 )for VIPs.  Its not the UCS some were looking for, but it’s coming soon.  This morning (Australian Time), the LEGO Group has announced the forthcoming release of the 75144: Snowspeeder on May the Fourth 2017.  Early Access will be available for VIP Customers. 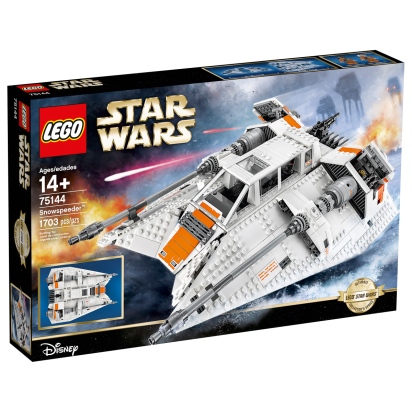 While this has been rumoured for a while, there had been recent optimistic speculation regarding the  possible re-release of 10179: UCS Millennium Falcon (or something quite like similar).  This year is the 40th Anniversary of Star Wars’ premiere.   In October, we will celebrate 10 years since  10179: Millennium Falcon and 10143: Death Star 2 were both released.  These sets were released at a similar time to 10182 Cafe Corner, and from then on it was apparent that LEGO® Sets designed primarily for adults were going to be part of the regular offerings in the annual calendar. There will also be a new Star Wars movie released towards the end of the year…. perhaps we can only hope… (Please note… at this point, this previous statement remains one of rampant speculation).

The new set features two minifigures,  representing Zev Seneska and his unnamed gunner.  This is the first time Zev has been featured in a real minifigure since 2009 when he appeared in 8083 Rebel Trooper Battle Pack and 8089 Hoth Wampa Cave in 2010.

In this new set, both figures feature new, exclusive,  printing on the side of their arms, and Zev has a new helmet design, previously featured in the LEGO Star Wars: The Force Awakens Video Game.

The set features a new printed computer console, and there are many details enhanced through the use of a sticker sheet with thirty one stickers.  Now, while I am not a great fan of stickers, I seriously consider applying them for any set which is likely to be on display for a significant period of time.  They certainly add to the level of detail, however it would have been nicer to not need to place stickers at all.  But placing of stickers then leads to LEGO® pieces, in part, losing their intrinsic reusability! That said, there are some fantastic details that can be added here, especially to the cockpit.

This is a vast improvement on the Ultimate Collector Release from last year, although I do wonder if the Curse of ‘Attack on Hoth’ may leave a bad taste in the mouth of some people, especially when it comes to any vehicle from the first half hour of The Empire Strikes Back.  The Designer Video can be found here.

Collect a true Star Wars classic: the T-47 Snowspeeder. This LEGO® interpretation of the iconic airspeeder that fans will remember from Star Wars: Episode V The Empire Strikes Back has all the details you’d expect, including opening airbrakes, rotating rear gun, and an opening cockpit with space for the included Rebel Snowspeeder Pilot and Rebel Snowspeeder Gunner minifigures. This model also comes with a display stand and fact plaque, so it can take pride of place in any LEGO Star Wars collection.

Available for sale directly through LEGO® beginning May 4, 2017 via shop.LEGO.com and LEGO® Stores.

Australian pricing is not yet available.

What do you think of this set?  Will you sit back and wait for the next UCS, hoping against hope that it will be the Millennium Falcon Reissue. Or is is an easy decision: