Skip to content
HomeGet a Grip: Enter the Goblins…Can They Hold Their Own?

After a year exploring the relationships between the Elves and Dragons, 2017 sees the arrival of Emily Jones’s cousin Sophie.  Sophie is captured by the Goblins, and for further details, I suspect we will need to watch the Netflix LEGO® Elves Series. I have found the design of the minidolls has grown on me, over the years, and I don’t mind having them around the house. 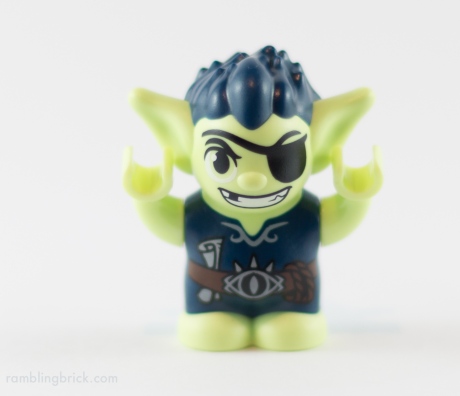 The first half year sets feature seven different goblins.  I picked up a copy of 41184 Aira’s Airship and the Amulet Chase.  This set features Dukelin: A fierce looking, one eyed, spring yellowish green character, with navy blue hair and a similar coloured onesie.  The rest of the set is brimming with possibilities, so while I wait for them to come to fruition, I thought I would bring a short examination of the Goblin figure.

The Goblins are folded from a single, dual colour piece piece of ABS, with the exception of the arms.  The Hair and costume are both the same color (Int this case earth blue). There is a 1.5mm hole in the back of the head, similar to those that accept the Friends hair accessories, feathers and the like.  The torso has some great printing on the front, but none on the back or sides.

The faces have some interesting, cartoonish detail. The heads do not turn.  The arms are unable to rotate a full 360 degrees, because they bump into the ears. The arms are thicker than the minidoll arms, but share their fixed wrists.

The figure is just over three bricks tall, but less than three bricks and a plate tall.  They fit within a four stud space from side to side, and between two and three studs deep.

I’d like to also comment on how the detail in the Elves minidoll’s printing seems to bump up a level every year. Aira’s detail is fantastic, and she carries (for reasons unclear to me at present) a medium lavender boomerang…  This years minidolls feature new torso prints as well as tattoos printed on their face and arms.

It’s not all fun and games with the goblin figures however: Both the Goblin and Elves figures can grip a standard 3.18mm bar in their hands,  and have fixed wrists.
Examining the ‘hands’ closer reveals a subtle difference.  While the upper aspect of the Minidoll hands is able to fit into an antistud/tube easily, there is not enough of the Goblin’s hand free above or below the arm to allow a plate to fit on securely.  The single 1×1 round tile can be made to fit, but it is quite difficult, and is not held as securely on the Goblin’s hand as it is on the Minidoll’s.  However, I do not think, that this will detract from the playability of the Goblins by their target audience.

Lance Takes One for the Team

Since publication, a couple of things have come to my attention.  Thanks to Scott B. for pointing out that the Goblin arm is in fact the same arm seen on the NEXO Knight Scurriers from 2016, and also Sir Jeremy Boob PhD from the Yellow Submarine set.  It is ambidextrous.

Gavin C also asked if the arms are interchangeable with mini figures.  Lance volunteered here to step up to the plate: As you can see, the Goblin arm is shorter. While a minifigure’s arm is able to plug into the socket of a Goblin, it is unable to smoothly rotate past the  Goblin’s foot.

Dukelin himself looks suitably sinister, with his smile missing a tooth, as well as his eyepatch.  I wonder what is on the piece of paper tucked into his belt?  I look forward to finding out as the story unfolds. I am looking forward to putting these sets together over the next few months.

What do you think of the new Goblin figures? Despite Dukelin’s sinister looks, I think the majority of the Goblins come across as mischief makers, rather than intrinsically malevolent.  This is borne out in the 2017 update to the Elves Mobile App.  Adding an additional ‘race’ to the Elves realm, opens the story telling possibilities right up.

3 thoughts on “Get a Grip: Enter the Goblins…Can They Hold Their Own?”