Skip to content
HomeHarry Potter and the Order of the Figures

Harry Potter Minifigures are out in the wild. Once again, new legs are released in the Harry Potter theme.  Here are some scattered thoughts and pictures.

When I first heard about the Harry Potter Collectable Minifigures, I was not feeling too excited. We had already been delivered the second series of The LEGO Batman Movie collectable minifigures, as well as the brilliant series 18 – celebrating the 40th anniversary of the arrival of the LEGO Minigfigure. I really loved that set, but my taste for it was somewhat soured by the presence of the chase figure: the Policeman.  While I loved the idea of this reimagining of the 1978 classic ( I mean, there were no stickers!), the presence of only one figure in a box pushed up the price on the secondary market. The fact that the ‘chase’ figure could be found in the same place in every box meant they were rapidly identifiable by enthusiastic collectors, and people looking to flip them on the secondary market.

Now the inclusion of chase figures in collectable minifigures is not new – There was Mister Gold, back in series 10: but that was SO rare that most people considered it a special surprise, rather than an integral part of the set.  Having a rare figure in every box makes it feel like a necessary part of the set. Especially when the package insert lists it as an integral part of the set. So I let the Policeman pass.  I purchased an ‘incomplete set’, and occasionally had a look at the well rummaged boxes that I came across on random. Around two months after its release, a friend gave me a call as asked if I was still interested? He had come across a couple of extra policemen in his travels, and we organised a simple trade.

And now we have the 71022 Harry Potter Collectable Minifigures Series.  With twenty two figures, it is the largest collection of minifigures to date. Early rumours suggested that there would be twenty four characters, and this is indeed the case, as we discover that two figures in fact have dual identities.  We have sixteen figures related to the Harry Potter Series, some represented for the first time; and six from Fantastic Beasts and Where to Find them. 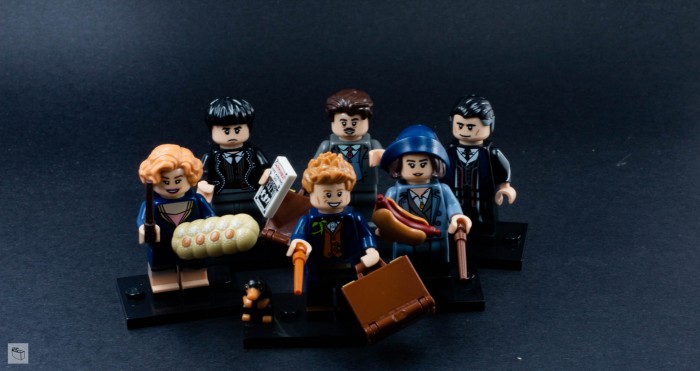 There are also a number of special features introduced in this series:

As we have already considered this year,  we are now celebrating the fortieth anniversary of the arrival of LEGO Minifigures. In this series, we see the continuing development of minifigures with the arrival of a brand new minifigure element: the mid-height legs. One plate shorter than the standard minifigure legs, these are perfect for ‘not quite adult teens’, they are seen with seven of the twenty two figures present.  Initially I was concerned that these elements were isolated to a licensed, collectable minifigure series. However, this is not the first time that Harry Potter has been used to introduce new minifigure leg elements…The mini leg (design ID 41879), frequently used for children, Ewoks, Yoda and dwarves, was first introduced in 2002, as part of Gringotts Bank 4714, and Dobby’s release 4731, in tan, black and brown. These legs also featured in Star Wars, and train sets in the first year. Now, they are everywhere.

It is a shame that four of the seven figures that use the mid length legs have the markings associated with the gowns and uniform of Gryffindor students, and have limited reuse potential.  Fortunately, three figures have plain leg markings: Cho Chan and Neville Longbottom both have black legs, while Luna Lovegood has blue legs.

Here are the legs of all sizes in action: 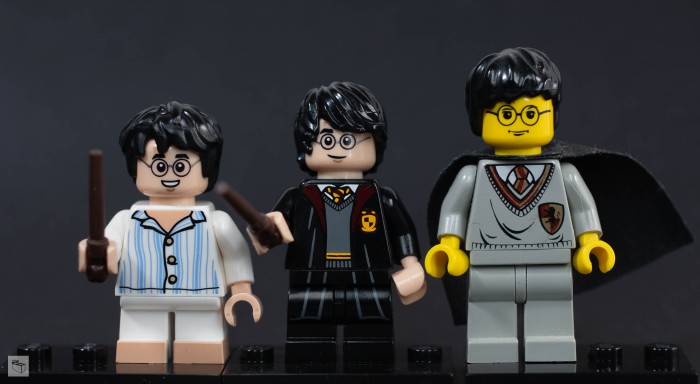 The other change that we have seen this year in in the use of the a new 2x2x1 2/3  curved slope (Miniskirt No.6 39139) : In this series of minifigures, we have three different colours and prints of the new part. It has also recently arrived in the Star Wars theme, worn by the Pretorian guards in 75216  Snoke’s Throne Room (Another August 2018 release). This element now means that figures wearing gowns or dresses are the same height as regular minifigures. Of interest, it is slightly tapered across the studs, and is slightly narrower than the bottom of the minifigure torso.  This has been the case with legs for years, but a point of difference with skirt wearing minifigures”

Otherwise, what does the series have to offer?

So Much Pottery Goodness! Let’s cut to the chase and look at the Figures. 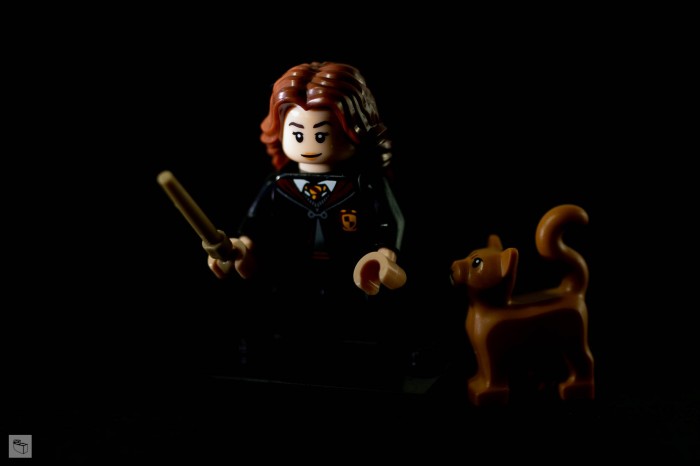 Ron Weasley and the Treacherous Rat 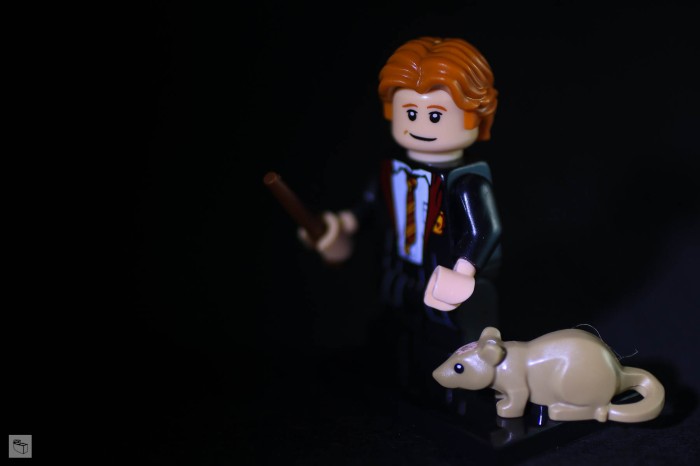 Draco Malfoy and the Golden Snitch 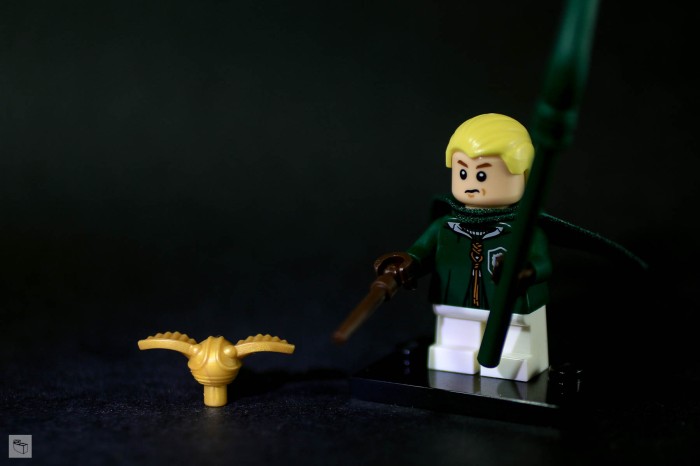 Neville Longbottom and the Screaming Mandragora 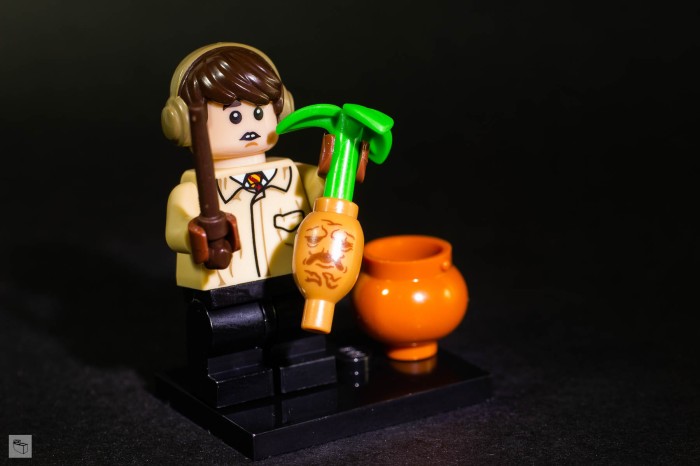 Cho Chang and the Owl with No Name

Dean Thomas and the Flag of Gryffindor

Nagini and He Who Must Not Be Named 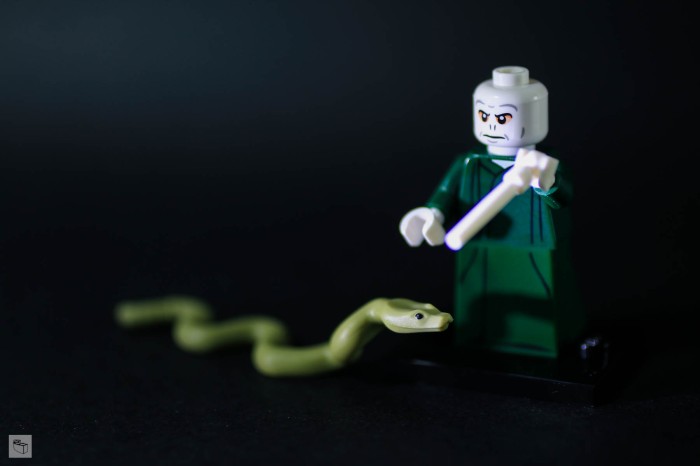 Dobby and the Sock of Freedom

Professor Trelawny and the Teacup of Divination

Cedric Diggory and the Triwizard Cup

Professor Flitwick and the Megaphone of Instruction

Harry Potter and the Cloak of Invisibility

Albus Dumbledore and the Magical Pensieve

Newt Scamander and Case of the Pilfering Niffler 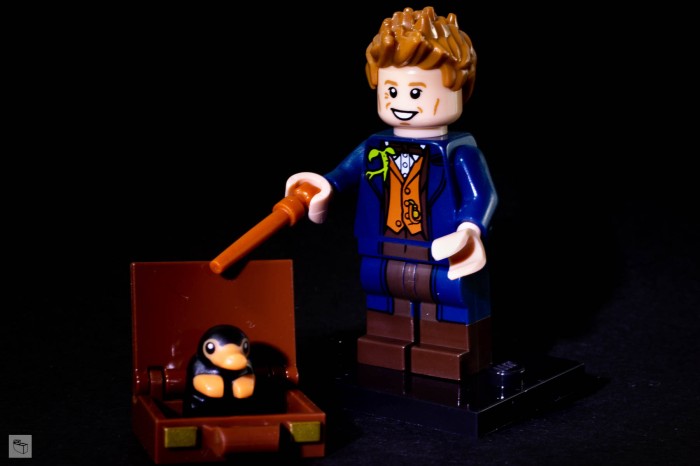 Tina Goldstein and the Hot Dog of Satiety 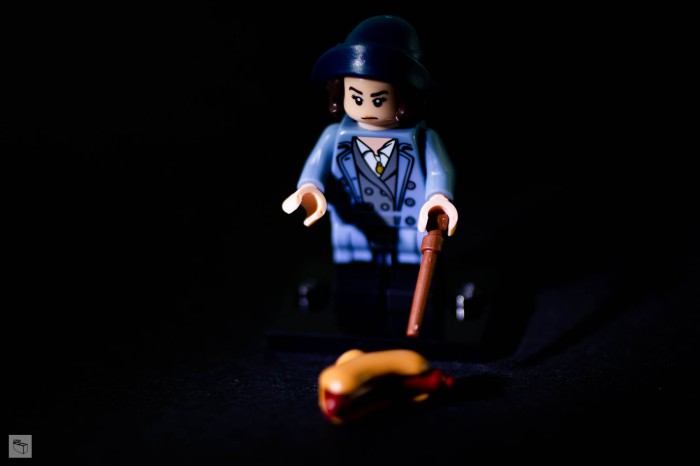 Jacob Kowalski and the Pastries of Hope

Queenie Goldstein and the Strudel of Friendship

Credence Barebone and the Pamphlet of Truth

Percival Graves and the Chase for Grindelwald 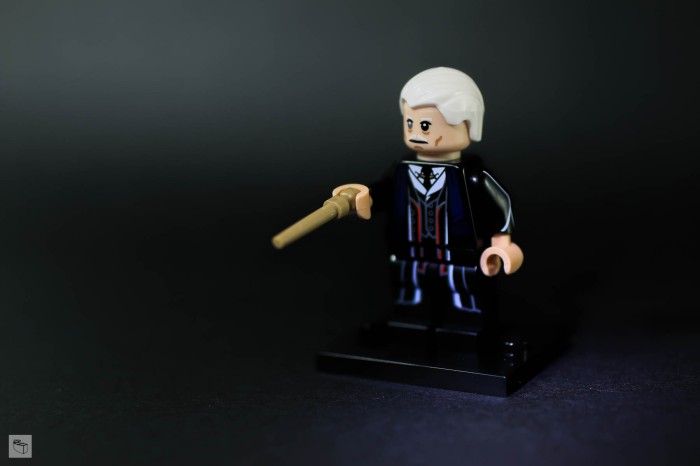 As I look over all of these fantastic figures, I find myself asking the question “Why is Voldemort, the only character depicted without a nose in the movies, the only figure with nostrils printed on his head?”

With only one figure per box, and two characters incorporated in that figure, Percival Graves/ Gellert Grindelwald will be the greatest challenge for serious collectors.  You can find two series of the Harry Potter specific figures in every box, but the Fantastic Beasts figures are harder too complete.

How are you approaching this series? Buying a box? Camping out at a stockist, waiting for a new box? picking up what you happen to find? or exploring the secondary market? Why not share your approach in the comments below.

Don’t forget our Ant-Man Building competition, now on: I’m looking forward to seeing your entries. Until next time…

3 thoughts on “Harry Potter and the Order of the Figures”