Skip to content
HomeWomen of NASA: unsung heroes of one generation, inspiration for the next!

The Announcement last year that the Women of NASA ideas submission from Maia Weinstock was to be developed into a set seemed to be greeted with a combination of excitement and disappointment, from different parties. There were complaints of it just being a collection of minifigures,  only appealing to girls, not having as many elements as a UCS Millennium Falcon and being yet another NASA related Ideas set! But it is so much more than that.

Certainly with only 231 elements, it is the second smallest Ideas set to hit the market, next to the 21110 Research Institute, which was released in 2014. After the Old fishing store, however, I don’t need to have another set with a high piece count on display.

The set features several women who are notable in their contribution to the US space program in varied ways: I will discuss each of them in turn with their vignette.

This set was released on November 1st, and took a few weeks to make its way from Denmark to Melbourne. The box, like many of the Ideas  sets is robust, and designed to be kept. It is a similar design to many of the other ideas sets, as well as the boxes for the Architecture series.

The instruction manual provides a background on each of the people portrayed in the set, as well as both the fan designer and the set designers from the LEGO Group. 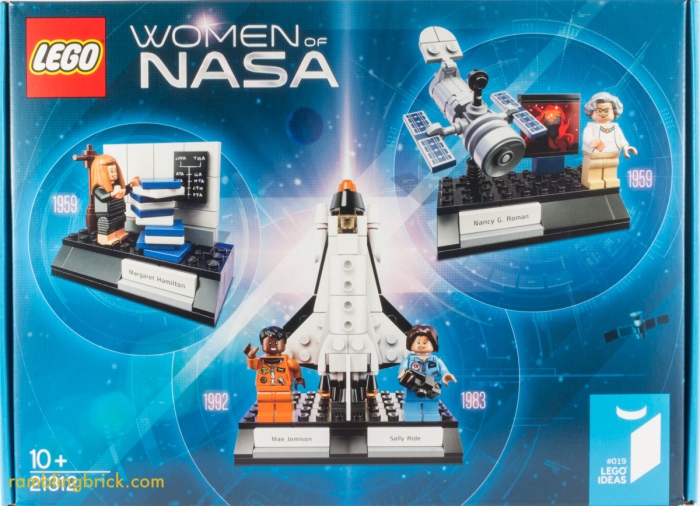 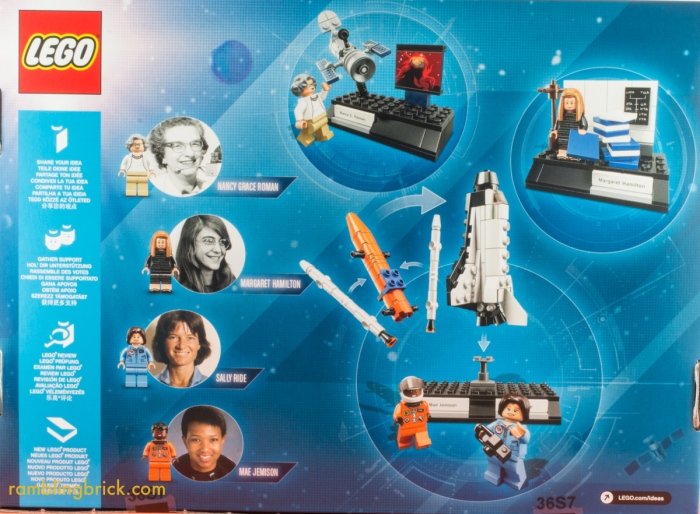 The sets comes with three large, unnumbered polybags, with one containing another smaller bag.  This is a relatively manageable number elements for tabletop construction, and the process was relatively simple.

I set out to identify the elements of interest in this set, particularly those that are new this year.  Interestingly, while Brickset lists the black fez (element ID 6203937) as new for this year, it has appeared in previous years with different element ID (but same design ID).  The stud with bar (6196548) is new this year,appearing in Ninjago City and the Winter Village Railway station. The white ’round plate with 3.2mm shaft’ has appeared in 2 other sets this year. This is also only the second appearance off the 2x2x2 Dustbin(6194308)  in light blueish grey/medium stone grey, which has been previously limited to dark stone grey and green.

The other new elements present this year are printed elements, not yet appearing in the Brickset database:

We have a 4×2 panel, printed with a nebula, although it could just as easily be used as an art installation on the wall of a living room or gallery. There are two, earth blue 1×4 tiles, printed to resemble solar panels.  Finally there is a black 2×3 tile, printed with code, written on  blackboard.

Finally, we have the minifigures: each has double sided facial prints and a unique, double sided torso print.  There is no printing on the arms. The Margaret Hamilton minifigure is the only one to feature printed legs.

The set is rapidly built.  It is not especially sophisticated, however there are a few neat features – I found it interesting that each plinth had a unique mode of construction, each with a similar final look. I have included an image from the original Ideas submission, so you can see how the design evolved once it was handed over to the LEGO Design team.

Nancy Roman: a keen astronomer from an early age, was the first Chief of Astronomy at NASA’s Office of Space Science.  She was actively engaged in the development and planning of the Hubble Space Telescope, ultimately launched in 1990.

Her vignette features a picture of nebula, as well as a microscale model of the Hubble Space telescope, crafted from a collection of interesting elements. 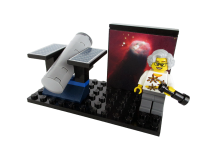 Margaret Hamilton was always interested in mathematics, and was involved in writing software for air defence and weather prediction while at MIT.  She went on to lead the team that put together the inflight navigation software for the Apollo moon landing program.

Her display includes the program listing for Apollo 11, printed out and bound, into to large stack. I appreciate the way that 2×2 offset plates were used here to allow the stacked files to look a little uneven, with just a hint of precariousness. 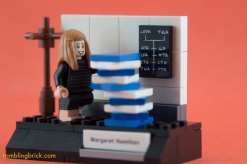 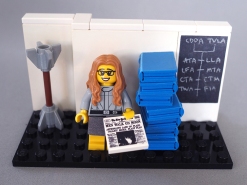 Sally Ride was completing her PhD in physics when she applied to become an astronaut, becoming the first American woman in space in June 1983 on board the Space Shuttle  Challenger. She flew again in 1984.  She left NASA in 1987 and became a physics professor.  She died in 2012.

Mae Jemison began her university studies at age 16, completing her Bachelors degrees in Engineering and African Studies.  She then went on to complete her MD, and spending time working in Africa before becoming the first African American woman to fly in space. In 1992, she flew onboard the Space Shuttle Endeavour carrying out experiments in life sciences, material sciences and medicine. 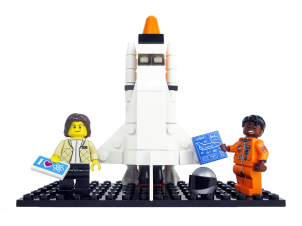 Both of these women are featured in a vignette featuring a micro scale space shuttle. The round plates with bar are used here, and allow the main engines can be slightly splayed.

All in all, construction is not complicated, BUT the final result for the space shuttle is terrific. I love the use of the round plate with bar, for the orbiter’s engines, as well as the shape of the wings.

The LEGO Ideas Women of NASA set 21312 is not a complicated build, but I found it to be inspirational.  Like many people of my vintage, the space program was something that captured my imagination.  At the time, beyond the test pilots and astronauts, there were not many names that entered the public consciousness. This set goes some way to fill the gaps that exist in the standard education at the time, but there are still many unsung heroes of the American Space Program.

LEGO Ideas serves a number of roles: it provides builders with an opportunity to provide set inspiration to LEGO. The Ideas sets often capture the imagination of people outside the traditional LEGO fan community – especially when you look at the pop culture based sets: Back to the future, Ghostbusters, the Beatles and Doctor Who. Space Exploration forms another category of popular Ideas Themes: the Discovery rover (from the Cuusoo program), the Saturn V rocket (still prone to stock shortages- this is a phenomenal build, but occupies more than its fair share of shelf space!) and now the Women of NASA.

The Old Fishing Store, released earlier this year is another gorgeous set, and I can’t wait to start putting it together.

But not all of Ideas sets will appeal to everyone. I would suggest, in fact, that if there is not an outcry every time a successful submission is announced, that the program is not doing its job properly.  Over the last decade the rules have been revised, to reduce the number of ‘best MOC’ submissions that appeared to make their way into Ideas, based on tried and tested intellectual properties.

However, some sets certainly capture the imagination of the non-AFOL public: I have had a number of friends asking me about this set’s availability, in order to plan their Christmas Shopping for a daughter interested in scientific endeavour,

I like this set. The stories that go with the builds are inspirational and this in turn enhanced my experience of it. It is now available through LEGO retail channels, and is unlikely to see a significantly wider release until next year. I do feel that $AUD50 is a bit more than I would normally feel happy to pay for a set of this size(approx 17¢/piece), but it feels like you are getting so much more than a collection of LEGO pieces – and it has been a while since I bought a set that gave me that feeling for less than $100.   I give it four out of five arbitrary praise units – its not all about the size and complexity of the build, its about the journey, and the people who took us there. And the journey into space is a pretty big one!

I’m sure you know someone who would be inspired by this set – young or old, boy or girl! And Christmas is is just around the corner…

One thought on “Women of NASA: unsung heroes of one generation, inspiration for the next!”