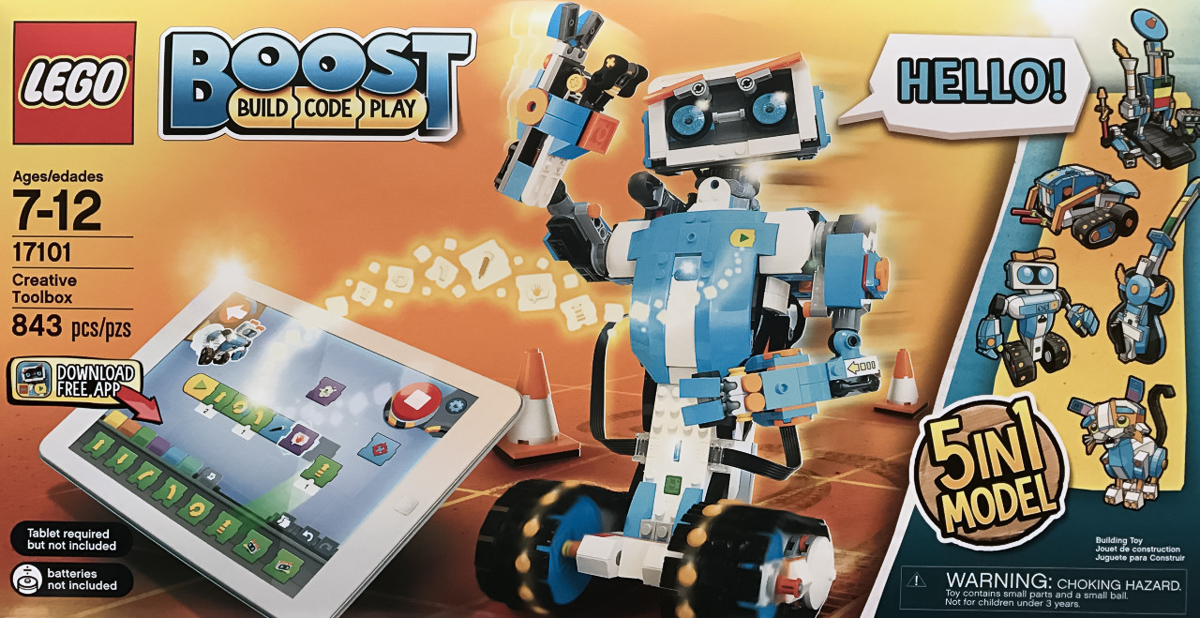 The LEGO® Boost robotics system is now available to order in some markets, with reports of deliveries arriving starting to come in from around the world.  Australia will have to wait a few more months before the new LEGO robots arrive to take over our lives. While the global release is scheduled for August 1st,  the Australian release date has been ever so quietly announced on shop.LEGO.com.   Scheduled for release in Australia, with a limited local retail release (the definition of limited currently remains a little fuzzy) on October 1, 2017, the Recommended Retail Price is expected to be around $AU250. Or half the price of a LEGO Mindstorms EV3.

Based on the a similar hardware platform as the WeDo Educational robotics platform, Boost was announced at CES in Las Vegas back in January 2017. There was a lot of excitement at the time of the announcement, and over recent months the set has been available for preorder in other markets. Until now however, news of the Australian release has best been described as ‘a little quiet.’

Think of Boost as being a robotics system using predominantly System, rather than Technic building elements. This will allow easy incorporation in a child’s own LEGO Creations.  There are four basic models in the Creative Toolkit set (17101): Vernie the Robot; M.T.R. 4 – the Multi Tooled Rover; The Guitar4000, which uses a color sensor to contol the sounds played, the Autobuilder, and Frankie the Cat: who purrs, plays and gets upset if you lift him up by the tail! 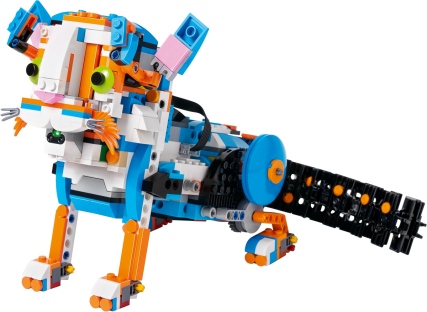 With the bright Azure/orange/white colour scheme, the Boost Creative Toolbox is aimed at being accessible by children aged seven years and older.

I met Frankie the Cat, and his designer, Carl Merriam, at the LEGO Fan Media Days earlier in the year, and will bring you that interview in weeks to come.

The programming interface is via a tablet based app (Android or iOS), which is programmable through a drag and drop interface (similar to the Scratch programming environment). The tablet is also responsible for processing all information coming from and going to the Boost Unit while it runs. Be aware (if you are planning parallel importing prior to the Australian release) that you will need the app in order to use the system. The app is now live in the ITunes Store in Australia

It looks like it will be an exciting product to explore and get to know over the next few years.

Part of the press release from that January follows:

Build the creation you want
LEGO® BOOST combines the endless play opportunities of a traditional LEGO set with an endless variety of movement and sound capabilities made possible through an easy-to-use, app-based coding environment. LEGO BOOST has been developed for children ages 7 and older by an international team of LEGO designers. Using familiar LEGO elements and simple coding language, LEGO BOOST delivers an intuitive approach and opportunities for quick success.

Powered by a Move Hub, a LEGO stud-covered brick with built-in tilt sensor upon which children can add LEGO elements, motors and a sensor that combines color and distance detection, LEGO BOOST brings movement to any LEGO creation. The set includes building instructions for five diverse models; Vernie the Robot, Frankie the Cat, the Guitar 4000, the Multi-Tool Rover 4 (M.T.R.4), and the Autobuilder, each designed to give children the basic building and coding skills needed to express their creativity by personalizing whatever they build.

“We know that children dream of bringing their LEGO creations to life, and our chief ambition for LEGO BOOST is to fulfill that wish. Once children build a LEGO creation, we give them simple coding tools to ‘boost’ their models by adding personality,” said Simon Kent, design lead for the LEGO Group. “We want children to first and foremost have a fun and limitless play experience, adding the coding opportunity is the means to get there.”

Coding brings your creation to life
LEGO® BOOST introduces children to coding through a free downloadable app that contains the guidance, building instructions and simple coding commands to bring to life five LEGO creations, one at a time. Much like building with LEGO bricks, children build behaviors and actions by linking digital coding blocks in an easy-to-understand horizontal layout. To further personify the experience, LEGO BOOST lets children add voice recordings to their creations, adding personality without requiring spelling and typing. The app also includes more than 60 activities designed to inspire additional building, coding and play.
Creative canvas lets you boost any LEGO® creation
To further inspire creative building and coding, the LEGO® BOOST app includes a “creative canvas” that includes basic building instructions for three simple base models that children can use to customize their own LEGO creations. The three bases available at launch include: a walking base for making animals like a dragon or a pony, a driving base for building vehicles like a dune buggy or rover, and an entrance base so that children can make their own castle, fort, or even a futuristic space station. Once children are comfortable with building and coding the various LEGO BOOST models, they can use the kit to “boost” any LEGO creation – from LEGO CITY and LEGO Friends to LEGO NINJAGO and The LEGO BATMAN Movie.
LEGO® BOOST includes:

LEGO BOOST uses 6 AAA batteries. Alkaline batteries are recommended, but rechargeable batteries can be used, though may result in weaker power output.

LEGO BOOST will be available at most stores and online shopping sites where toys are sold, through select consumer electronics retailers, and at LEGO Stores and shop.LEGO.com in the second half of 2017 and will have a suggested retail price of $159.99 USD $159.99 (EUR) and $199.99 (CAD). For more information, visit http://www.LEGO.com/BOOST. 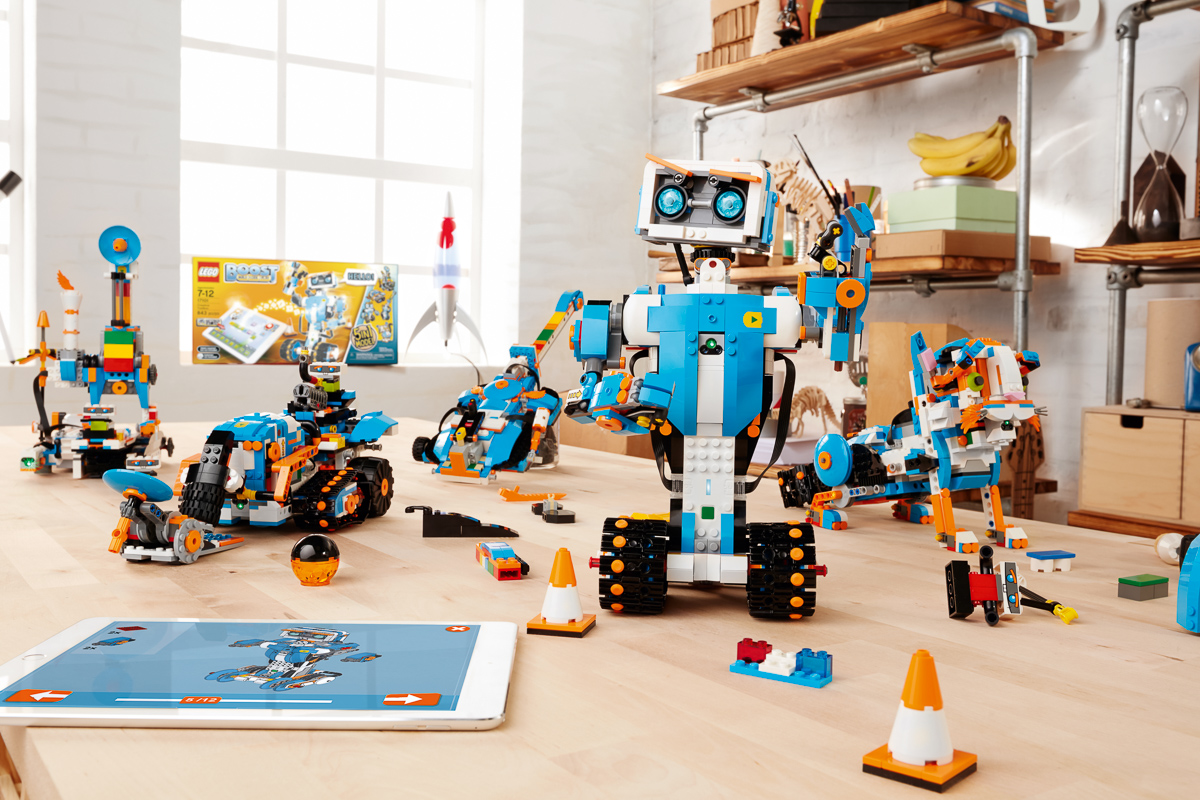 Boost will be available in selected Australian retailers from October 1st 2017, with recommended retail pricing pricing  expected to be around $250. It can be (pre) ordered in the rest of the world now…

What do you think? Is Boost the automation system that you and/or your children have been waiting for? Reviews are starting to surface as some of the early orders have begun to ship – Let me know what you think.  I hope to get my interview with Frankie’s designer, with further details of Boost posted in the next week or two, so come back soon or follow the Rambling Brick on Facebook to be alerted to the update.