In which I build the Saturn V Ideas set, almost lose it in a wind gust, consider the legality of the American flag on the moon and Jamie Berard helps us to establish that plates and tiles are more different than we may have previously considered… 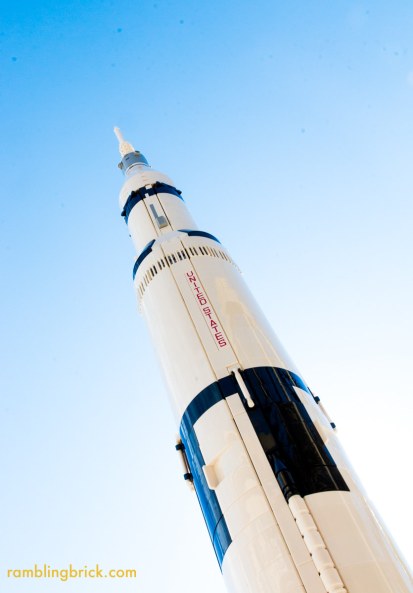 I have just been fortunate to complete one of the most satisfying builds I have attempted in recent years.  The LEGO® Ideas Saturn V Rocket  21309 was released on June 1st, to wide accalaim. The Rambling Brick was fortunate to secure a copy on release day, courtesy of of the LEGO® Community Engagement Team.  Any opinions expressed here are, however, my own. The set has been subject to backorder on shop.lego.com for some time, and production continues to catch up with demand.  This may take some time.

Since completing the model, I have been confronted by a severe weather warning, with the possibility of destructive winds – up to 120 km/h (roughly 70MPH).  This is a shame, as the winter sun has been shining brightly today: just what you need to take stirring, outdoor shots of an amazing model.  On setting the model up outside, it became apparant that there are reasons for spaceflights being delayed due to bad weather.  I managed one or two shots before catching the falling bohemoth, as it attempted to attain equilibrium in its ongoing battle with the forces of nature. That is to say, i caught it before it hit the ground.