The Pick-A-Brick Wall: A Poem

I walked on in, the lights shone bright

The buckets hung on walls of white.
Inside were parts of every type
But was the trip really worth the hype?
I picked up a cup, and scanned the wall.
What should I take, I want it all.
Over one hundred different parts
Just where does one begin to start?

The choice is hard, my brain went wild.
So hard to calm the inner child.
I looked for tiles: that was my dream,
First I found the white ice cream.
Regular bricks: red, pink and blue
I left them be, but what about you?
Left wing, Right Wing in Light Stone Grey.

Some jets complete it: what more to say?

Turntable bases caught my eye
I stacked them up, two hundred high.
How to use them? To decorate
a wall to make my next MOC great.
The garden, too, could stand to gain
Some bamboo and flowers if its all the same.
Clips and bars: grey and yellow
And those small flames, well hello!

So many parts in green of sand:

plates, clips, curved slopes all come to hand.
And telescopes, what about those?
I could use them to make an amusing nose
I stack my cups with bricks so bright:
Yellow and pink, a sherbet fright.
And then trans clear – slopes and bricks
When stacking up became quite thick.

But careful as you scoop parts up,
for if they fail to reach your cup,
Before too long they reach the floor,
and to step on them is sore.
Someone said, I don’t know who,
“It’s best to wear a safety shoe”
Its good advice, from someone kind 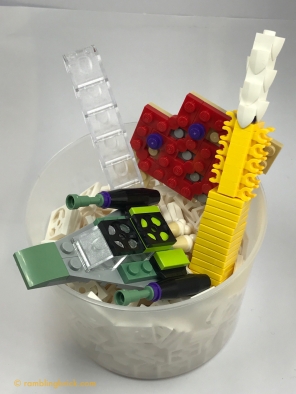 to give an adult piece of mind.

Another plan then sprang to mind,
with another project close behind.
As I filled the cup with different bits,
I knew my wallet would feel the hit
of expenses incurred with each cup,
as I moved along to fill them up.
One Large, One Small – enough today
But in the future: who can say?

The range was good, selection fun,
but I wonder if I jumped the gun?
A better plan to go and shop
for parts but to know just when to stop.
I’ll come again in three months time,
when the pieces change – that will be fine.
An autumn day, sky full of sun
made this LEGO store a bit of fun!

The retail store located at the new LEGOLAND Discovery Centre Melbourne opened its doors this week, ahead of the of the Official Ribbon Cutting Next Week.

If you have seen a LEGO Store before, you probably know what to expect.

If not: there are LEGO sets at retail prices (10% off for annual pass holders), small exclusive sets,  lots of gear and books that you will not normally see conveniently located all in one location.

And a Pick-A-Brick Wall.  I have seen Pick a Brick walls before.  I have even selected bricks from them previously. Even though this one is operated by Merlin, PAB at the LEGOLAND Discovery Centre Melbourne is charged by the cupful ($14.99 small; $29.99 Large), rather than weight (Hooray!) But it’s a little different when you have a little time, in your own city and go to visit it for the first time….it didn’t quite drive me to song.

You do not need a ticket to the Discovery Centre to enter the store.

Except on dedicated AFOL nights, adults must be accompanied by a child.  This is an international policy in LEGOLAND Discovery Centres. It is a play centre, after all…