Celebrating its 40th Anniversary this year, LEGO® Space is one of the great evergreen themes of the Minifigure era. One of the terrific aspects of the theme was the way that the overall design would periodically evolve, introducing new colour schemes and minifigure designs. 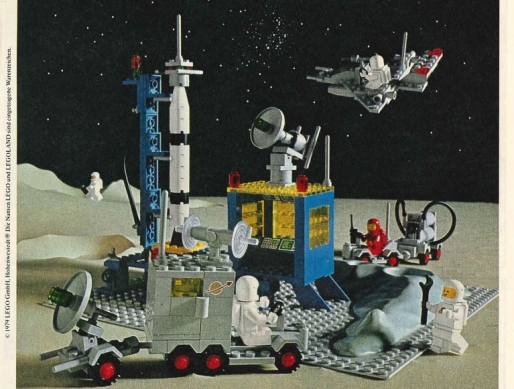 The theme arrived as we saw a resurgence in science fiction and space fantasy entertainment on the screen: led by films such as Star Wars, and on the smaller screen by Doctor Who, Blakes Seven and Battlestar Galactica, our imaginations were primed for journeys beyond the stars. The Space Shuttle Enterprise had been undergoing test flights from the back of a 747 Jet, and a we were excited for a new era of space exploration commencing, with the Space Shuttle Columbia ultimately launching in 1981.

These early series focussed on exploration, mining and the perils of space travel itself. It took 8 years before an enemy faction arrived, providing an outlet for dramatic conflict within the stories that were told.

Join us, as we set about exploring the print advertisements for LEGOLAND Space, and continue through the classic space era. Most of these advertisements are from Europe in a variety of languages.  I have endeavoured to provide translations of these.

END_OF_DOCUMENT_TOKEN_TO_BE_REPLACED

A snap from AFOL day at the @legohouse These #minifigures have been travelling with our family since they were new. They had a few years off to rest, before I came out of my Dark Ages.
Hey kids, have a practice here before you get to the real scanner.
Extra Special Thanks to the Bricknerd team, for awarding me a Nerd of Note at the skaerbaek fan weekend. It was fantastic to meet members of the team at #sfw2022. It has no business sitting on my MOC card, other than to remind 60 year old me when I received it. In the mean time, I’ll keep doing what I do. Many thanks to @areheisel , Eduard, @whitegoatworks and @davechef6 for their support and contact over the last few days. #afollife #ramblingbrick @bricknerdofficial
So this seemed to happen to @jayong28 and I at the Skaerbaek Fan Weekend #sfw2022 #LEGO #afollife #ramblingbrick @tvsyd
Schrödingers MOC after 2 weeks of travelling it is both intact and destroyed, until observed #sfw2022
Crazy cake #zoetrope effect at #legohouse celebrating #90yearsofplay #legocastle #legospace #legotown #duplo #legoland #legofriends