For the last few months, we have been teased with announcements of a forthcoming range of  LEGO® sets based on the video game Overwatch.  Last week, out of the blue, Blizzard, the publisher behind the game, announced immediate availability of the BlizzCon Exclusive ‘Omnic Skin Bastion75987’ set from their Gear Store.

This was a bit unexpected, but offered some interesting opportunities as a retail experience.  The set is available more places than shop.lego.com can supply, and shipping is (by Australian standards) pretty reasonable.

Now, I don’t play Overwatch, but my son, a couple of weeks out from his final school exams has been quite a keen player, and was excited to see this new set. I ordered one shortly after it became available and then proceeded to wait. I did not have to wait long, however.

The set cost $USD25 plus approximately $USD10 for shipping to Melbourne (although adding extra sets only increased the shipping by 1-2 dollars per set – you may wish to purchase in conjunction with a friend or two and split the shipping). Having placed my order on October 12th, the parcel arrived via Federal Express on October 16th.  I don’t think I have ever received LEGO  from overseas quite so quickly.

This is a relatively small set: only one hundred and eighty two elements – this averages out at over 13c/piece.  This is not the most economical set, and there are no unique elements in the set.We do have some unique stickers, including a LEGO/Blizard exclusive logo sticker and stickers for the pauldrons, but this may not do it for some.

Let’s have a quick look at the build:

The front and back of the box demonstrate slightly different aspects of the model: the fronts depicts a woodland setting, similar to that where Bastion was reactivated years after the Omnic Crisis. The back of the box shows a more plain blue and white background, and demonstrated the stud shooter. We have punch out tabs to open the box, but judicious use of a letter opener my avoid significant damage.

The factory code on this set, 37R8 suggests that the set was boxed up in the Mexican factory, in early September (week 37) of 2018.

Inside the box we have three bags of parts, an instruction manual and a single sticker sheet with three stickers…

As a bipedal robot, there is significant use of SNOT techniques in the construction of this mech, and we have a number of elements that facilitate these techniques, including the new 1×1 bracket, both up and down, present in multiple numbers.

Here are some of the relatively new and interesting elements included in this set – I know some of them have been around for a year or two, and some longer. However, they are relatively rare in my parts collection and they contribute significantly to the final form of the set.

The build progresses simply enough: torso, head legs and arms brackets are used to enable a ‘wrap round skin.

Small ball joints are used for the hips and shoulders, and hinge plates in parallel provide a little additional stability at the elbow. Once the arms are complete, there are  (exclusive) stickers to enhance the shoulders. 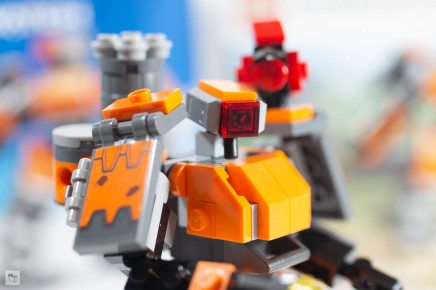 The head is build around element 15071 blaster 2x1x2/3 with studs on top and sides, and handle. While this part has been around since 2014, it has carefully evaded the sets I have set out to purchase over this time.

The legs are a great example of SNOT work, featuring the up and down brackets, as well as the 1×2 plate (round ends). 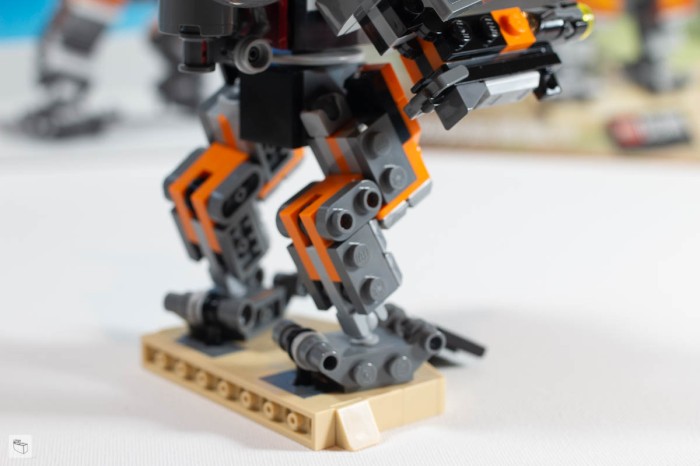 The hips do not let the legs run vertically, relative to the torso: they are very slightly splayed. The ball joints at the ankles mean, however, that the feet can be completely flat on the ground. The stud with handle element used at the back of the foot allows the feet to be attached to the stand, by having the handle insert into a technic ‘axle brick.’ Despite the clever articulation at the hip and ankle, once again we do not have an articulated knee joint.

The Gatling gun which is carried on Bastion’s back consists of a barrel and some cylindrical elements. It is attached using a relatively uncommon dark red shield element.

We finish the build with a stand, including the “Exclusive Blizzard Tile” which is created, unfortunately, with a sticker.

Regular players of the game will be aware that this is not the original colouring of Bastion, but rather than orange and silver, it is a combination of green, tan, orange and gunmetal. The truth is that at present, most of the outer armour elements are not readily available in the colours seen in the original version of Bastion, as seen in the game of Overwatch. Perhaps one of the reasons for depicting him in the Omnic Crisis Skin is that these elements are readily available in orange.

One of the appealing aspects of Bastion as a character is the ability to transform between reconnaissance, sentry and tank modes. Unfortunately, this functionality is not built into the set, but I suspect the alternative builds into these forms can be produced using the elements provided. (Individual results might vary).

This set is a teaser, an early exclusive set which I do not expect will be part of the ongoing LEGO Overwatch series. While the build is interesting, and the resulting model is extremely poseable, and full of character, I find it hard to recommend it as a purchase for anyone but diehard completionists, and Overwatch fans, for whom the exclusive adhesive labels, as well as the box art will make the purchase special. For the LEGO elements themselves, the set is a bit too expensive for my liking, and I find myself concerned that when we finally see the full range of Overwatch sets that they might also be ambitiously priced.

I do like the final result of the model itself, with its pose ability, as well as the microbuild of Ganymede, Bastion’s avian companion. I give the set three out of five arbitrary praise units.

But, is my outrage over price anything justified? Is this really the point of this set? In a recent post on the LEGO AFOL Engagement team’s blog, the prospect of reskinning the model is discussed – and I look forward to seeing how people in the community might respond. Will it be Lost in the Forest Bastion? Classic Space Bastion? Blacktron Bastion? Or (possibly my favorite option) Nexo Bastion?

If people don’t purchase a set, but are inspired to create variations of it using elements in their collection, can it be considered to be anything other than a success.  At this early stage, the instructions have not been released through the LEGO Customer Support website, but it is just a matter of time. If you build a reskinned version of Bastion, why not tag @ramblingbrick on social media: I’d love to see what you make.

What do you think? Is this a Must Have? Something to Bricklink the parts for? Or a model to wave at as it vanished of the shelves, thanks to its exclusive nature. Or, just possibly, it might inspire you to develop the same robot, but with an alternative skin.