Skip to content
HomeRediscovering play with The Joker Batcave Attack 10753

Sometimes, I forget about the importance of Play. And the way that it can be a fun thing to do with your LEGO® Bricks.  I don’t just mean take a couple of bricks and roll them around until they click together in a novel way. I mean, let my imagination kick in, and have stories unfold in front of me, with no idea where they might be going or how they will get there. Some sets set themselves up for rough and tumble storytelling, where kids can assemble them quickly before getting on with all the serious zooming and swooshing that comes with putting a vehicle together. 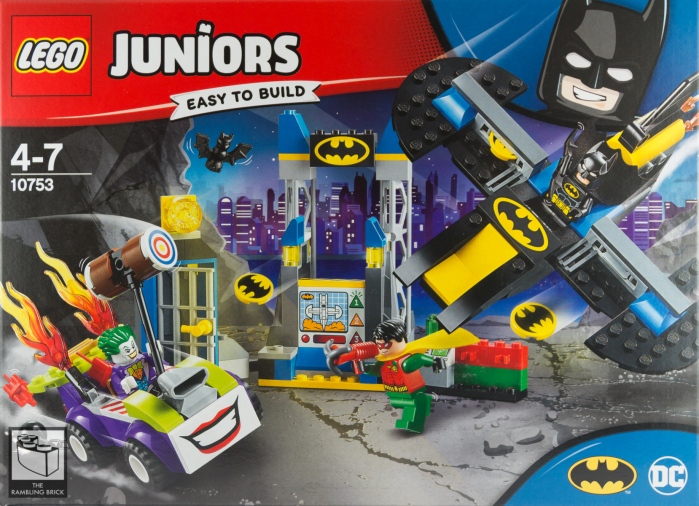 These sets are designed to be easily assembled by young builders, and ready for play.  Even if you are only partway through the final construction. That’s right: the Juniors sets: designed for younger builders, these sets span the LEGO themes, from City, to Ninjago and Friends to Disney Princess and Superheroes. Many of the sets feature larger elements to simplify the construction process. Today, I would like to take a look at the Juniors set 10753 The Joker Batcave Attack.

After looking at the box art and instruction booklet, I realise that today I have returned to an world of instant gratification.  A world where a vehicle can be put together in seconds.  From memory. After only a cursory examination of the box art.  And it’s all in the first bag, along with our hero mini figures.  The second bag contains the second vehicle, and the villain. And the third contains a building.  And there are precisely NO stickers.  That’s right: would a sticker slow down the time it takes to produce a playable toy? Leave it out. Include a printed element instead.

The Joker Batcave attack is the third DC Superheroes Juniors Batcave set, previously featuring a blue and grey ‘classic’ batman and robin, looking as if they were coming straight from Super Friends, in 1972. Then we had the same Batman, with Superman and Lex Luthor. Each of these came with a Batmobile. This year, we have something a little different…

The Joker Batcave Attack comes with  three large unbagged elements, and three bags of parts, each representing a sub build: The Batplane, the Jokermobile and the Batcave. 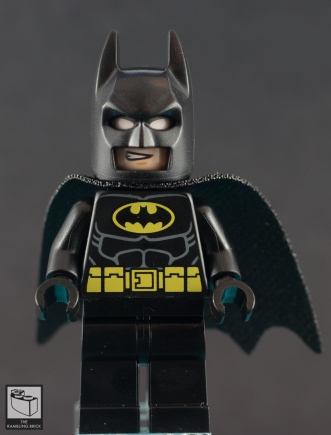 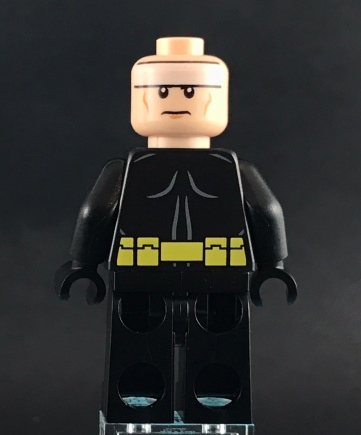 This set includes three mini figures – and two are unique to this set at this time. Mostly.  We have a standard ‘Black’ LEGO Batman, with a printed yellow utility belt, and black Batarangs. We have seen home before, and I suspect we will again in then future. 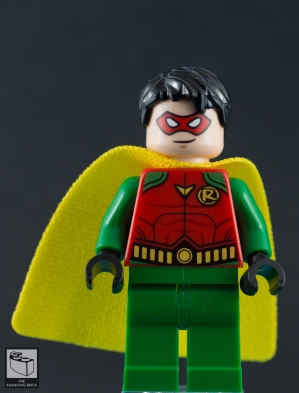 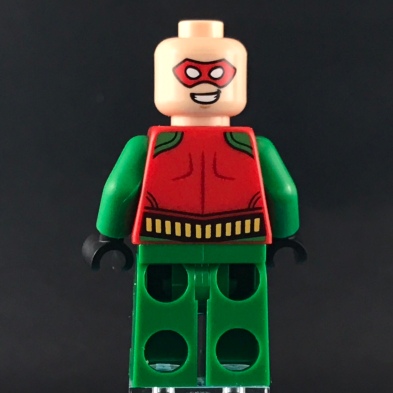 Robin has green legs, a red tunic with green shoulder pads and sleeves, and dark green gloves. He wears a read domino mask.  This is the uniform worn by Robin in the DC New 52 continuity. Accuracy could only be enhanced by using dual mould arms – to show some skin between his sleeves and gauntlets. He also has a red grappling gun. Both black and yellow capes are included, made out of the current spongy material, and no complicated folding required. 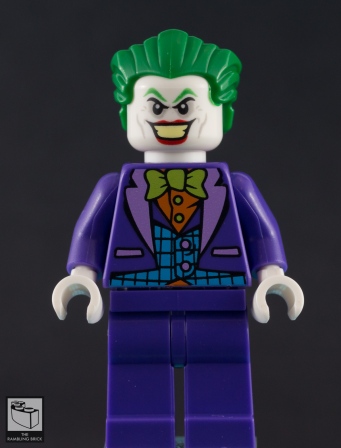 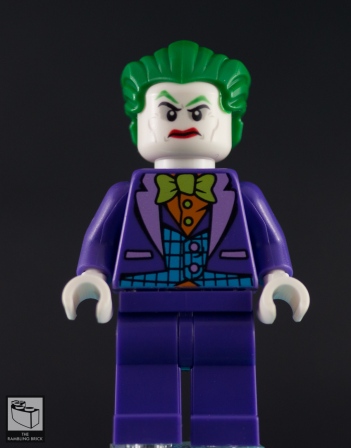 And then we have the Joker.  We have hair, a smile and a torso print we have seen before, but on the flip side of the head we have an impressive, lemon sucking sneer, the like of which is, in the comics, almost always followed by somebody becoming unexpectedly deceased in a most precipitous fashion. 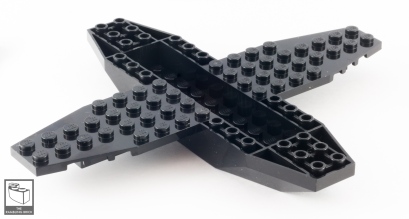 Construction of the first sub-build is simple, and made easier through the use of a large element as the fuselage/wing assembly for the Batwing. The quick attachment of semicircle plates and nose prongs give us the distinctive shape that we have come to expect from the Batwing. A printed tile confirms it as a bat-weapon firing craft, and the tail is easily attached.  The plane comfortably seats one. 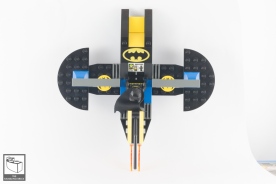 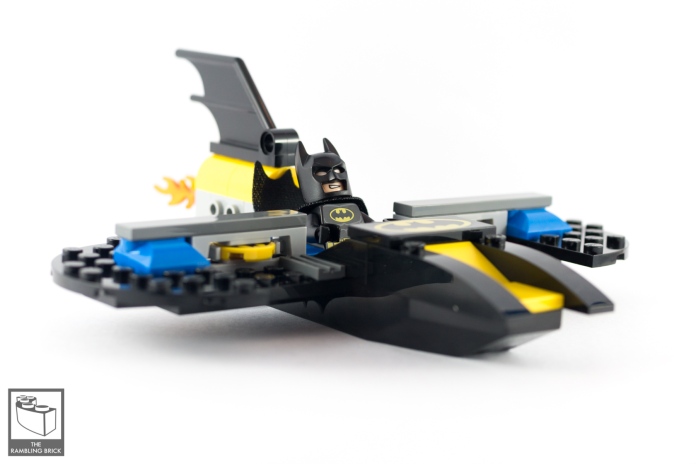 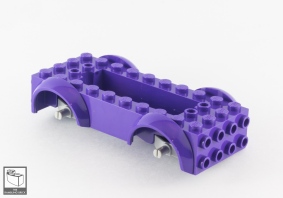 Our Jokermobile occupies bag 2, as well as the bonus chassis element, in purple (medium lilac) with light grey axle plates attached. Measuring 4 x 10 studs, with 2×4 studs on both ends, as a SNOT connection, and 2×6 studs ‘dug out’ for the driver’s seat.  Wielding a giant mallet, as well as lime green highlights, it is an intriguing sight.  We also have some ‘warning tape’ printes red on white tiles.  In a concession to advanced element usage, two clips attach to holders with bar (in turn containing some quality flame, for maximum intimidation. My favorite element here, however, is the 2×4 white tile with the Joker’s grin printed on.  It looks like if is just waiting for a BrickHeadz model to be attached to. 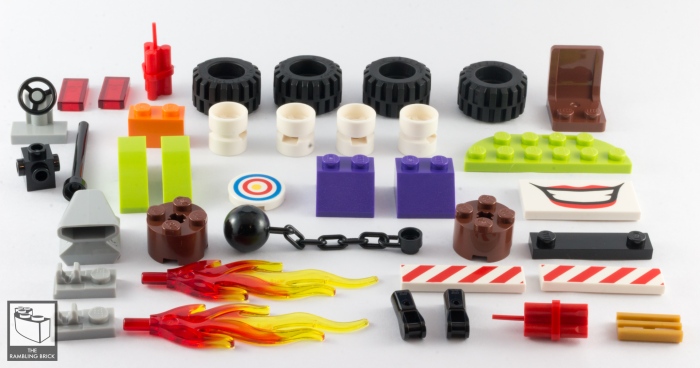 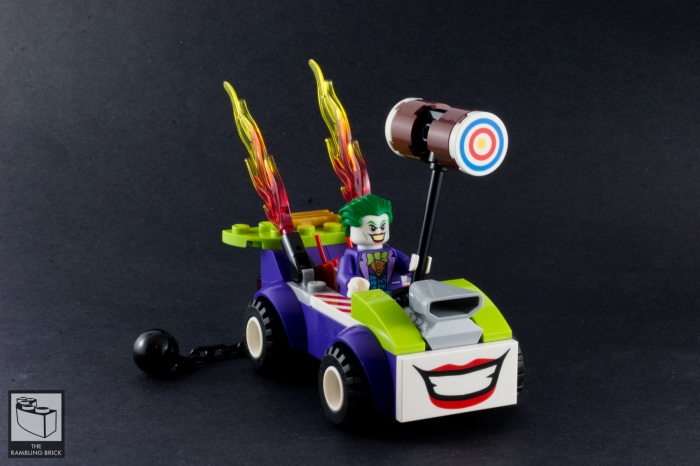 And finally the Batcave. 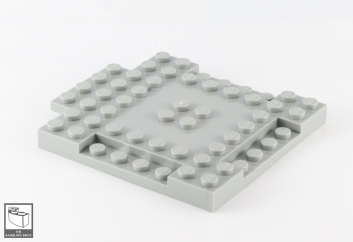 This year, the Batcave seems to have shrunk slightly, essentially fitting onto the 8x8x2/3 modified plate.  The Batcave is a simple construction, with some vertical gantries, a printed screen showing the bat plane ready to launch as well as a small cell and an additional Batcomputer. 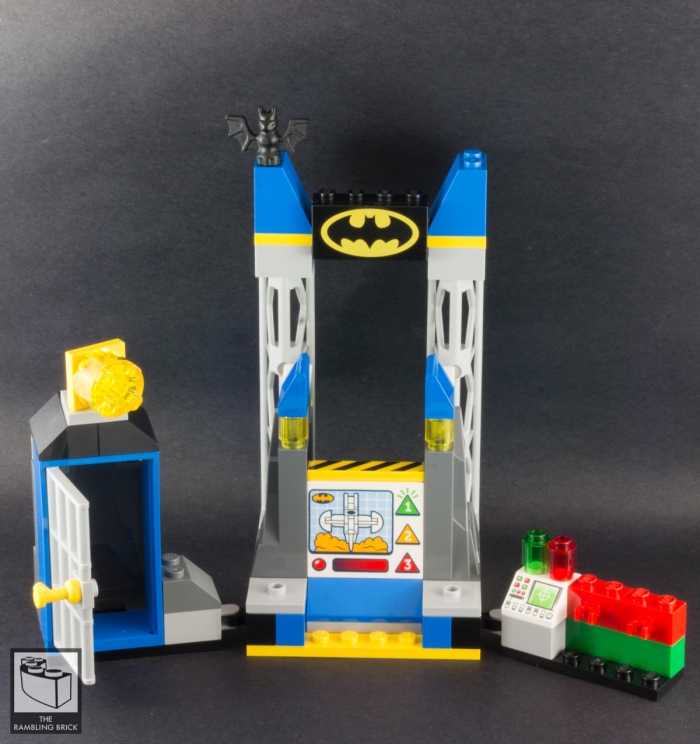 The most awesome feature, however, is the ease with which the Batplane can be mounted on the gantry, ready for a quick launch.  And being designed with a 4-7 year old in mind, we don’t need to worry too much for the details of how Batman finds his way into the jet. I found it difficult to reconcile the upside-down Bat Symbol here, so I turned the plane around… 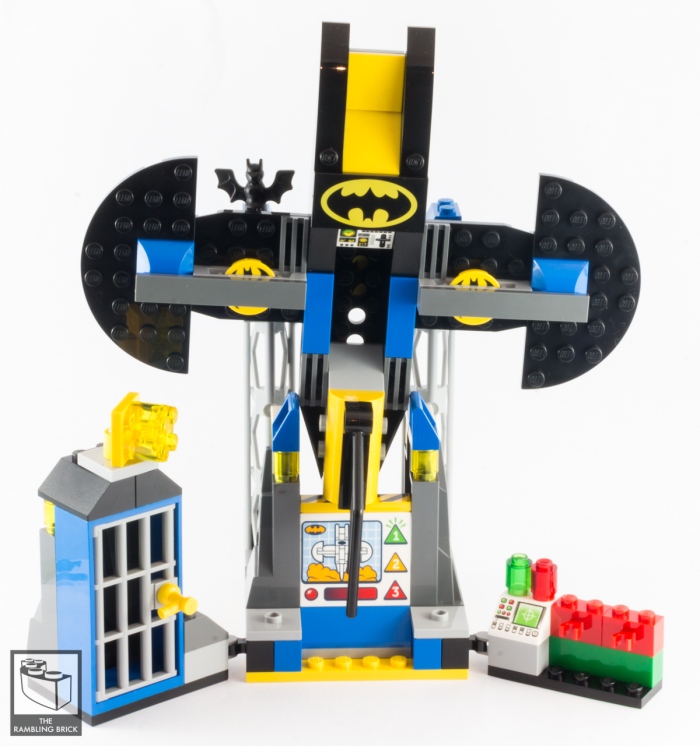 After completing the set, and taking a few photos, things really start moving. The Joker attacks Robin (again…) and Batman swoops down to the cave in the Batwing, in response to an emergency signal. The Joker runs, and flames burst from the exhausts of the Jokermobile, detonating the dynamite. The Joker is blown from the car and lands in the cell. A grumpy frown follows!

There are some great printed elements in this set – the yellow discs with the Bat-Logo, targets and computers, the 2×4 tiles. The warning tape – red and white, as well as black and yellow. And how shall we use the evil grin print? Then there are the non printed elements. The engine block is also a useful part to keep around for the future, as are the rock pieces. This is also one of the first times we see the 2×2 45ºslope in medium lilac. While the actual potential for alternative builds with this set on its own might be limited, there are some elements you may not find in a typical LEGO City, or Creator 3-in-1 set. And the minifigures are awesome.

One of the things that has changed with our town/city sets compared with ‘the old days’ is the sheer piece count. In 1978, when minifigures were brand new, and the town was just beginning, many of the vehicles were of simple construction: I can still build some sets of that era by heart. As such, I never felt any worry about having the set pulled apart, with the parts entering the general pool for construction in between time. And then, sometime between now and then, the standard ‘town vehicle set’ became a lot more complicated. It easily takes half an hour or more to put a set together before you can begin to play with it: to either swoosh, voosh or zoom around the room. Unless it is a larger, more substantial set, when it might take a hours to complete. But then you might be less than keen to zoom it across the floor at high speed, lest it veer off on an unexpected angle and crash into the table leg when you least expect it. Not part of my plan for an Ultimate Batmobile…

I have a theory about the increased complexity of LEGO® sets: as we see sets with a higher piece count, then the time investment to construct them acts as a deterrent to pull the set apart for parts, or to rebuild it for alternative play. Is this also related in part the the increased price we might pay for these sets? Do you pull larger sets apart, or do they remain on display? And what about intermediate size sets? I, personally, have challenges pulling apart sets that have been a satisfying build experience. Especially if there was a significant investment in time or money involved. Sometimes, i find it easier to just empty the unbuilt set into the parts collection (ideally sorting as we go…) – this was the fate of a Grand Emporium and Fire Station in the past.

With 151 elements, and costing $AU39.99, this set is difficult to justify on the basis of a price per element, although there are a number of large elements which I would expect to be more expensive. Exclusive figures and the printed elements also add to the value. But it is fun! There is a world of play here, and after playing you feel more than happy to pull the build apart, knowing it will be able to be put together simply and briskly.

I give this set three Arbitrary Praise Units out of five.

This is one of the more expensive Juniors sets at present, but with exclusive minifigures it will be a ‘must have’ for some collectors. The vehicles are simple and fun, and the Batcave contains all the essential elements, with the possible exception of a giant dinosaur and penny.

What about you? Do you see the Juniors sets as being Just For Kids, or do enjoy putting them together for yourself?

Until next time, Play well! 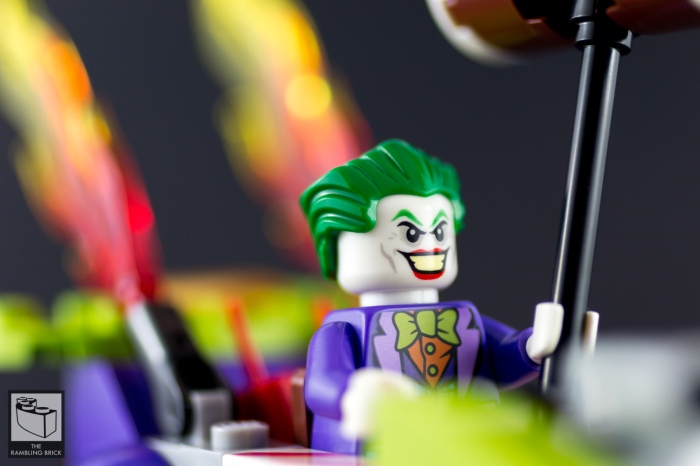 This set was provided by the LEGO Community Engagement Team for review. However, the opinions are are my own!