The Rambling Brick, and many of our friends are in Australia.  In order to distract ourselves from the rest of the world seeing the LEGO® Batman™ Movie this week, while we wait until the cinematic release at the end of March, I present this little diversion…  #SameBatTimeAusNZ

When the LEGO® Classic sets were launched in 2015, they promised an invigorated era of sets where bricks, plates and miscellaneous bits were what counted. It felt like a return to the Basic Building Sets of the 70’s, although  the evolved part and colour palettes see us now having access to a veritable cornucopia of colours, shapes and opportunities. Not so many options, however, that we don’t need to come up with creative solutions.  All of the Classic sets come with an ‘inspiration book’ – typically including a selection of models that can be constructed simultaneously.  The boxes are typically illustrated with a rainbow like arrangement of the pieces, according to colour.

So imagine my surprise as I entered a local retail space and saw boxes crowded together, labelled LEGO® Classic, but having a limited spectrum of colours featured in the box art. Now, it didn’t take me long to work out what was going on: I was aware that there were Green, Yellow, Red and Blue Creative Boxes coming out this year, but I had missed their arrival on shop.lego.com and hadn’t bumped into any reviews of them.

(Read on after the break… for more )

I was not prepared for their size, or price tag.  I hadn’t anticipated that these would be Pocket money sets – around 50 to 80 pieces per set, priced with a recommended retail price of $AUD7.99.  I had expected something a little bigger, and more expensive. On the the shelves at K-Mart (imagine walmart or Target, but Australian and possibly a little smaller) they retail for $AUD7 even.

I decided to pick up the blue box initially, as it had the nicest rattle. It also featured a nifty looking railway engine with pearl silver wheels, like a scaled down version of 31054 Blue Express, in this year’s Creator range.  So I took it home, and opened it up.

The first thing that struck me about the 10706 Blue Creativity Box  was the variety of colours to be found in it: bright blue, dark blue, medium blue, medium azureas well as transparent blue.  And there were some black, white, grey and transparent clear pieces; and the pearl silver wheels (without tyres) as well as a couple of yellow and flame yellowish orange pieces.  The contrasting colours enhance the models as they get built.

This is a small set, and all of the pieces to be found in it can be seen here.  Of note are the white round ‘eye’ tiles.

When I returned to the shop, I looked carefully at the range, and started to notice common elements within each set: a vehicle, a building and 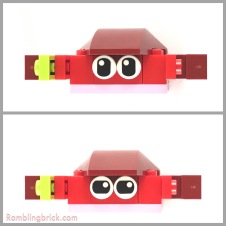 an animal, different eyes, and different types of black and white pieces.  You can collect all of them, and have very little excessive doubling up of unnecessary parts.
Then I saw the Red Box a little more closely: on the box was a picture of a crab with, I presume, a piece of seaweed in one claw.  He has eyes I haven’t seen before – they look a little more dazed and confused if oriented one way, and a little suspicious if oriented the other.  I picked the box up, handed over another $7 and headed home.  This handing over of $7 is a bit metaphorical.  In reality I waved a credit card over a computerised terminal and was magically greater in debt.

Opening up the the 10707 Red Creative Box I found the piece count to be a little lighter than the Blue Box, and wondered what else might be different.  I took the necessary knolling photograph and set about constructing the inspiration models…without using the instructions! Windmill, crab and racing car.

These two sets take me back to a time when I was studying for post graduate exams: and many questions would be of the Compare and Contrast 2 slightly similar but different techniques or products.  I thought I’d give that approach a run now…

The Red and Blue Creative Boxes were both released as part of the LEGO® Classic range in February 2017.  They are both inexpensive, priced at $AUD7.99, and come in a cardboard box.  Inside are two polybags containing parts and an Inspiration manual, with instructions for 3 models. these models can all be built simultaneously.

Although the same price and package size, the Blue set contains 78 and the Red box 53 pieces ( according to the inventory).  Both contain an extra ‘eye’ tile.

Both sets contain pieces in a variety of hues, based on the primary color of the box, as well as a selection of white, black and grey pieces.  There are also a few complementary colors to the primary color.

The Red creative box, however, contains a 4×3 wedge brick with no studs, as well as a number of curves and also several 45º and 70º slopes.  Arches, 4 and 6 studs wide, are also present in this set.  There is a red brick with a peg on the side to allow connection of the black propellor element.

Offset positioning can be achieved in the Blue set with a 1×2 offset tile, a 2×2 curved brick with 2 studs, or a 2×2 round tile with a single offset stud. No offset bricks are offered in the red Creative Box.

Also of interest…There are 4 Right 2×2 wedge plates.  There do not appear to be any left wedges present in the other color creative boxes.  Four white wheels all have tires, compared to the tireless pearl grey wheels in the Blue Box.

Eye tiles (1×1 round white tiles) in the Blue Creative Box have a ‘closed eye’ print, while those in the Red box have what appear to be a unique (at this time) print, of round pupil, with the sides of cut off.

Both sets have instructions for a building, vehicle and a creature: they are all simple constructions, which can be put together without reference beyond photos of the finished models.  The Red Box builds a simple crab, an intermediate racing car and an ‘advanced’ windmill.  The Blue box offers a simple house facade, reminiscent of a beach hut, an intermediate whale blowing a waterspout and an advanced dark blue locomotive.  The inspiration books also provide details of the set designers (who are different for each of these sets).  Suggestions for combining models between sets are also provided, as well as an extremely brief timeline of LEGO® history…

Value for Money: both sets have identical prices. At 78 pieces the blue box averages just over 10 cents per piece, while the Rex Creative Box averages a little over 13 cents per piece. I believe a better value/price point exists with some of the larger Classic sets.  Both sets are great, however, for providing a collection of varied, color themed pieces for a reasonable price, especially if below the listed RRP.

In summary, both sets have there strengths and weaknesses: the blue box contains offset elements as well as inverse slopes, both of which are lacking in the red box.  The red box does have the relatively large wedge pie and the unique eye print, but also has 4 wedge plates that remain unmatched, even if you collect the set of Creative Boxes. The included models are relatively simple but

Each of these sets earns three and a half out of five Arbitrary Praise Units, losing out particularly in the relative cost per piece.  The concept is solid, but the price/piece could be a little better.

Perhaps my exam technique is a little out of form: it took me 40 minutes, and I’m sure I missed something important. Then I needed to go back and correct the grammar and spelling.  As well as these two creative boxes, they also come in Green and Orange.

Do these sets hold appeal to you as an AFOL?

Do they make up for the loss of Mixels?

Will you get these, or look at the larger Classic sets?

Why not leave comments below, and follow the blog on email or on the Rambling Brick Facebook page.  Follow @ramblingbrick on Instagram where you will find other nifty  features such as legography and previews of upcoming blog articles.