Recently, the Rambling Brick held a contest to win The Ant-Man and the Wasp set, Quantum Realm Explorers.

The Brief was to build a MOC that would exploit AntMan’s ability to shrink or grow –  so either build a microscale model, where a Minifigure could look like a giant, or one where the minifigure represented a shrunken AntMan.  There is a prize of 76109 Quantum Realm Explorers for the winners in each category. Entrants were required to use a minifigure, but it was not necessary to use an actual AntMan Minifigure in entries.

Entries were open for roughly six weeks, and were accepted from around the world. A panel of judges was assembled from my network – a mixture of builders and community supporters.  They were asked to nominate their three favourite MOCs in each category.  (Three points for 1st; One point for 3rd). The builders of the MOCs were not identified to the judges at the time of judging.

Without further ado – here are the entries.

We received Three Entries in this category:

And the winner of this category:

One of the things I loved about these entries was the approach taken to customising an AntMan minifigure.

Magnus made great use of the new Unikitty collectible figure bases as a cloud, and you can clearly recognise the buildings represented here: Cafe Corner 10182, GreenGrocer 10185 and the Town hall 10224 , as well as the classic 12V Train 7740.

With Antman, or a minifigure depicted as the size of …well something very small, this was the preferred category to enter.

We had several entríes from El Davo, and his family. I was delighted to see Ant Man’s desk from Miranda(age 9) and AntMan’s buggy from Elijah (age 6). As for the 8th dwarf… who’d have thought? 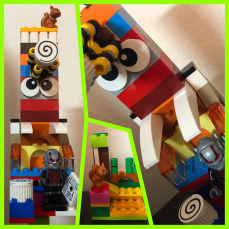 A few interesting entries from Instagram: Who would have thought of building a paper boat out of LEGO?

How good is this flower by Phil?  I love the bee, especially the technique used to build the wings.

AntMan needs a way to defend himself against accidental  getting trodden on, and this model by @dinosaurtales is a great example of multiple scales in use to convey a message.

Magnus’s Mousetrap features a brilliant mousetrap using the worm gear as a spring.  The European power point is the icing on the cake for me.

The Mouse Trap, by Magnus Hindsberger

Demarcation Media’s Sandisk Cruzer thumb drive is a great model of a device many of us had around the house.  Slightly larger than actual size, it really shrinks the minifigure down.

@frostbricks entry reminds me of his Food Stand Diners, currently gaining support on LEGO Ideas.  You should have a look and support them! That burger makes me feel so hungry!

I found myself worried for AntMan as the plug was pulled on the bathroom sink! There is so much to love about this model: the textured water, the toothbrushes, the hand pulling out the plug.

Lee Chi Wing’s Revenge on Thomas is a reference to the first AntMan film where Thomas The Tank Engine is enlarged during the final battle with Yellow Jacket (sorry… spoiler).  He he has returned to normal size, and we have a variety of tools ready to pull him apart if things get out of hand again.  I love the tape measure

And the Winner is…

“Squished”, by Ben Knights: If you are a super small human, then other humans wearing big boots in the mud might not look out for you! I love the way Ben achieved the shape of the boot, and the grooves in the sole. His choice of minifigure expression also captured the imagination of the judges.  The mixture of grey tones used might have not been intentional, BUT it gives a great feeling of the uneven colour of dirt or mud on the ground.

Congratulations to Ben and Magnus: 76109: Quantum Realm Explorers is on the way!

Thanks to all of the contestants who took the time to build a MOC and submit it for judging.  I hope you all enjoyed the challenge of the brief.  While there are only two main prizes, there will be a little something coming to you in the mail, so I will be getting in touch for a mailing address soon.

I would like to thank the judges for their deliberations. I appreciate their willingness to step up, and help out.

I hope to have another competition coming up in the next few months, so keep your eyes open. Why not follow the blog (or follow the Rambling Brick on Facebook)  I would encourage anyone to enter, regardless of your previous experience: it is only by practice that you can develop as a designer/storyteller and builder. Until Next Time…

Doug from @bendigobricks checks out the @fairybrickscharity tombola at #brickvention2020 This charity works to get LEGO sets to sick children in hospital, and will be working more and more in Australia in 2020. Every entry wins a prize so if you are visiting the Exhibition Buildings today, come and support Fairy Bricks
Jack Stone entered the maze, and emerged a changed man MOC by @rellie16 @robinson_am at #brickvention2020
Hanging out, watching Snow Angels at #Brickvention2020 #melbourne #legofanevent MOC by Ryan Masters. #snowangels #lego #ramblingbrick
Brickvention 2020 is on today, with the public expo opening this morning. Have you got your ticket? #legofanevent #lego #bv2020 #ramblingbrickvention
In Brightest Day, in Blackest Night; No evil shall escape my sight. Let those who worship evil's might, Beware my power: Green Lantern's LIGHT! Simon Baz joins the minifig Corps, and brings a great new power battery. Here’s a little iv enhancement with Hall jordan, John Stewart and Jessica Cruz. Part of DC superheroes collectable minifigures... review coming soon #LEGO #collectableminifigures #dccomics #greenlantern #ramblingbrick
Asking for a friend... are these clowns the reasons so many AFOLs get stressed about stickers? #lego #6000ideas #billandmary #indigoandpolkadot #ramblingbrick