So I have been talking about the LEGO House a bit lately.  It’s an exciting project, occupying the centre of Billund, due to open at the end of September. Like all new buildings in recent years of significance to LEGO, it has been immortalised in set form.  Unlike many of the new factory sets, this one is available to purchase at almost all businesses around Billund.  Except the LEGO Shop at the Airport, and LEGOLAND itself. You can pick it up at the bakery, the restaurant, the other restaurant, the supermarket and the LEGOLAND Hotel, just to name a few.  No doubt, many of these businesses have been impacted by the construction, and the chase for this set may be an attraction to get tourists to venture into town.  Now that the LEGO House is nearing completion, due to open in just over three months, the set is likely to have an extremely limited shelf life.

The Rambling Brick has been informed that it is highly likely that a new set based on the LEGO House will be unveiled once the facility is fully operational. No hints, clues or sneak previews have been presented.  Anything that follows is pure speculation.

But what about the set we have now?

Packaged in the same firm black cardboard box as the Billund Airport and Architecture sets, this one is somewhat unique: It is a LEGO model of a building that had not yet been built, but designed to look as if it were built of LEGO bricks, looking like a LEGO Model. And it does.

When you open the box, you find several polybags containing the parts.  On initial inspection, the majority of pieces are not especially unique: Black plates and tiles, some grey tiles, white bricks and tiles, transparent clear bricks and a couple of pieces designed to look like plants.  The only unique parts in this set are the printed tile labelled “LEGO House” and a minifigure torso with similar words printed on it. The manual is also the quality that we have come to expect from Architecture type sets:

There are 250 parts, and the construction is not especially challenging, although the constant layout of white on white on white did result in me getting a little disoriented on more than one occasion. I started searching for pieces that I had already placed, getting anxious that I couldn’t find them.  It turns out they were there all along!  It certainly conveys the sense of space that the LEGO House has, and leaves me looking forward to going to see it when it is finally open. Measuring 20 x 20 studs, however, it is just a little too large to fit properly directly into a standard Micropolis layout.

I wouldn’t credit this as a challenging build. It is  a good representation of the real LEGO House, as it has now come together. It is a fantastic souvenir of a trip to Billund, particularly of a trip where I had a chance to visit the Real Thing!

So, how does it compare with what we already know?  Google maps is not current, displaying the previous town hall in its place (demolished to make room for this building) The concept model in the building has the roof looking decidedly less white:

Our exploration of the roof space revealed it to be incomplete at this time, with some bare surfaces as well as with shredded, recycled tyres used to make a rubber surface on the roof, but certainly not on the terraced region.  We did find this mixing vat however, so perhaps there will be brightly coloured surfaces in due course…

The render of the LEGO House that has was presented with the press pack last year has a very similar appearance to the LEGO model on display in the foyer, although some of the colours are different: 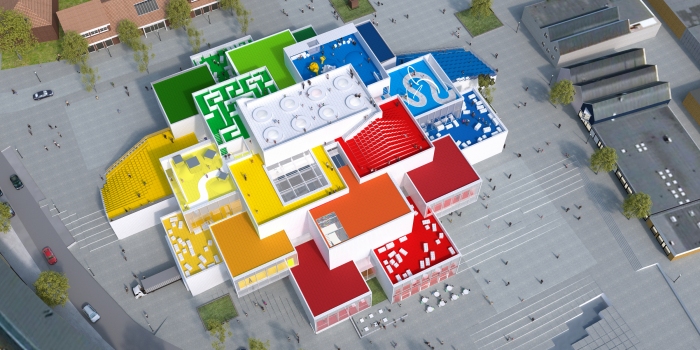 Perhaps I should look at changing the colour of tiles on the upper surface, to make it look a little more like the proposed building? So, off come the white and then I try to find what I can: I can mostly stick to the big colour groups seen on the roof of either version.  The tan on the brick model is more appealing to my current available tiles.  Who would have thought I own so few bright blue, bright green and red tiles.  A few more flame light orange would have been helpful too, but somedays you have to go with what you have.

The stairways are particularly effective with their covering terraced tile regions to either side, contrasting with the white underneath. This does help to remind us how colourful the building will appear to those flying in to Billund.  What of the lights? Dare I drill out the studs of a 2×4 brick, stuff it full of LEDs and then cover them over with round 1x1tiles? Not today. But perhaps a project for another day.

What do you think a definitive LEGO House Model should look like? LEGO Architecture style, but with colours to match the finished product? Exclusive light brick to light the Keystone? Ultimate Collector Size?

Let’s look to the future to see what appears.  Until then, why not comment below and…