The final set that I intend to purchase from wave one of The LEGO Batman Movie LEGO Sets, this was a simple build, but ever so elegant. Containing 139 pieces and with a RRP of $AUD34.99, this set comes with three mini figures, a vehicle and a small jewellery shop.

There are 2 polybags to this set, as well as a loose sticker sheet, the instruction manual and an 8×16 plate.  Please note, in this review, whenever I refer to ‘purple’ I am referring to the LEGO colour ‘medium lilac.’

The first bag brings us Catwoman, and her Catcycle.  I don’t know much about motorcycles: wheels, handlebars, engine, lights, fuel tank, exhaust pipes – I understand these to be essential components of any street legal motor cycle. Brakes are probably also useful. That is the extent of my daily working knowledge. This one also has a remarkable amount of style in black and purple, with occasional trim in pearl silver and light stone grey.  The wheel hubs are purple, and there are 5 printed pieces – the full tank/speedometer on a 2x2x2/3 curved slope, and four of the flat tile 1×1 half circle, with engine block detail printed on them.

The bike is simple enough to assemble over a technic style frame, and has some interesting techniques.  The bike is a more sensible scale than those in last year’s Batman-Harley Quinn Cycle chase. 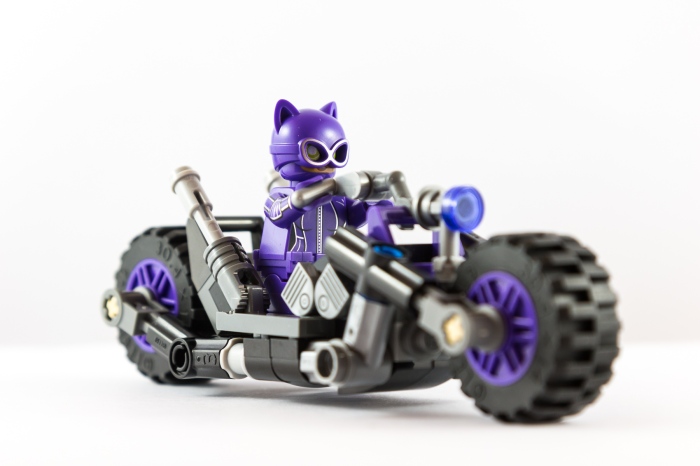 The second bag brings us a simple, but effective jewellery shop, as well as Batgirl, and Robin.  There is also a lamp post on the street block, to  add  some action scenes. There are a few stickers, and I felt they were all worth applying: 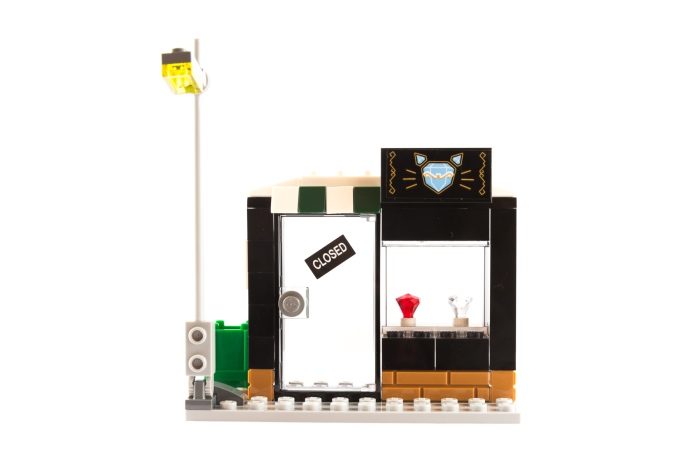 The figures in this set are absolutely fantastic. Each figure has something to offer, so I will talk about them individually, although I have pictured them together.

Catwoman: this is an exclusive figure to this set. Purple figure with black and silver printing on the torso and legs. She even has two coloured printing on both arms.
There is silver printing around the edge of her goggles.  She has a double sided head print, with a smile and a scowl.  Wearing a purple balaclava, and her eyes are obscured by printed goggle detail. The printing is sharp, and she works well as a version of Catwoman from the comics, even though she has been sporting black a little more often recently.  She also has a purple utility belt which otherwise appears on the Disco Batman Figure. Her head and cowl are both also seen in the Arkham Asylum set (70912). 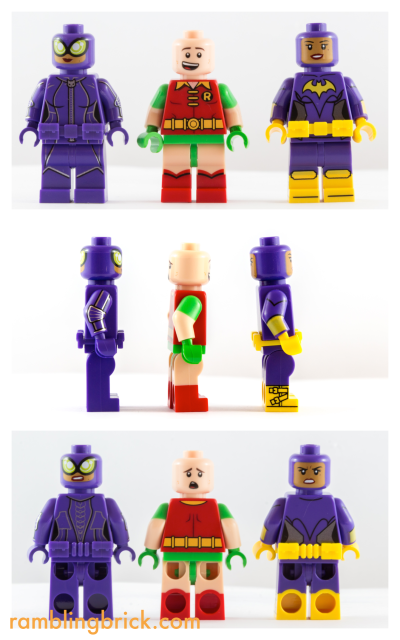 Robin: this is the same Robin as is found in the Batmobile set (70905). Alternative head for  Robin can be found in Arkham asylum (70912) and the LEGO Dimensions ‘Play the Complete Movie’ 71264. Robin’s torso features printing front and back consistent with the 1960’s TV series Robin, with a printed utility belt from and back. The arms are molded in 2 colors.  This may not be the first time we have seen this, BUT it is the first time I have! The upper arm is bright green, and the lower arm flesh tone.  (EDIT: So, after posting a picture on Instagram of Robin with his arm off, I was well and truly educated about the history of dual molded arms! They have been seen in many Simpson’s Minifigures, as well as Disney CMFs, and some of the regular series too.) His hands are also bright green.  His cape is shiny on one side, and less so on the other. His leg component consists of bright green briefs, and dual molded legs (flesh and red). These is also red and black printing on the from of the legs,adding detail to Robin’s boots. Robins head has two face prints, one looking enthusiastic, and another looking a little worried or confused.  There are also some subtle freckles out to the side. This head can be used with other mini figures, as his glasses/mask are incorporated in the hairpiece.  The hairpiece is also dual folded, with black for the goggle frame, and reddish brown for his hair.

Batgirl: Taking design cues from the 1966 TV series and the current comic Batgirl.  This figure is the same as featured with the Joker’s Notorious Lowrider (70906).  Alternate heads can be found in the LEGO Dimensions set, as well as the 30612 Batgirl polybag. Her purple torso features a yellow bat logo, as well as black and silver highlights. The arms have black details, and an extension of her yellow gauntlets printed on.  She has a yellow utility belt, as seen with Batman! Her legs are dual molded purple and yellow, and there is detail for her boots printed on the sides, as well as the front. Her cowl features a 3.18mm bar on the back.  A dark red pony tail attaches to this. I like the variety that this piece allows with regards to having the pony tail attached to not.  I suspect other uses will be found for this ponytail in the future. 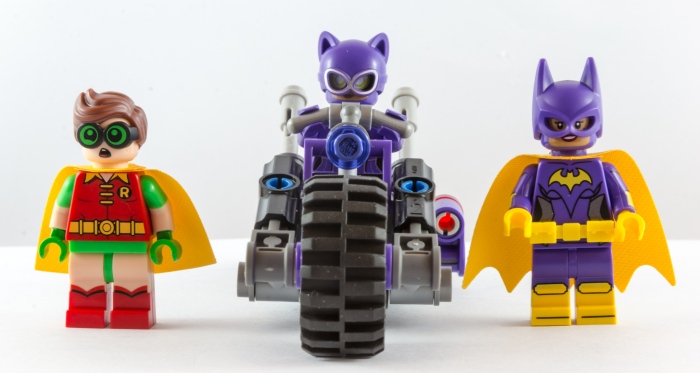 This set is the cheapest way to get Robin OR Batgirl at present. Let alone both of them.  The overall price of this set on the European and Australian markets certainly reflects the relative value of the mini figures, compared to the similarly sized Joker Balloon escape. The level of detail on these figures, including dual molding of arms and legs, compared to the relatively monochromatic ubiquitous Batman figure. The motor cycle is a great improvement on the one seen in 6858: Catwoman Catcycle City Chase. The building is nice, adding context and action, but not especially inspiring. I award this set 4.5/5 Arbitrary Praise Units, predominantly on the strength of the three mini figures. If you wish to get Batgirl and Robin in a set, this is the most economical way to do it!

This ends my series of LEGO Batman Movie Rapid Reviews.  Which is your favourite set in the first wave of sets from the movie? Leave your comments below.