Skip to content
HomePlay on: LEGO City My City 2

As I browsed through my mobile platform’s App Store recently I came across a LEGO game that was new to me, the somewhat awkwardly titled LEGO City My City 2.  Having missed both the placement of a colon and LEGO City My City 1, I had no idea of what to expect.

Perhaps more correctly LEGO City: My City 2, this is an app bundling various LEGO City  games for your favorite mobile platform.   Unless your favorite platform is Microsoft Mobile… If you prefer to play on desktop, you can find them here.  Th play experience is superior on the mobile platform, as the games are already loaded and ready to go!

Construction missions and Games are based around this year’s LEGO City Subthemes: Police, Prison Island, Fire, Airport and Volcano Explorers.  First you select a mission to complete – a number of bricks are required to be collected to complete these missions – building a new fire training facility, rebuilding an airport and so forth.  There are then a variety of mini games to play in order to gain studs.  Studs are gained by passing over them in the game field, completing the mission in the allocated time, and also a time  bonus.  Studs are converted to bricks at the end of a game.   The current exchange rate seems to be 10 studs to the brick. 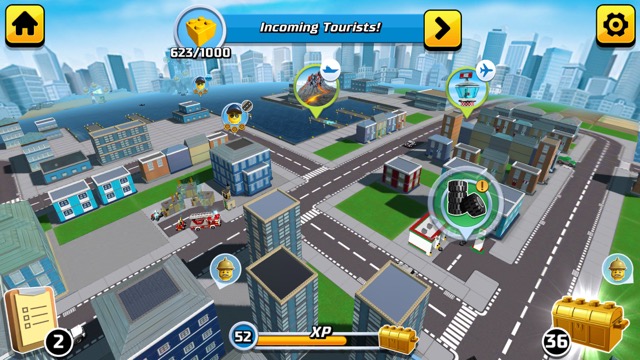 All missions are a variation of one of the three listed here:

Each game gives you a new vehicle to drive/fly for the first three times it is attempted.  You do not need to reach the goals in the time limit to get the new vehicles unlocked.

For example, playing the fire/helicopter missions, you first fly a large, slow helicopter, the next level a smaller, more manoeverable chopper, and then you get access to a flying builders lavatory, with helicopter rotors or wings.  It looks a little  like the TARDIS, tumbling between the rooftops.

As you complete constructions and gain experience points (XP), you unlock components of vehicles to allow a degree of customisation, such as wings, water cannons and a variety of wheels and treads.  The ‘Caterpillar tread’ allow a car to drive over rough or dangerous terrain (such as grass or lava!) faster. Helicopter rotors added to a car gives you the ability to jump over obstacles.

The games are easy enough to get the hang of, but I had a bit of a learning curve to climb to master the steering.  Steering can be achieved using a steering wheel, to gently nudge into position, or left/right buttons.  You only need to touch these to initiate a turn.  Constant holding of the steering buttons  result in frustrating death spirals.  This took me a few games to master.  The steering wheel option and offers a reverse control.

The games are simple conceptually, but not too easy to execute: I found this to be related to the challenges in manoeuvring your vehicle. Targets can be a tricky to locate in a field of activity, even though a gently glowing cylinder rises up around them, and some games get a floating arrow in the air to point you towards your target.

The Individual Construction Challenges include:

There are, as you would expect multiple levels for these construction challenges.

Individual Minigames (In approximate ascending order of challenge) include: 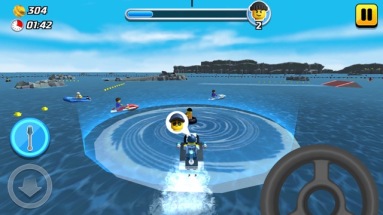 As you complete mini games and collect XP you gain ‘build pieces’.  These can be used for the third level vehicle in any of the games, allowing modification – tracks for rough ground etc.  There are 64 of these elements/assemblies to collect as the game progresses.  Some improve your performance, and some are just hilarious.

The games are conceptually simple, and the controls take a little getting used to, but I found the games enjoyable and repayable.  Gaining elements to allow customisation of the vehicles adds to it’s appeal, and reminds players that you do not need to build a vehicle according to its instructions.

I recommend this for anyone looking for a ‘chase’type game.  I give it 3.5 arbitary praise units.  I am happy to play  and replay this game, but I have not become such an addict or completionist about it that I will not be able to walk away from it before collecting all of the elements to be found.